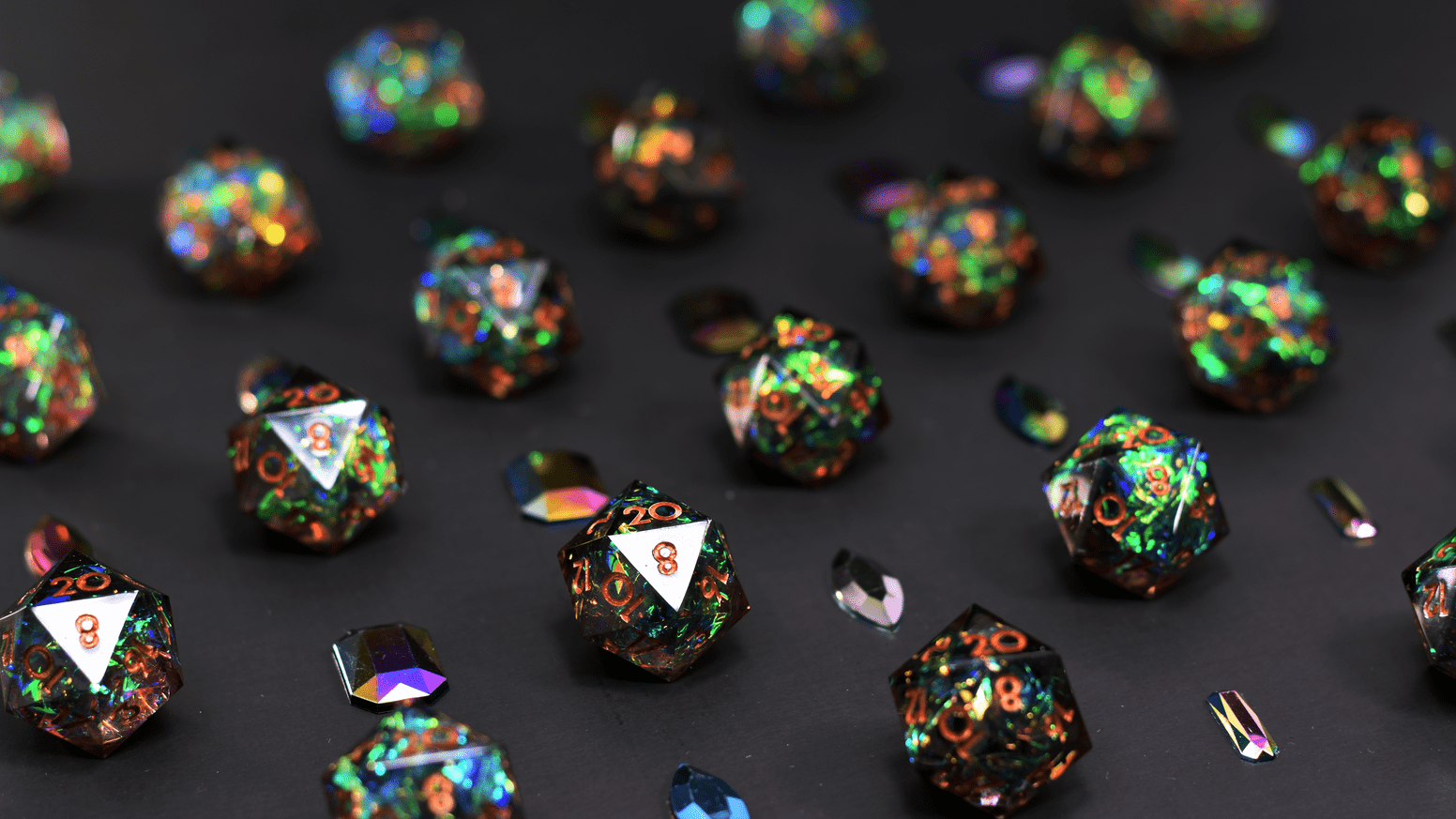 Tabletop gaming is more than just a hobby for Dispel Dice creator Karen Wang — it’s been an important emotional, social, and artistic outlet for her. When she started sharing photos on Twitter of the designer, handcrafted dice she’d created, people wanted to buy them. Wang felt that producing her dice on a larger scale would be a great way to contribute to a community that has meant so much to her. To do this, she turned to crowdfunding, launching her first Kickstarter campaign in 2019.

The gorgeous, multicolored, sharp-edge dice were bound to attract a large audience. But Wang never thought the Dispel Dice Kickstarter campaign would be as successful as it was. She set a $20,000 funding goal. By the end of the campaign, she’d raised more than $2 million. Raising 100 times your original goal is impressive for any creator, but it’s especially remarkable for a first-timer. Although Dispel Dice’s performance was unexpected, Wang wisely set up the infrastructure to handle this type of success. She worked with friends, mentors, and BackerKit to get prepared.

Like many first-time creators, Wang was nervous going into her campaign.

“I was constantly thinking ‘What if no one buys my dice? What am I going to do?’ I’m using all of my money to get here. So it was very frightening,” she says. “When I think back to that time, I was basically a nervous wreck every day leading up to the campaign.”

However, Wang’s friends, several of whom were experienced crowdfunding creators, told her that she’d actually need to prepare for the project to do a lot better than she hoped it would. Obviously, they believed in her and her work, but Wang’s friends were also speaking to a larger crowdfunding truth. Pre-launch preparations should not only pave the way for you to hit your funding goal, but also make it possible for you to manage a campaign that exceeds your expectations.

What would she do if she had thousands or tens of thousands of backers? How would she handle fulfillment? Would she have the bandwidth or expertise to manage all of that backer data? Despite her nerves, Wang was mulling over these types of questions as she developed her campaign plan.

Even with guidance from experienced creators, Wang knew that there would be things that she’d only have insight into once she started her campaign.

“My background isn’t in operations or logistics or shipping or fulfillment, and so I really didn’t know what I was going to need,” she says. “And I didn’t know what some of the problems were going to be with Kickstarter’s software or organizing the backer information.”

Wang was also concerned about how she’d calculate shipping costs. She didn’t want to end up overcharging and also didn’t want to have to foot the bill because of a miscalculation. She wondered how she would calculate sales tax per state and which states she was going to need to pay sales tax in. She’d known people who had run businesses and faced these issues, and understood that these were areas where a lot of small companies stumble.

Other experienced Kickstarter creators suggested that she use BackerKit to tackle these challenges.

She decided that she would use BackerKit Pledge Manager to survey her backers after her campaign ended and manage fulfillment.

Take a look at the comments on the Dispel Dice Kickstarter page and you’ll read glowing praise like, “I’ve been waiting to throw money at your for months” and “these dice are gorgeous. Who wouldn’t want them?” People were excited about this campaign, even before it launched. At the time, designer DnD dice collections — particularly the high-quality, luxury dice that Wang was creating — were rare. This project stood out.

On the first day of the campaign, Dispel Dice surpassed its funding goal, raising $1 million and unlocking all of its stretch goals. 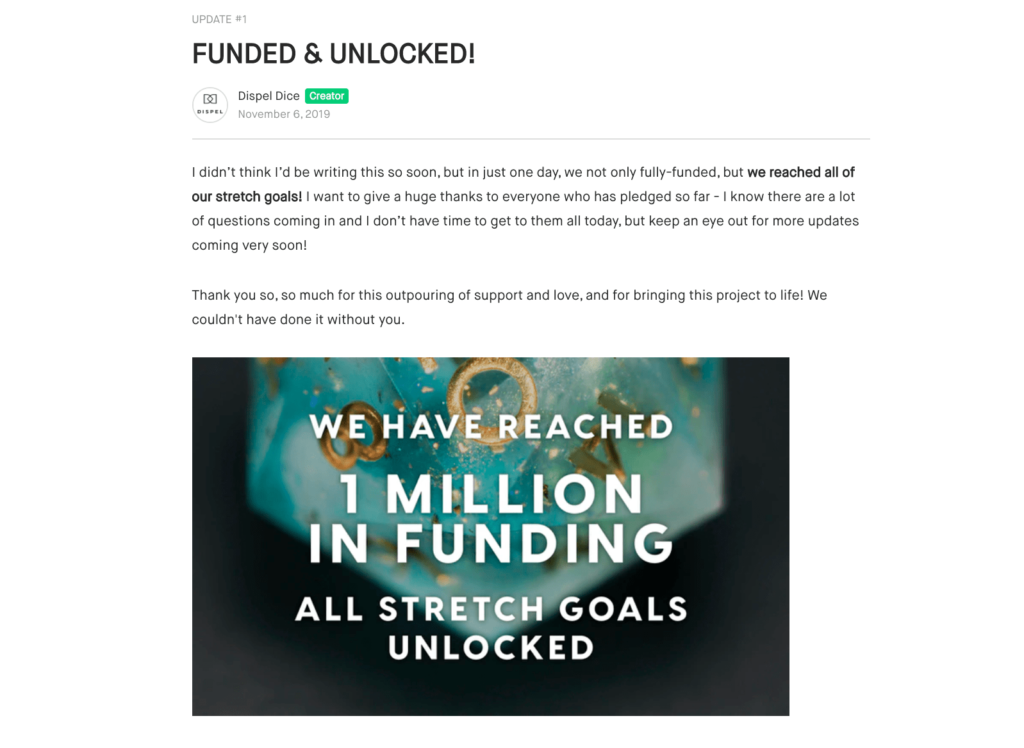 This level of success doesn’t just happen by chance. Before launching, Wang and the Dispel Dice team worked hard to bring attention to the project.

“We sent out some sets to people to preview. We sent them out to influencers and friends as well. We had a small sample sale prior to the Kickstarter, so that people could at least see them and hold them,” Wang says.

They also worked with a few media outlets, including Polygon and Kotaku, to get coverage on the project.

Their outreach efforts in combination with the quality of the dice were two major factors contributing to the project’s performance. By the end of the 32-day campaign, Wang and her team had raised $2,392,156 with the support of 20,135 backers.

Wang wanted to provide her backers with the best experience possible. They were all so excited about the project, and disappointing them by flubbing fulfillment would be unimaginable to her. That being said, 20,135 backers is an overwhelming amount of people to contend with. Post-campaign, BackerKit helped Wang keep all of her backer information sorted and prepared for fulfillment.

“To be able to have all of our order data where we can update it very easily in one place, search our backers, charge them for shipping and taxes all in one place, that was really important for us,” she says.

Her two big pre-campaign concerns — calculating shipping and taxes — could be handled with BackerKit. By setting up Tax Rules, creators can charge an additional percentage based on country or US state. And with the ability to charge for shipping after the Kickstarter campaign has ended, BackerKit helps creators avoid making costly miscalculations based on estimates made before they may know the total weight of each backer’s order or costs associated with add-ons. 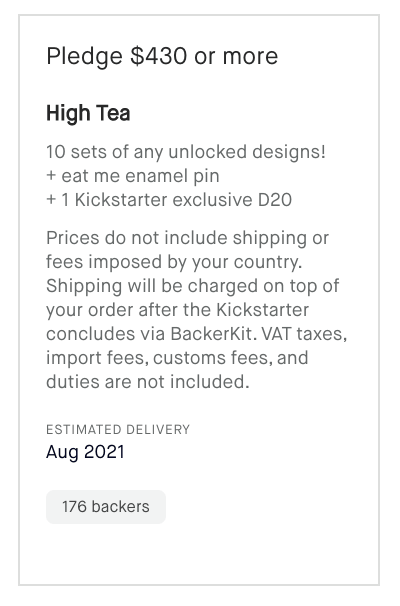 Aside from the common crowdfunding concerns that Wang anticipated, she also had a few project-specific issues that BackerKit simplified for her. There were a number of different item variations with the Dispel Dice Kickstarter campaign. To enable backers to choose the options they want while filling out their post-campaign survey, Wang would need to set up item stock keeping units, or SKUs in BackerKit for each variation.

When you have a lot of items and options, you can end up with a lot of different SKUs. BackerKit Lead Customer Success Manager Antonio Rosales worked with Wang to keep the SKUs manageable and devise a solution that would work for her campaign’s unique needs.

“We actually had to create additional SKUs for each tier level because the dice sets cost a slightly different amount per tier level,” she says. “For example if you buy two sets it’s cheaper than if you buy one set, and as a result, that’s a completely different SKU. Having BackerKit be able to organize and set that all up for me was very helpful because I’d never done that before and I didn’t want to set up something like 800 SKUs.”

Wang found BackerKit’s platform to be intuitive and she appreciated the assistance that was offered when tackling these kinds of unexpected issues.

With BackerKit, creators have the opportunity to raise additional funds through add-ons — extra rewards that backers can purchase in addition to the items they receive for their pledge — and by creating a pre-order store — a site where people who may have missed the campaign can purchase items. 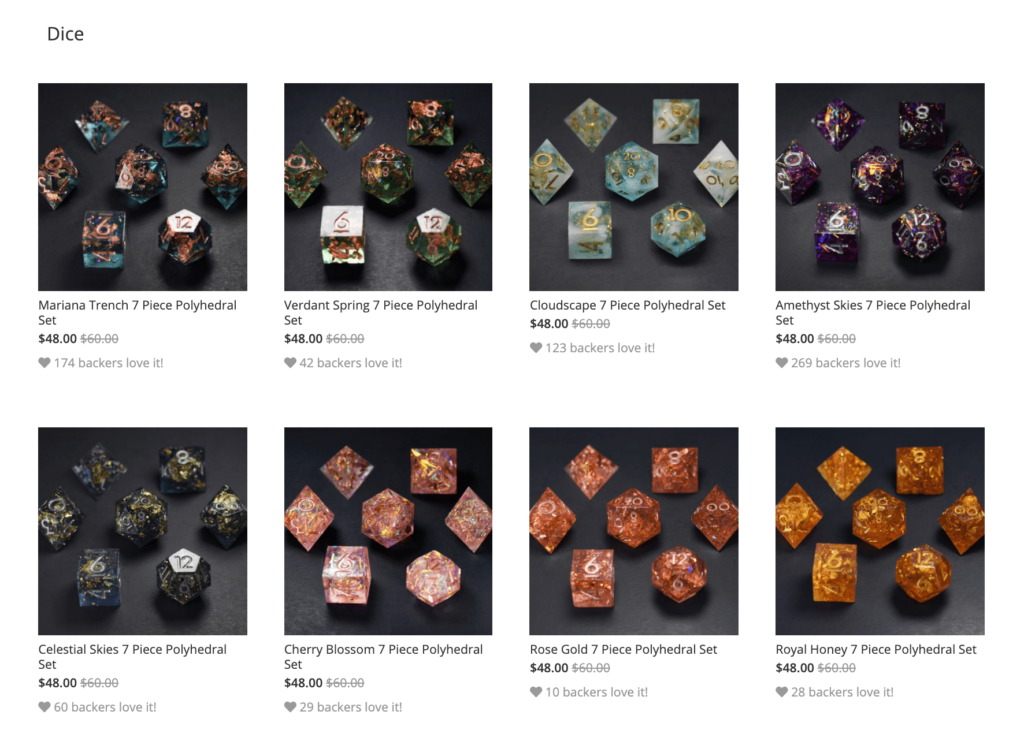 Wang implemented both, adding $875,052 through BackerKit after her campaign had ended.

Though Wang initially only intended to use BackerKit to survey backers and manage fulfillment, the BackerKit team worked with her to develop other strategies to amplify the work that she’d done on her own. For example, Wang had put a lot of effort into building her community. By the time Dispel Dice launched, she had over 40,000 people on her email list. Having a strong email list is a fundamental part of crowdfunding. Mobilizing these supporters is the key to building a campaign’s momentum. Before the campaign ended, the BackerKit team suggested that Wang use BackerKit Launch for a final promotional push.

BackerKit Launch is a crowdfunding email marketing platform that helps creators leverage their audiences to reach their funding goals. Because Launch directly integrates with Kickstarter and Indiegogo, creators are able to see in real-time who on their email list hasn’t yet pledged to their campaign. With that data, they can create targeted email marketing messages to encourage that segment of the list to pledge.

The Dispel Dice team used Launch to let their community know how much time was left for them to pledge. 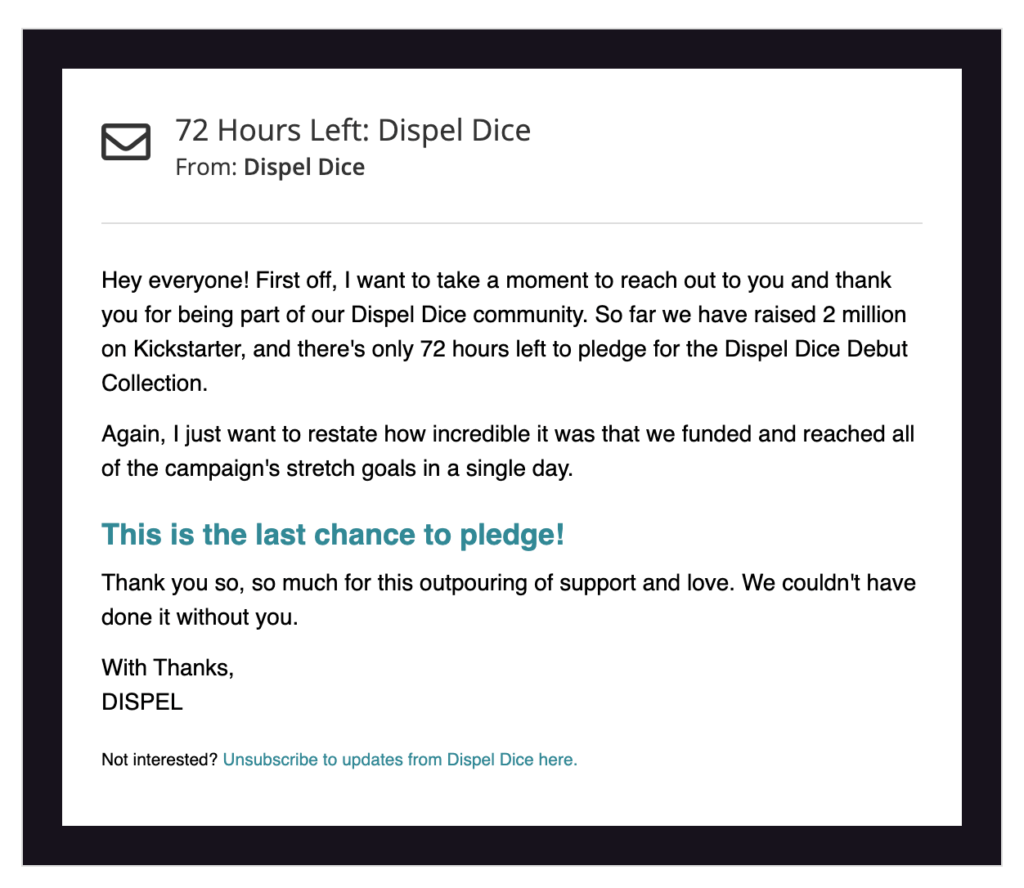 Wang and the Dispel Dice team are currently focused on fulfillment. Because of the scale of the project, there will be two different shipping waves — one in 2020 and one in 2021. BackerKit is making this process easier.

“Being able to send out a lock down address form, so that we can say ‘don’t fiddle with this’ to a specific segment of our backers was incredibly helpful,” she says. “Because we have the 2020 and the 2021 waves, we didn’t want to ask people in the 2021 wave to lock down their addresses until we were ready to send out their orders.”

The success of the campaign has allowed Wang to start building out her team. And while fulfillment may be the top concern right now, she would love to create more in the tabletop space.

“I think when I visited the BackerKit office, one thing that was really incredible was that I’m walking by all these products that were just an idea at some point and were brought to reality through the combination of work between a bunch of small businesses, creators, and the customers that were willing to take the risk and crowdfund it.”

Are you a tabletop creator preparing for your upcoming launch day? RSVP for our webinar on crowdfunding your tabletop game to learn everything you need to know to set yourself up for success. And if you’d like to find out how BackerKit can help at each stage of your crowdfunding journey, please contact our team. 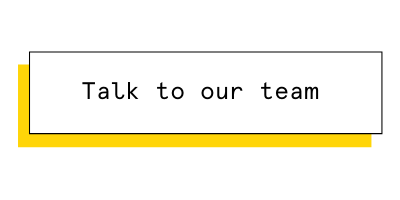