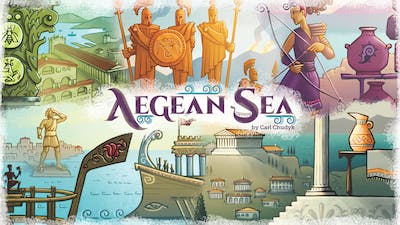 Proofs and Schedule
6
0
14
1 day ago
by Asmadi Games
Hello friends! I apologize for the quietness over the past month or so - without going too far into it, it's been a pretty rough time for me personally, and I haven't had as much time as I'd hoped to for game business things. Doing my best to get as much done as I can, and thankfully I do have news to share for Aegean Sea.

Specifically, we're on schedule to have production stuff start up with the factory after Lunar New Year, but before we submit the final files, we'd love to have you all take a peek!

You can find the cards (both individual island and home) and rulebook up at https://asmadigames.com/sea/proofs (three PDFs, 25MB total). We've gone over them ourselves, but we welcome any feedback. A number of wording clarifications and small clean-ups have happened since the campaign, and we hope the game's in good shape.

You'll notice that the rulebook ends abruptly - we're still compiling a FAQ, but we feel that the rulebook should be theoretically complete without it - if there's anything that isn't fully explained already, we want to know! The FAQ is there mostly for odd edge cases, and things that are in the rules that might not be obvious at first. You can submit feedback here as comments, or via email to asmadigames@gmail.com.

We don't have a precise schedule for delivery yet, but we'll update you with boat dates as soon as we have them. Our goal is to have this available in the spring or summer, and we'll see if the Ocean Freight gods (Posiedon?) agree.
Read the full update
Visual updates!
15
0
15
3 months ago
by Asmadi Games
Hello friends! Thanks to each and every one of you who've made this campaign an overwhelming success. It's been a hectic couple weeks and I did not get to do nearly as many streams and things as I'd have liked, but we've been working behind the scenes on some updates to the game based on feedback we've received from you all.

One of the most crucial things we've been aiming for with the edits to Aegean Sea over the past couple years is making it easier for first-time players to play (also something I've worked hard on for One Deck Galaxy!). The concept of an island's preference, and the fact that it differs from the color of the card itself, is tricky. Once you get it, it's simple, but between the streams and other first-time plays I've witnessed on TTS over the past few weeks, we realized we needed to beef up the up-front info a bit.


Each island's preference was always in three places - the stripe, and the corners. We've added it to be a clear subtitle under the island name itself, which helps when you're fanning cards out in your hand, and also really reinforces the concept for a new player. We've also updated the presentation of the stripe (now cleaner and rectangular instead of trapezoidal - an artifact from some previous ideas), and changed the corners as well. The corner reminder is now both larger, and shape-differentiated per type (remember that only one corner reminder will be showing based on where a card is tucked!) This should aid both colorblind players and anyone playing in low-light situations. Finally, if you're looking closely, you can see that we've updated the line style on the card. We've gone with a cleaner presentation both for the four icons on the edges, and for the people-based filigree that surrounds the corner reminders.

We've also been making various updates and corrections to the rulebook and cards, and we'll be posting proofreadable copies of everything that's been changed after the campaign concludes and before it's time to go to print. We're still aiming to press the print button on this in December. Thanks to everyone who's tried out the game and sent along feedback! It's super helpful.

PS, for backers:
Read the full update
Happy Friday! Crowdfunding: Goals, Real Goals, Advertising, and Momentum!
17
0
7
3 months ago
by Asmadi Games
Hello friends, and a happy Friday to one and all. I hope you have some good gaming or other adventures planned for the weekend (Myself, I will be curling tonight! Yes, the sport with the ice and the brooms and the stones). We're sneaking up on 300% funding and 1000 backers, which is pretty neat, so I wanted to share some of our crowdfunding strategies and philosophies with you all.

In the last update I made a little joke about "real" funding goals, and perhaps some folks are curious about what our own projections and thoughts were heading into this campaign. We've run many in the past for a variety of games with a wide variety of funding levels. Aegean Sea is a little bit of a niche game, albeit one that I think a lot of people will enjoy once they get to try it out. We set our goal low at $10,000, because that's a big chunk of what it'd cost to do a minimal print run of the game (2-3000 copies). 350 backers didn't seem like too much of a stretch, so we were pretty confident we'd get there. Our thoughts were that if we could get to $25000 (~800 backers) it'd be a good success, and the 1000-1500 backer range would be a great success. If we hit 2000 or more? That'd be amazing!

Having more backers on board gives us confirmation that the thing we think is cool *is* cool, and it also means that we can print more copies up front. Traditionally, the difference between a couple small print runs separated by half a year and one large print run hasn't been too large. You would get a modest break in the unit cost of the game, but nothing that's going to really move the needle. With shipping rates the way they are now, though, consolidating those two small runs into one large run (and thus, one boat trip) is actually quite significant! Having the confidence to create more copies in the first print run is a huge help (and for that we thank all our backers!)

As you may have noticed, we've kept this campaign very simple. We have a game we enjoy, we want you to be able to pledge + lock in a copy that you'll receive before the mainstream release, and that's it! Aegean isn't really a game that lends itself to a bunch of different extra bits, gameplay or otherwise. We're also keeping things very simple with how we're advertising the game. We've used almost exclusively our direct reach of emails through our own list and BackerKit's help with all our past backers. Quite honestly, we don't feel excited about handing any dollars to Twitter right now, nor Facebook (okay Meta, whatever), and so during this campaign? We're not doing it! (Before the campaign, we did run a small test set of ads to generate some email signups/follows.)

But what about momentum? Oh no! The campaign will slow down and...dire consequences! In olden times, crowdfunding campaigns were a grind of slowly getting the word out, shouting to your socials hourly (people loved this, of course). Things have evolved - by sending out word to all our fans directly by email, we scooped up a much bigger group of people to back on the first day. So over the first week, we get about the same number of backers as we would have before, but most of them pop in on day 1-2. Is that worse? Nope! Just a different data curve. So don't worry if things look "slow". We're fine! We're happy with how many of you are already here on our adventures with Aegean Sea :)

What's next? In the absence of ads, we're going to be doing more streams next week instead! On Tuesday night, we'll be hosting another stream on our Twitch channel with Anya Combs, certified cool individual and crowdfunding expert. On Wednesday night, we'll be sneaking over to another channel to play another demo with friends, who even made a cool image:

They're also cool, but their certifications are still pending. Lots of red tape with coolness, you know.

Hope to see some of you there!

And of course, what update wouldn't be complete without a secret message just for our backers:
Read the full update
It has been a Day!
39
0
11
3 months ago
by Asmadi Games
Greetings everyone, and thanks for your support of Aegean Sea! We passed our funding goal yesterday, and are up over 700 backers and 200% already.

Unfortunately, our actual secret "real" funding goal was thirty seven point nine million dollars ($$$), and it just doesn't seem like we have the momentum to get there, so we're going to have to cancel the cam-

Yeah no :)  We're thrilled with the support so far! Aegean Sea is maybe not a game that will hit the top of the sales charts, but it's a fun, clever, unique game that we want to share with as many people as we can. We're not doing any stretch goals or things like that- the game is complete!

Some folks have pointed out some typos on the current cards and omissions in our beta rulebook, we'll be taking care of those and shoring up the pretty-factor of the rulebook in the coming weeks.

This is our first campaign on BackerKit's new crowdfunding platform, and we like it so far! In fact, in this update, there's even a section called "Backer Only", so I think I get to write a secret message just to backers. Let's find out:
Read the full update
Back It