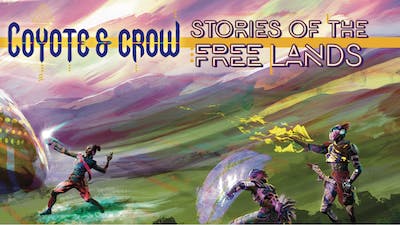 Today is a big one for Coyote & Crow. First though, I want to say thank you to so many of you who promptly filled out your surveys. Of 2400 backers, we have less than 200 who have not filled theirs out yet.

So, now onto the rest of the news. I sent the first wave of backer info to our shipping partner, PSI, on 11/2. I expected shipments of physical rewards to go out within the week. However, they were (for some reason I cannot fathom) holding onto those orders until they received "the rest of them". As of this morning, we've cleared up this misunderstanding and according to them, everyone who has filled out their surveys and had their shipping charged, should(I feel like I have to use that word)have their products out of our warehouse door by this Friday 11/18.

However, that also means that you'll all be getting your rewards after they've launched into retail, which is - today, 11/16. My hope had been that by getting that information to PSI by 11/2 some of you would already have your physical rewards by now but that is sadly not going to happen. You have my sincerest apologies on that front.

If you haven't filled out your survey yet, get on it! (<--thanks)

Stories of the Free Lands

We're still working on development and layouts for these. I was really hoping to have them to you before the end of the month, but it's looking increasingly like this will have to be pushed back to the end of December. Progress is being made but we want to ensure that these stories are not only good stories in the small "s" definition of the word, but also good Stories, in the game mechanic term.  So bear with us. We'll have them to you soon.


Hemlock And Sage
Hemlock And Sage, the first novel from Coyote & Crow is finally releasing as well! We've been working on this for more than a year now and author Tali Inlow (Cherokee Nation) has really crafted a fantastic first book set in the world of Coyote & Crow. You can get it throug our webstore, DriveThruFiction, and Amazon for digital formats currently. You'll also be able to get physical copies (print on demand) shortly through DTF and Amazon.

PAX Unplugged
I'll be personally at PAX Unplugged next month. There will not be a Coyote & Crow booth this year (and we currently do not have plans for any booths at shows at the moment). But I will be there, playing games, doing some play testing, speaking on at least one panel and taking some meetings. If you see me, please do say hello!

Creep
If the name Creep doesn't sound familiar it's because we haven't announced it until now! Creep is the stretch goal story from author Allen Turner (Lakota). Allen has finished his rough draft of the story and we're bringing back Coyote & Crow alum Tate Allen (Choctaw/Pomo) to do the art! We'll be working on this story concurrently with the Stories of the Free Lands stories. It will be delivered through BackerKit to all backers who pledged at the $20 level or higher. Allen's really bringing his A game!

Discord & Twitter
While we're keeping our Twitter profile active (and it's growing daily!) it's quite possible that the platform could implode at any moment. If you're interested in keeping in touch with Coyote & Crow but Twitter isn't your jam or you are getting out, I highly recommend our newsletter and our Discord. Both are great ways to keep up to date.

That's all for now.*
*We're going to have two more small surprises before the end of the month that we're going to announce through our newsletter and our Discord only.

Thanks/Wado,
Connor
Log in to join the discussion
Top Comments New Comments
5 comments
Back It