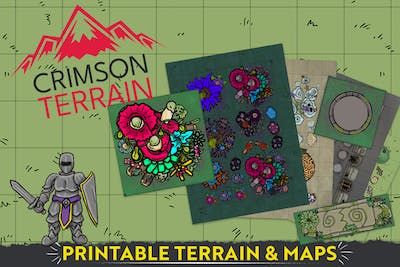 Back to discussion
Replies to Crimson Terrain: Do you have questions? I've got Answers!

Hey, Anthony! It's your lucky day! I have a question, an insight, and an answer. First, my question is about the Terrain Takedown vote. Several of us have voted in "Project Update: Terrain Take Down Round 1! + Crimson Spire adventures & More!" I see, however, that you have a separate Pinned Discussion, just called "Terrain Takedown Round 1" in which no one has voted because we all voted in the first discussion I mentioned here (so far). To avoid confusion for you (and/or us), would you like us to reiterate our vote in the new pinned topic, or would you just prefer that we vote in one or the other place, and you can count them up easier that way at the end? Next, my insight is based on your "Free_Terrain_Preview" 2-pager that includes Jungle type terrain in light and dark formats. It would make sense for the night version to mirror the day version rather than have the same layout as the day version as it appears now. This allows for the terrain pages to be printed double-sided so that, when cut out, the same terrain piece can be flipped over from day to night (so I can have the nighttime snail on the back of the daytime snail). And, finally, my initial answer about printing costs through Fedex Office Print Online for terrain. This information may be useful for anyone else who plans on using a professional printer, and maybe you have some additional insight, making this a semi-question. The price of lamination varies based on the thickness of paper stock used. I'm unsure whether index card (110 lb) stock is better to use than 32-lb paper stock when laminated, whether one is more "bendy" than the other. My local US price for a 32-lb sheet of laser printer paper printed in color, then laminated, is $3.09 single-sided or $3.74 double-sided. (Now you know why I would prefer flippable terrain rather than having to print daytime and nighttime on separate sheets). Cutting is not available by them for laminated work, but I know from the 1985 Games terrain that I mentioned in the first Discussion I list here where we talked about my printing costs that theirs is cut by the recipient, so there must be a way to cut laminated paper, and I'm guessing that ease may have to do with the paper thickness. Do you have a recommendation of how thick of paper to use before it gets laminated? Finally, I wouldn't want them cutting for me anyway after I saw their options. They only cut a page in quarters, horizontal or vertical halves, or horizontal or vertical thirds. So, unless the terrain, exactly matched the page size (no borders) and met one of those criteria when cut, there is no foreseeable way for them to do the cutting.

Thank you for that fantastic info and I'll do my best to answer your questions below. 1st Q: Would you like us to reiterate our vote in the new pinned topic? A: I am ok with people leaving votes in either the specific topic or the update comments. I am perfectly capable of tallying the votes from two discussions. But, votes should be limited to one discussion or the other as any double voting will not be counted. 2nd Q: About mirrored page layouts & Flippable Terrain. A: I have been thinking about doing this very thing to place variant options (hidden traps anyone?!) that can be flipped easily. I just have to do some testing to make sure it's implemented well, but I do plan on having this in place when the final product is delivered as many home printers and, professional printers, can perform collated printing. I'll work on getting a test pdf up likely next week so that we can all try it out and I'll then make a point of presenting that as an official feature of the terrain. 3rd Q: On paper weights. A: I prefer to use card stock for this type of printed terrain so a weight of at least 80lb - 100lb or 216gsm - 271gsm is going to give you a nice quality less floppy result. If printing at home make sure your printer can handle the higher paper weights 80lb shouldn't be an issue for most printers but the 100lb range can start to be problematic. Also standard printer paper will work pretty well when laminated with thicker laminate material. 4th Q: On cutting laminated paper. A: In a perfect scenario you would have the pieces printed and cut before laminating and then cut the laminated paper just beyond the edge of your cut piece to provide the best seal against any kind of liquid spills. However, that is a lot of extra cutting and probably not something FedEx or a similar service is going to provide. So with that in mind, just know that you may end up with some edge peeling over time as you increase paper thickness and I would not recommend going beyond 100lb. Also, I like to use either a guillotine-style paper cutter or an Exacto knife rather than a pair of scissors to do the actual cutting. Thank you for the great questions and fantastic feedback.