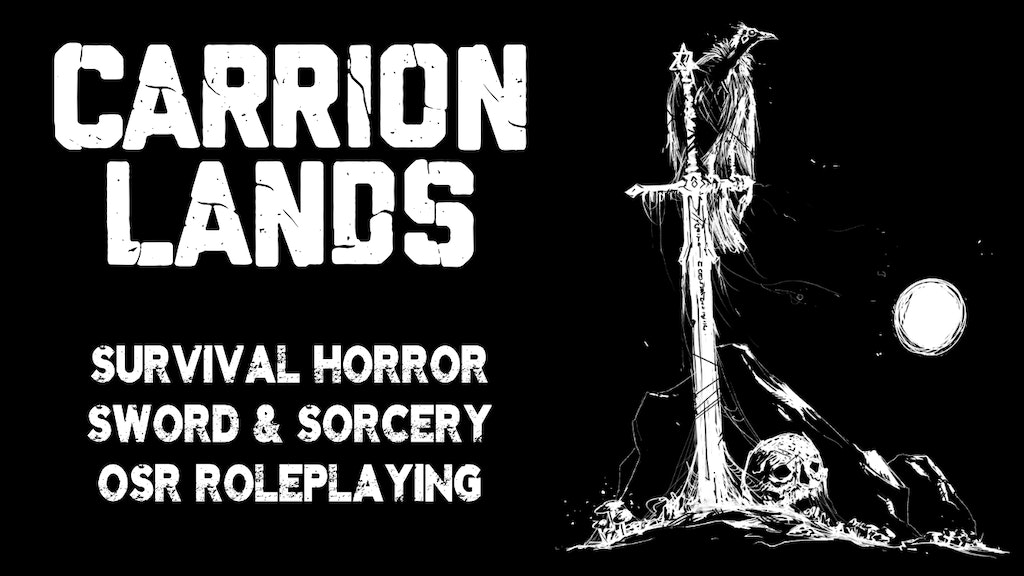 WHAT DO YOU GET?


Please note all images are presented as mock-ups and subject to change. The hardcover will be the same between the stand alone and the slip case! The two mock-ups are presented as we'll be voting on which one to publish near the end of the campaign!

If you back within the first 48 hours, you will receive a digital adventure for Carrion Lands, written by Richard August!

WHAT'S IN THE BOOK?

Complete magick systems, enemies, settlement building rules, as well as the details of the world of The Carrion Lands blend together to take what was released in a public ashcan over the last few years, as well as what we've learned from nearly a decade of game design to create as complete and immersive a game as we can.

All the art is done, as is the trade dress. The final revisions are being made to the text along with a final edit. The game will be going to print as soon as these steps are down.

WHAT ARE THE CARRION LANDS?


Carrion Lands is a tabletop roleplaying game, set in a grim and harsh world inspired by the darkest and cruelest versions of the Sword & Sorcery genre. You’re an Exile, who awoke, confused, naked and alone, doomed in the Carrion Lands. You don’t know how you got there. You don’t remember who you were. All you know is you’re here, with nothing but your wits, muscle and cunning to get you through.


The world of the Carrion Lands is a world of extremes. Blazing, harsh, and dry deserts. Frozen, bitter, and sweeping tundra. Steep and staggering mountains. Fetid, thick, and choking jungles. The enemies are many. Foul, degenerate Beastmen. Cunning and cruel empires of Ophidians. Other Exiles, ready to slay and spill blood for any small gain. Dark sorceries and distant gods.


You own what you take, and you only possess what you can keep. Might makes right in the Carrion Lands. You’ll have to survive on the edge of a blade, perhaps serving a powerful Carrion Lord, perhaps founding your own settlement,in an attempt to survive with like-minded exiles.

But in the end, the crows take everyone...

Carrion Lands will be a deluxe roleplaying game book, lavishly illustrated by Brandish Gilhelm (Runehammer), featuring a hardcover pledge with gilded (or painted) pages, ribbons, and a slipcase! It's the most extravagant book Gallant Knight Games has ever attempted to produce and we want you to join us!

HOW DOES IT PLAY?

Carrion Lands uses a familiar adventure game system, inspired by various D20 OSR games combined to create an intuitive game that allows you to flesh out an amnesia driven character, who must survive this harsh reality while attempting to uncover how they came to be there.

You will have to manage various resources like Food, Water, Blood, as well as your Doom as you traverse these benighted lands. As you continue to adventure forward, you will uncover stories and tales about your past, and these will add to your skills and talents, becoming assets you can use throughout the game to accomplish your goals.

Basic tests are done with a d20 against a difficulty, and resources are managed by dice ratings based on dice size that will fluctuate up and down throughout the game!

You can even found a settlement, attempting to carve out a safe place among a hostile world. But be warned, you will end up in conflict with other Carrion Lords if you are not careful!

As a default, Carrion Lands is a GM and 2-4 player game, though optional tools will help to adjust that. The game does not have a true solo mode.

If you are interested, below are two reviews of the ashcan edition of the game! While the final product will naturally vary, these might give you some insight into Carrion Lands!

Over the last few years, shipping and fulfillment has grown more difficult, and as such there are some important details to know.

Digital Fulfillment will be handled by our friends at DriveThruRPG! We've worked with them for years and are pleased to be continuing to do so.

Based on our experience shipping in the USA, we've worked to establish a new shipping rate on our crowdfunding:

We do our best to keep shipping affordable by doing our own fulfillment, so we can ensure it's done right.

If You're Concerned About Shipping Costs...

We do always put our books in Print-On-Demand on DriveThruRPG, so don't hesitate to just get the PDF and you can get the book later! (Any extra offset print run is sold via our webstore, and you can always get it there, but the high shipping concerns still exist!)


REMEMBER: the above shipping costs are estimates based on current shipping prices. Some changes or fluctuation is possible (and likely)!


Some of our previous TinyD6 crowdfundings (Tiny Frontiers and Tiny Frontiers: Mecha & Monsters) delivered early to backers (4 months in the case of Tiny Frontiers), and Tiny Dungeon 2e was on time! We've hit some hiccups in the last two years by taking on too much, but we've committed to slowing down and delivering great, on time content.


Our writing is done by some of the most talented freelancers in the RPG business!


Carrion Lands has been in development since 2019 and been in play-testing ever since! The art is all in and paid for. The goal of this Crowdfunding is to pay for the print run, making this a truly gorgeous book.