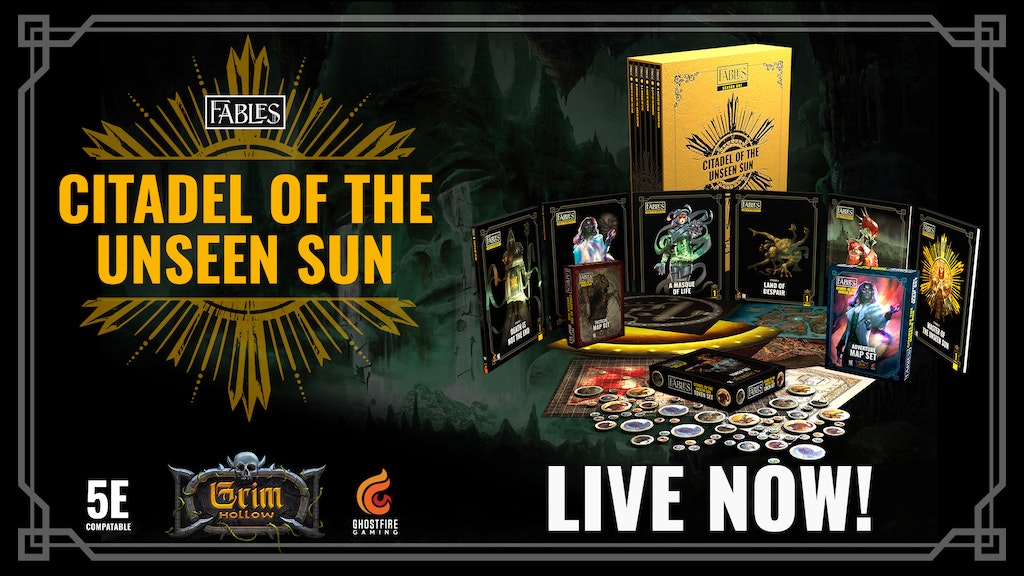 
The first ever Grim Hollow Adventure; Citadel of the Unseen Sun available at long last in a gorgeous hardcover, six-issue physical slip case.

Together these six issues take characters through a dark and twisted adventure path of evil and intrigue. Citadel of the Unseen Sun is set in the ever-gloom of the Ostoyan empire; a realm of eternal night where the sun has vanished from the sky and vampires rule the land as nobles with an iron fist and blood-tinged fangs.

Join the adventure to save the Ostoyan lands today!
So why have we decided to bring Citadel of the Unseen Sun to physical form? It’s simple; this is our way of saying thank you.

Earlier this year, we released our first ever Grim Hollow Adventure: Citadel of the Unseen Sun to our Fables subscription service. This saw us launch the monthly release of this episodic adventure over a course of six months and the constant request we got from our supportive community was asking us to bring the story to life in physical form.


As our thank you to those who have supported Ghostfire Gaming and Grim Hollow, we wanted to do something just for you as well as all the new members of our community. Se we're bringing this first ever Grim Hollow adventure to physical books.

The Citadel of the Unseen Sun six-issue collection of printed hardcover books which comes in Ultra-Premium print, bound together with a gorgeous special slipcase.

These special Citadel of the Unseen Sun products PLUS other Ghostfire Gaming products will be available to all those who back our project.

We are so grateful for the continued support from our community and are thrilled that we’re able to give back to you all with this special offering.

Join us on this adventure and discover with us the secrets of the unseen sun!

Citadel of the Unseen Sun

Etharis is the official world for the Grim Hollow campaign setting. Here, players will be immersed within the dark fantasy genre. From its deep and forbidding forests, where horrible beasts lurk, to the hulking and treacherous mountain ranges where lost legacies lie, the landscape of Etharis is formidable. However, the true monsters of Etharis often dwell in its corrupt and degenerating cities of old, where humanity clings to survival.

Etharis is a place where the gods have perished and left the world to its gloom. In their place, Arch Daemons take delight in a world overrun by shadow and decay. Freed from the deities’ power, they relish opportunities to feed their appetites.

Each realm in Etharis faces its own challenges and darkness. In the forests of the Charneault Kingdom a dense mist drifts between the trees and conceals capricious fey. In the frozen north the Valikan Clans struggle to survive against harsh winters that bring with them terrible monsters. Through Ostoya wafts the decaying scent of death, for it has become a place where vampires rule the ever-present night.

East of the Grey Spine peaks lies a land shrouded in mist and shadow. The hearts of Ostoyan folk are as cold and dour as the land they dwell in. The sun no longer rises in Ostoya, allowing an aristocracy of vampires to take power. While the vampire nobles of the crimson court plot to engulf Etharis in a tide of undead, their servants who are still hidden in the City Below wait in the dark, hungry for the living.

Through Citadel of the Unseen Sun, players will adventure through the Ostoyan Empire to recover an artifact from a long-lost civilization. Enter the bowels of an ancient Necropolis and fight their way back to the surface to recover the sun, stolen from the skies of Ostoya.

Within the pages of each issue of Citadel of the Unseen Sun your characters will find horrifying monsters. Below is but just a sample of the horrors your party will face in their plight to escape the Ostoyan Necropolis.

While the physical slipcase collection of Citadel of the Unseen Sun is the main focus of this BackerKit campaign, that's not all we are producing as part of this epic journey. Below we detail the entire product offering available through this project:

Setting stretch-goals give us the opportunity to build on the already dark and gritty content that awaits in the Citadel of the Unseen Sun campaign offerings, whilst also giving us the chance to give back to our community. As some stretch goals come at a greater expense than others, this means that not all of these can come as a free addition (though we certainly try to where possible). In light of this, any stretch goals that have the text "ADD-ON" next to it, mean they will be available for purchase to all backers, should you choose to add them to your pledge.

As an additional bonus with each of the first five stretch goals unlocked we'll be reducing the price of the Fables digital subscription by $1 per month ongoing from January 1st, 2023. This is our way of providing an extra thank you to everyone who made all the adventures of Fables possible.


Add-ons are a great way to get an extra item or two from a higher pledge, or previous campaign at a discounted rate! All backers will have access to add-ons, all you have to do is back a tier of this campaign to be invited. Once the campaign is complete, we'll reach out to you and ask you to confirm through the BackerKit survey which add-ons you would like to purchase. Shipping costs for add-ons will be determined after the campaign along with the survey; however shipping will be approximately $3-$5 per add-on (depending on the physical size of each item).

Note: we may make more add-ons available in the final survey, so if there's anything you want to see from our store please let us know in the community section!


* Most EU countries will fall into the price ranges detailed on the graphic and we will do our best to ensure the prices remain in these ranges, however in some cases the shipping price may fall outside the ranges detailed in the graphic.
** Please also note that the "Rest of World" price range above does not include countries subject to additional shipping charges due to unusual or extreme remote geographic circumstances. We do our best to provide shipping that is fair for those affected locations however it may exceed the details on the graphic

Please note, shipping will be charged through the Pledge Manager once the crowd funding campaign has ended.

Once you have made your pledge, you will see the following message from Backerkit:


Some of our products are still in the production phase, which means as soon as their available weights and dimensions are available, the shipping price will be entered into your Pledge Manager survey. We design and manufacture our products internationally and will always aim to keep shipping prices as low as possible for our backers.

We ship almost everywhere in the world, however unfortunately due to import laws, customs or postal situations, several countries make it impossible for us to ship to them. In light of this, we are unable to ship to the below countries:

In addition, we cannot ship to any APO, FPO, DPO or PO box addresses. Certain countries will be liable for additional customs charges. These countries include:

More information relating to Shipping is available through our Backerkit FAQs.