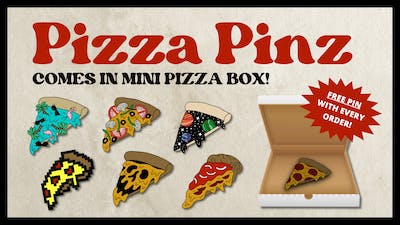 Square-Cut Slice Joins the Menu!
10
4 months ago
by Jason Furie

This cut goes by many names, has many variations, and has many versions of its true origin story. Sicilian, Detroit-Style, St. Louis, Mid-West Style, Party-Cut, Tavern-Style...the list goes on. Sometimes it's spongy and thick, sometimes it's thin and crisp. But one thing is for sure, some folks just prefer the square-cut over the pie-cut. This new slice most resembles the Sicilian style.

There's one more planned Mystery Slice to unlock! I'll reveal the next design if we reach $15K in funding during this campaign. I'm going to keep this one a true mystery though.

BUT I have a few other surprises up my sleeve that may unlock more since we still have 2 weeks to go!

Is there a specific type of slice that hasn't show up yet that you would be SHOCKED if it didn't make the cut? Let me know in the comments! And thank you all so much for reaching this huge milestone.

I would love to see white broccoli pizza!

Ohh, an interesting combo for sure 🥦

this i came here to make this exact comment

Whoa, TWO white broccoli lovers in the house! What are the odds!

I really love this slice!! How about dessert pizza? That would be pretty cool.

Yeah, I've been thinking about some sweet-tooth friendly options. Like ice cream, candy, or whatever else that would gloriously rot our teeth 🍦🍭🍩

Preh-tee...preh-teeeee...dope, Jason. Lovin' what you're slicin' up here. Looking forward to what other reveals you might have up your sleeve. In answer to your question, I'd be in shock and awe if there wasn't a deep-dish version with pepperoni and pineapple. Ha-ha! ...maybe I won't be shocked and awed if doesn't appear...but it IS my personal fave. Regardless, this has been an awfully fun campaign. Keep it up! Ryan "A Hunter's Tale" Claytor www.aHuntersTale.com

Hey Ryan! Yes, it's been very fun running this one, especially on Crowdfunding by BackerKit ✨ Love that custom slice idea. PLUS love your comic "A Hunter's Tale"! Was so happy to get that in the mail. And I can say, I've received like a billion crowdfunding packages over the years, yours was packed up the safest and soundest of them all!

An overwhelming amount of people have been demanding this one. I had to do it!