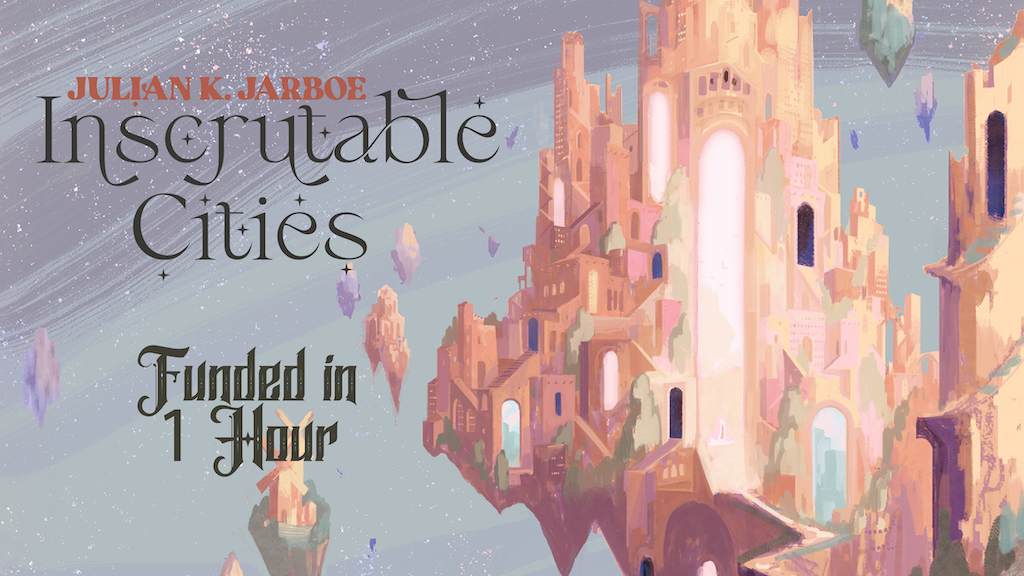 A fabulist solo role-playing game about traveling through an impossible city of your dreams.

"All stories, to be told, must have tellers, and all tellers have a unique perspective which colors their tale. Time here is less a flat circle than a Penrose Staircase."

Inscrutable Cities is a fabulist solo role-playing games about a traveler from a faraway land who has arrived within an impossible city, whose beauty and strangeness you seek to capture in your journal as you explore and travel through this magical metropolis. All you need to play is a journal, a pencil, and a coin to flip at the fork in the road.


Inscrutable Cities is a love letter to the 1972 masterpiece Invisible Cities by Italo Calvino, and provides for the player the mechanisms needed to move through one of his titular invisible cities, to explore a world unbounded by time and space, to move from a mundane mode of storytelling into a fabulist one. Written by Julian K Jarboe, author of Lambda Award-winning short story collection Everyone on the Moon is Essential Personnel, and published by Possum Creek Games, the team behind Wanderhome and Yazeba's Bed & Breakfast, Inscrutable Cities is a must-have for wanderers, storytellers, and the dreamers among us.

Who Are You, Traveler?

Inscrutable Cities is a ten thousand word solo role-playing game, featuring a beautiful cityscape cover by Serena Malyon and full color illustrations by Evangeline Gallagher. It will be published as a half-letter size softcover book through Mixam. This project with Backerkit will be to cover the costs of the print run and ensure everyone on the team can be properly compensated for the work they're doing. We have a number of tiers, featuring art from the game and providing additional tools to use while playing.

This crowdfunding project is composed of several tiers:

Ah, But Who Are You, Really?

Julian K. Jarboe is a writer and artist from Massachusetts. They are the author of the collection Everyone on the Moon is Essential Personnel (2020, Lethe Press). More about their work can be found at juliankjarboe.com.

Dominique Dickey is a writer, editor, and cultural consultant working in RPGs and fiction. In addition to creating TRIAL, a narrative courtroom tabletop role-playing game about race in the criminal justice system, and co-creating Tomorrow on Revelation III, a tabletop role-playing game about surviving and building community on a hyper-capitalist space station, Dominique has also written for Thirsty Sword Lesbians, Sea of Legends, and Monte Cook Games.

Ruby Lavin is the artistic director of Possum Creek Games and the artistic mind behind everything Possum Creek Games does, including Wanderhome, Sleepaway, Wickedness, and more — along with layout design for other successful Kickstarter-funded projects like Strong Female Protagonist and Field Guide to Memory. She likes texture, critical theory, fantasy, and weird plants.

Evangeline Gallagher is an award-winning illustrator based in Baltimore, Maryland. When they aren't drawing you can find them hanging out with their dog or playing tabletop games (but they're probably drawing). Their clients include the New York Times, Penguin Random House, Andrews McMeel Publishing and more.

Serena Malyon is a Canadian illustrator who works in watercolour, acryla gouache and Photoshop. She grew up in a household of artists and spent her early days drawing the knights and maidens from her books. Since graduating from the Alberta College of Art and Design in 2012, she has built her career on her love of fantasy, adventure and storytelling. Her illustrations blend whimsical stylization with contemporary compositions and colours to create a unique look. Her work has appeared in a variety of media, from young adult and fantasy book covers and interior illustrations to magazines, maps, picture books, textbooks, graphic novels, tabletop games and video games.

Jay Dragon is the editorial director of Possum Creek Games, and author of Wanderhome and Sleepaway (among others). This is Jay's sixth Kickstarter project involvement, working on games about community, liminality, trauma, and the magic behind the mundane. Jay also has a weird thing for Excel spreadsheets, which makes Jay oddly well-suited for the whole project manager thing.

End At The Beginning

This is Possum Creek's 7th crowdfunding project, and it's a modest affair. We're not doing any stretch goals or huge initiatives — we just want to get this book into people's hands. However, because this is our 7th crowdfunding project, we know our own limitations and pacing. Possum Creek Games is a small company run by two disabled people, and we're also in the midst of developing a much larger project (Yazeba's Bed & Breakfast). We've designed the timeline for Inscrutable Cities to neatly avoid scraping against Yazeba's, but sometimes delays or project issues will force us to adjust our schedule.

With that said, the book is done! So any delays will come from the actual manufacturing process itself, not from our own creative work.

The tentative timeline right now is to get the final edits and touchups on the project by February 2023 (giving us time for the holidays), and to print the project in May or June 2023, distributing in June or July. We'll keep you informed and updated as the project continues if any delays manifest.

Thanks for supporting us as we try out a new platform with a new project, and we're excited for what the future holds.