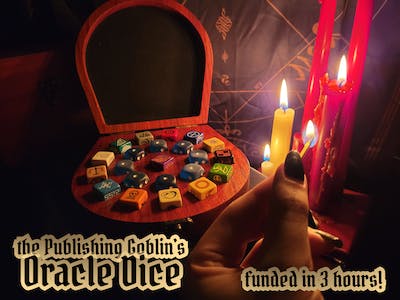 The Dice in Hand! So! Many! Pictures!
10
about 2 months ago
by Publishing Goblin, LLC
Okay, I just threw a little fit honestly. I wrote this massive long update, all these pictures. It was an hour of writing. I scrolled down to hit Save, and it took me to a login screen. I knew immediately it just deleted everything. I don't know why the save button took me to login, or what logged me out. I'm just so so so frustrated, and re-writing this whole thing. It will probably be missing some of the thoughtful details I thought about, blah. So now at the end of my work day I'm re-writing everything I can think of. Agh. Bleh. Screm.

The Dice are In


Okay, so I have the dice in hand. The long and short is this: They look amazing. They're not all correct though. Of the 22 dice, only 7 got my total okay, both in their plastic and stone form. The remaining 15 have various issues, mostly color of die or color of ink, but one had a symbol flipped/mirrored for reasons I don't know.

I don't have the new wooden boxes in hand, but I do have pictures from the manufacturer I'll share for now! If you are excited about anything you see here, and realize you didn't get it-- or you want to adjust your pledge in any way, such as adding, removing, or choosing new options for the wooden box (new engraving for the top), you MUST reach out to backerkit support on your survey to have them adjust it. I wish I could adjust or help you with this, but I can't!

I'm locking current unlocked orders and charging those (mostly pre-orders, some people who did surveys late) next week. So get your stuff in now! Addresses will remain unlocked until we are close enough to charge shipping costs.

Please bear in mind that the pictures don't capture everything completely the way they look in real life, and anything that was actually hard to read in real life I am adjusting with the manufacturer! : )

Additionally, only two dice, the red Obstacles Die and the 12-sided Chaos Die were made with finalized molds. The rest were all lazer etched. As we move from lazer etching to the final molds, a dozen or so dice are having small changes made to their symbols to simplify things. In almost every case, these changes were so small they're irrelevant. I almost couldn't tell on some what the changes even were. However, for the Mariner's Die and the Metamorphosis Die, some very big simplifications are being done. Simply put, I like the original designs better. However, those two were always way more detailed than everything else, so these changes might be for the best in making them match the rest of the set. (You can't see the simplification here, these dice were all lazer etched.) They also will make them actually legible on the stone dice, which right now are hard to parse with the detailed design on the textured stone surface. We are talking about potentially engraving these two dice for the whole run, I'll let you know how that shakes out.


A Closer Look at What's Right, and What's Wrong


Made it to the bottom? Awesome, and welcome. Let's have a better look at the dice as a whole. This picture below features the dice set in its entirety. The original dice, the new plastic version, then the stone version. The changes I sent to New Titan to give to the dice manufacturer is below the photo, so you can see all the changes that are happening. Please remember this is a photo and in photos not everything comes out right, colors are different, some things are hard to read that aren't in real life. So trust me on the changes! : )
I think it's true that some dice are losing saturation. Some of that I'm changing, some of that I like. Also this is a different manufacturer with different clearances, so yes, all the symbols are generally shrinking in from the edges a little. In comparison directly with the first edition it is a little blah, but on their own I don't even notice.
If I do a third edition sometime down the line, I'd consider going back with the original edition's manufacturer and raising the price on the set to make that work out. But I promise, the set on its own doesn't read poorly or look less-than in person. It looks so fantastic, the mistakes aside.

And here are all the notes I'm sending back (They cover the plastic die, then the stone die, then suggested changes from laser etching to molds). I figure that even if I say to trust me on what's changing, some people will still worry about specific things above:

And a note on the stone dice... The plastic dice are molded, they are exact. Perfect. The stone dice are carved, they are not exact. Some of the stone dice were snug in the wooden box holes. Some of them had issues where they didn't fit in the holes at all unless I turned it to a different face, because the stone isn't perfectly square. None of them were WAY big or anything, they were just slightly too large when turned certain ways. The only issue this brings is that if you get the symbol engraved top for your wooden box, and then it turns out that stone die can't fit in the right way to get that face upright... I'm asking if we can ensure the dice will be as close to size as possible, but it may just be a trait of the stone dice. Bear that in mind, their more organic form just isn't absolutely exact, and can lead to snug fits.

And that's everything! Fulfillment...

We're about 2 weeks behind on our planned schedule, so I wouldn't be surprised if we end up shipping into and through March, rather than February, but I think I basically said Feb/March last time. New Titan thinks we'll be good for February but I know better than to trust the state of the world right now. I'll of course let you all know as things change, if they change, etc.

Right now I'm exhausted. All the final fixes and details for all three projects have gotten bigger than they were, and while I should have everything finished up shortly, I'm tired. There's a fourth overlapping project in the background I wasn't supposed to have a hand in, but something got messed up horribly back in June or July and I've been working on that simultaneously ever since. As a result, I'm taking a break once my work on these three overlapping projects is done by the end of next week, and just focusing on making sure the Alleyway Oracles are ready to go in mid April, when all 3 of the current projects are finished and in people's hands. And after that, I'm likely not doing any other projects in 2023. Okay, maybe one in October.

Year of the Goblin will get prepped in full for 2024. No 'small detail that becomes a big detail' will be left to be done for later. The only projects that will go live will be projects fully ready to go, every print file finished and okay'd with printers/manufacturers, etc. If 12 projects aren't ready for that, then only the ones ready will run. Period. The little details I have to chase down at the end of each project are never as little as they seem!

I'll continue to pass on news as I get it. Thank you,