Late pledges are now open if you missed the campaign!
Pledge manager for backers are also open. 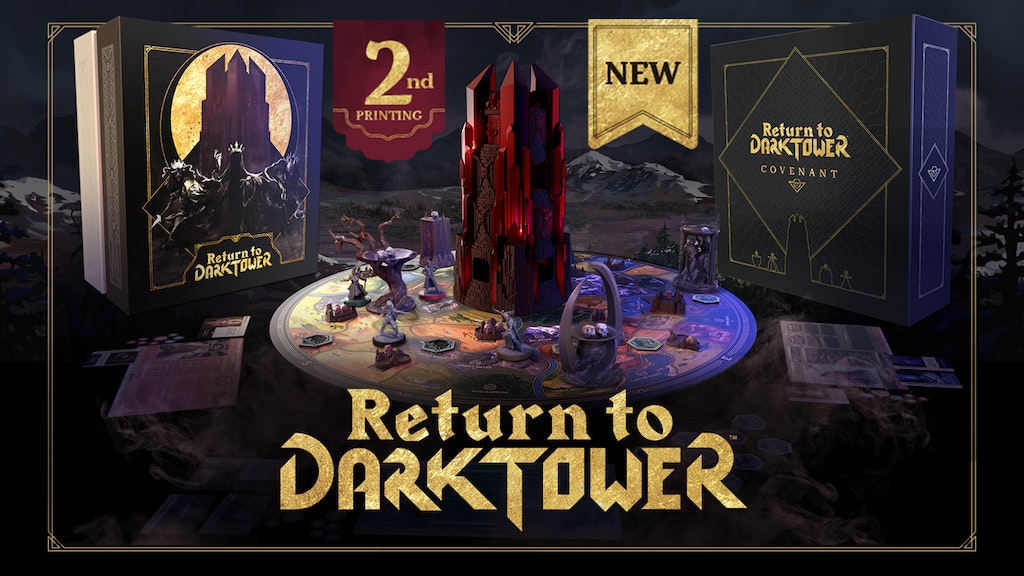 THE TOWER IS BACK


Years in the making, with a massive team of talented designers, artists, and engineers. When we released our modern new vision of the classic 1982 game of high adventure and electronic wizardry, we didn't know what to expect. But the response was as epic as the game itself. One of the largest board game campaigns, rave reviews, and thousands of new fans.

Now, the Tower is back and it's badder than ever! If you missed out the first time around, you can get the base game and all the extras. If you're already a fan, you can pick up the all-new expansion: Covenant. Either way, it's time to take on the Tower!

Created by a world-class team of designers and engineers, led by Tim Burrell-Saward, an expert in technology-augmented games, the Tower itself is a game component without equal. From its very foundation, it's been devised to play an integral role in the game. Using a collection of magical-yet-reliable technologies, it generates game moments that simply wouldn't be possible without it. The Tower literally and figuratively dominates the table, drawing upon all of these powers to foil you. You will grow to curse its name.


A powerful adversary occupies the titular Tower, spreading fear and chaos across the land. A helpful companion has devised a plan to drive the adversary from the Tower so you can face them in battle. In the meantime, you'll face off against a host of fiendish foes. Literally thousands of possible setups to explore!

You are a hero, battling foes, cleansing skulls, and completing quests. Along the way, you'll gather important resources and unlock your virtues to grow in power.

The companion app generates events and quests and manages the flow of battle to keep things dynamic, all while keeping your focus on the Tower and the table.

Complete the main goal and defeat the adversary before you gain your third corruption, run out of skulls, or run out of time and lose the game!


For a full rules explanation, you can watch this video from Rodney Smith of "Watch It Played".


This new Covenant expansion offers a whole new challenge to solve and four new heroes to use in this expansion or in the base game! Can you make offerings to the Gods of Light before wastelands consume the four Kingdoms? Can you leverage these monuments to save the day? Can you survive against the inexorable assault of doomskulls? The challenge awaits.


Four new heroes arrive from the hinterlands to join the fray. The Reverent Astromancer prepares spells with a variety of effects. The Devious Swindler embraces the power of luck.


The Relentless Warden locks in on a single target and wipes them out. The Undaunted Aegis absorbs the burden of corruption to gain strength.

These new heroes can be played in all modes and mixed in with the existing heroes for dozens of new combinations and combos to explore.

Demonstrate your devotion and raise the monuments to win the day, or ignore them at your peril!


Monuments are a big addition to the game in every sense of the word.

At the start of the game, one building of each type is removed from play (each from a different kingdom). In their places are foundations to build monuments. Each monument requires a different type of risk or sacrifice to place an offering on its foundation. A show of faith if you will. When a foundation has three offerings, you can take the new Build heroic action to place the monument on the board. These structures are represented by impressive figures, rivaling the legendary titan. Importantly, they can be used as buildings now with powerful new Reinforce effects, while also generating effects in the app to help you turn the tide.

Covenant sees the introduction of a devilish new kind of skull, as dark as the Tower itself. Kept in a separate supply, the app will direct you when to drop them in the Tower. They work just like regular skulls with one big exception: Once they are placed on a building, they can never be cleansed, moved, or otherwise removed. They will haunt you for the rest of the game ... or at least until that building is destroyed.

The Tower's corrupting reach emanates from the Tower, laying waste to the lands. Using a dynamic algorithm, the app will direct you to place wasteland tokens on spaces across the board. These tokens negate terrain effects (good bye champion virtue!) and prevent you from leaving that space for the rest of the turn. As the board fills up with tokens, navigating can become a challenge (hello, Kamaria's Carpet!). If you build a monument, wastelands will no longer spawn in that kingdom, so make those offerings.


Twenty new treasures arrive in the market. These include a new kind of treasure, wands, that gain and use charge tokens to power their effects.

Twelve new corruptions vex the heroes. The new effects are more hindering than the base game corruptions, providing another way to adjust your overall game difficulty. Add as many as you like to the pool, or use them all for a particularly challenging test.

Return to Dark Tower has been widely lauded for its production values, so there are no major changes with the second printing.


There are no changes to the physical components for the 2nd printing of the base game. We have revised the rulebook with minor corrections and clarifications. There is only one substantive rule change: When a fourth skull would be added to a building, all four skulls are removed from the game instead of returning the fourth skull to the supply. (Very few games were ending with players running out of skulls in the supply, and this change cleans up the general rule.) The revised rulebook will be available in pdf format for downloading, and the key changes to the rules will be noted in the Covenant rulebook. The only remaining change is to the pack out of the components to prevent the punchboard impression from showing up on the rulebook cover as happened in the first printing.


The Alliances expansion introduces powerful guilds you need to sway to your side, using influence, a resource shared by all the players. It also includes power skulls that drain resources when you enter their spaces, 2 new heroes, 12 guild companions, and 20 new treasures. There are no changes to the Alliances expansion for the 2nd printing.

The Dark Horde pack provides stunning 3D designs of the adversaries, foes, and quest markers to replace the tokens. The only change to the physical components in the 2nd printing comes with the Dark Horde miniatures. These will now be cast in a lighter plastic, matching the hero miniatures from the base game, which most folks felt worked better with the ink wash.

Choose your pledge level below to back now. Each image directly links to that pledge. If you want to add additional items, choose the best fit for your pledge level, and you can add them later in the pledge manager after the campaign is over. For more information on how to back, check out the FAQ link in the banner menu at the top of the page. We expect fulfillment to commence no later than July of 2023.

We will again be offering the neoprene board, Coffers plastic tokens, and custom card sleeves for folks who want to bling out their game. You can also use add-ons to get additional copies of the base game, Dark Horde, and Alliances. You can increase the amount of your pledge by the amount of the add-ons you wish to add in the pledge confirmation screen if you want to account for the funds now, or you can wait to add them and be charged later in the pledge manager after the campaign is over. This campaign is your best chance to get these accessories to take your experience to the next level. They will not be available in distribution afterwards.

A new crowdfunding platform means trying out new things. Because this is a 2nd printing, which already includes the stretch goals unlocked from the initial campaign, we are using BackerKit's achievement system to reward progress in the campaign with a more in-depth look at the content in Covenant. This is a new system for us, so we'll continue to tweak things as we go to make things fun and exciting for backers. Thanks for backing!

See what others have been saying about the game!

We will charge shipping in the pledge manager, after the campaign is over. We are once again subsidizing the charges to keep things as reasonable as we can given the current state of freight and logistics. The chart below indicates the amount you will be charged for shipping (and VAT, as indicated) based on your region. Additional shipping charges will apply for additional copies and add-ons. For the EU and UK, additional VAT will also be charged for additional copies and add-ons.


Crowdfunding campaigns are notorious for fulfilling later than promised. Our last campaign was no exception, but we feel like a global pandemic was a pretty good excuse. That said, we are building in a very big buffer so we can avoid that in this campaign. We expect fulfillment to commence no later than July of 2023.

Help us get the word out that this campaign is live! This game wouldn't exist without your support and every backer counts.