👑 Find this collection of Monsters, Maps, Magic Items on our website! 👑 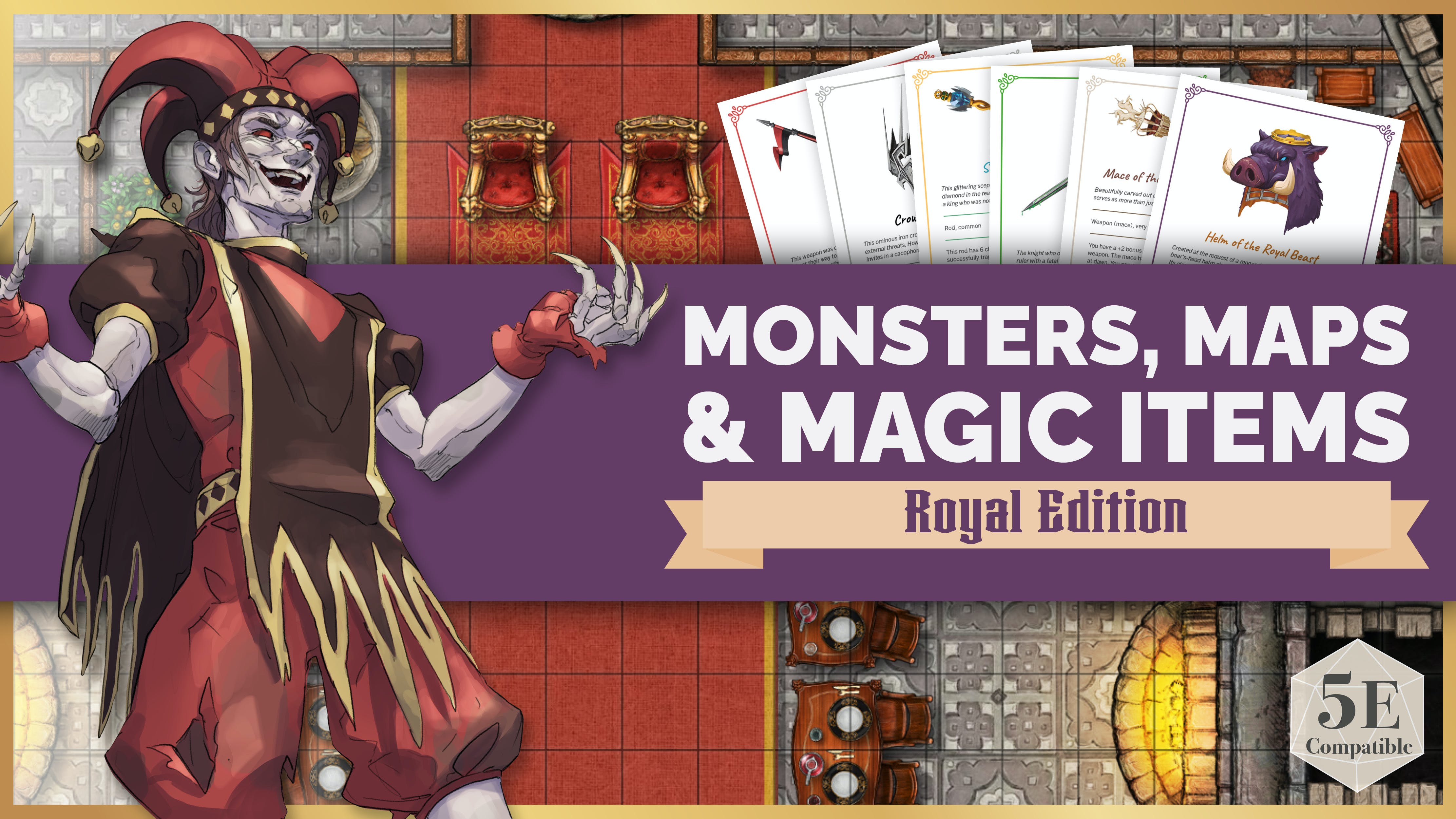 A digital collection of regal items, enemies and VTT-compatible maps for your 5E role-playing games.

Exploring a grand palace? Seeking the favour of a benevolent monarch? Fancy yourself descended from a royal bloodline?

Roll & Play Press are proud to present Monsters, Maps & Magic Items: Royal Edition – an inspiring, digital collection of regal items, enemies and VTT-compatible maps for your 5E role-playing games. This selection of beautifully illustrated products can be used individually to supplement your existing fantasy campaign, or combined to build a majestic one-shot or adventure.

This project comes from the ENNIE Award-winning team behind successful crowdfunding projects The Game Master’s Fantasy Toolkit and The Fantasy Character Kit.


With beautiful illustrations, descriptive lore and full rules for 5E, these three monsters are the perfect foes for any royal adventure. Each monster also features an illustrated token for your virtual tabletop game.


Face a squadron of fiercely loyal battle swan guards, ready to defend palace grounds in a flurry of feathers and fury.


Behold this majestic statue, enchanted to defend its sovereign without question. This mighty marble guardian makes for an epic encounter.


Set the scene for a palace showdown with three virtual battle maps. These locations could become home to your new monsters, or used for battles whenever your party visit a castle or other royal residence. The maps are 25x25 square and will be delivered as high-res jpegs (gridded and non-gridded) for VTT games.

Visit the royal rulers of your city and take part in a glorious feast. Stick around after dinner, as there's sure to be some exciting entertainment.


Take a stroll through the beautiful palace gardens, but beware of straying too close to the spooky royal mausoleum.


Delve into dark, dank spaces where only prisoners and a few unlucky servants dwell. At least, you hope they are the only souls who live in these dungeons…


Fill your throne room and reward your party with a collection of royal treasures, ranging from a unicorn-topped mace to a gleaming, bejewelled orb. These ten ceremonial items aren’t just for show, their intriguing magical abilities will also enrich combat and other role-playing moments. Collated in one PDF, all ten items feature stats compatible with 5E to help you easily integrate them into your game and are brought to life with stunning rendered illustrations.

Are you willing to brave the cold for even more monsters, maps and magic items? Upgrade your pledge to The Complete Bundle and receive THREE more monsters, THREE more VTT maps and TWELVE more magic items, all with an enchanting winter theme! This bundle brings together some of our favourite digital rewards from a previous campaign.

Prepare to battle The Great Fir Drake, outwit a Snow Sphinx and tackle a horde of pesky Pudding Gremlins. Defeat these festive foes before they ruin the winter festivities.

Explore a Cave Grotto, Festive Tavern and Frozen Lake Market and create the perfect seasonal scene for a cool combat session. The maps are 25x25 square and will be delivered as high-res jpegs (gridded and non-gridded) for VTT games.


Whether your players are searching in dark caves, mysterious locked chests, or in a stocking by the fireplace, give them the gift of these magic items and weapons, inspired by the ‘12 Days of Christmas’ song.

Celebrating a winter festival? Exploring frozen wastes or snowy mountains? Investigating a chilling curse that has encased the kingdom in ice?

Monsters, Maps & Magic Items: Winter Edition offers a seasonal, digital collection of wintery items, enemies and VTT-compatible maps for your 5E role-playing games. These inspiring resources can be used individually whenever your existing fantasy campaign explores an icy location, or combined to build special holiday one-shots that your family and friends will enjoy year after year. Pledging for The Complete Bundle gives you access to all Winter rewards for only £4 extra, saving you £20 overall!

If you want to get your hands on some of the awesome add-ons from our previous crowdfunding campaigns, this is your chance! Pledging for The Castle Vault will give you access to an extraordinary collection of SEVEN playable races, TEN character cards and THREE audio tracks to use during your games, plus printable notebook sheets for game masters and players alike. This pledge level offers savings of over 50% and includes some products ONLY available to crowdfunding supporters.

Each race is fully fleshed-out in an 8-page PDF booklet including background lore, culture and lifestyle, traits, name suggestions, features and in-game abilities. Our playable races are created with a balanced approach, so they can slip seamlessly into your games alongside existing races! From left to right: Blackhorn, Borsukk, Hederan, Oozling, Groucher, Tarandus and Snowborn.

Fill your games with a selection of wonderfully unique and detailed NPCs with these handy character cards. Or, hand these cards out to the players at your table and supply them with an interesting character to embody at the tabletop – including a suggested class, backstory, personality and alignment!

Set the scene with three specially commissioned pieces of frosty background music and ambient noise, entitled “Winter Ambience”, “Jolly Festival” and “Christmas Combat”. Check out the samples of each track below:

Keep your session notes, maps, dungeons and characters organised with printable pages from The Game Master’s Notebook and The Player’s Notebook. With hex and square grids, an integrated 5E character sheet, spell slot trackers, equipment lists, ammo trackers and more, you and your players will be prepared for wherever your next game takes you!

The crown jewels of this campaign. This tier includes everything from The Castle Vault, as well as The Game Master’s Fantasy Toolkit and The Fantasy Character Kit, almost 300 pages of award-winning random tables. This pledge level offers a 45% discount and includes some products ONLY available to crowdfunding supporters.

Whether you’re a beginner game master or have been running sessions for decades, The Game Master’s Fantasy Toolkit is a handy digital companion for anyone planning campaigns and improvising at the tabletop. The random tables within explore campaign ideas, organisation names, town features, tavern generators, random encounters for every environment, festivals, blessings, diseases, and so much more.

By taking ideas and inspiration from the breadth of random tables within The Fantasy Character Kit, your campaigns will soon be full of memorable characters and unforgettable role-playing moments that will bring a totally new dimension to your games! Each of the fourteen chapters covers a different RPG class, from bard stories to wizards spellbooks, or ki manifestations to otherworldly patrons, this digital book has everything a game master or player needs to create incredible characters.

All rewards are digital-only and will be fulfilled at the end of June 2022, shortly after the campaign closes!


Our previous digital-only crowdfunding campaign, The Game Master’s Christmas Essentials, ran in December 2021 and went from project launch to fulfilment in just 14 days! All products available as part of this campaign are already completed, so we’re confident we’ll be able to deliver by late June.

When filling out your pledge manager (after the campaign has finished), you will also have access to our Add-On Store. If you would like to, you will be able to purchase additional individual items at this stage, which will be included in your pledge. These include digital items from this campaign as well as digital versions of our previous projects, and will be charged at the values below:

This crowdfunding campaign will run for a limited window!

Everything has been planned in advance to enable us to deliver rewards as soon as possible after the campaign closes, at the end of June 2022. This digital-only project will be fulfilled via our website, www.rollandplaypress.com, with the help of our friends at BackerKit.


If you want immediate access to your rewards as soon as they are available, please ensure you complete your BackerKit pledge manager on the day they are sent out (stay tuned to our project updates for more information when the time comes) and you have rectified any issues with your chosen payment method. After this point, you will likely have to wait 1-3 working days between completing your pledge manager and receiving your rewards as we process your pledge.

All items have been completed, so there are unlikely to be any production delays. Fulfilling digitally also means this project should not be impacted by ongoing shipping disruption. If there are any unexpected delays, we will always update backers regarding changes to the planned timeline. We are proud to have delivered our previous projects on schedule.

Christina Weinman created the wonderful artworks that bring our Royal Monsters to life. She also illustrated our Winter Monsters and Magic Items. Check out more of Christina's work on Instagram here.

If you have any questions about this project, please email us at hello@rollandplaypress.com or drop us a comment in one of the open discussions in the Community tab.

Want to know more about Roll & Play Press products? Check out the videos below!