If you're a returning backer who has backed a StarKid project in the past, we want to say thanks with bonus rewards of a 🎵 Song Download and exclusive 📍Lapel Pin! 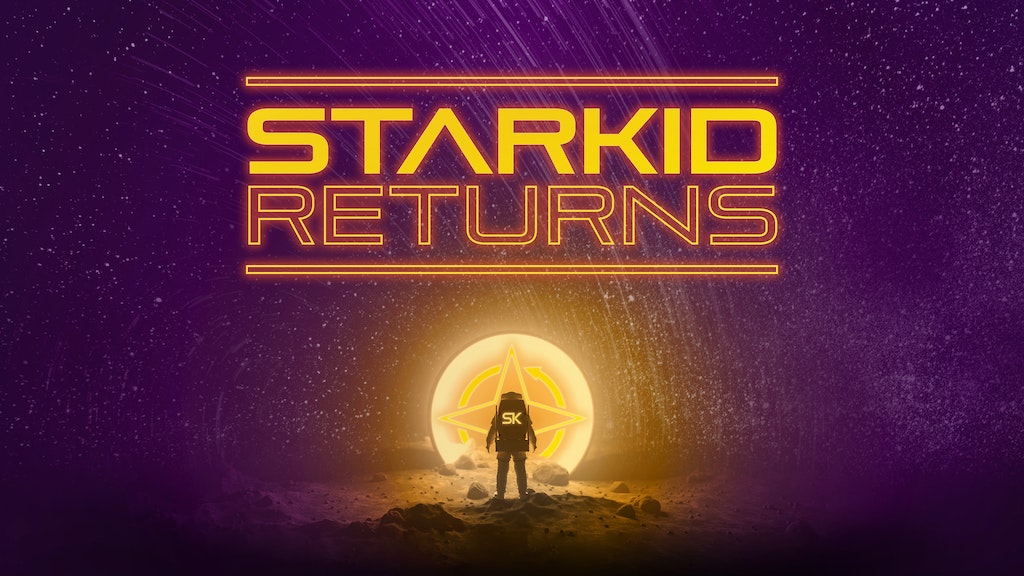 After a few years in cryosleep, Team StarKid is back and ready to kick it into warp speed! 🚀 We're launching a huge slate of new projects including a 🧪 creative incubator, a 🪩 holiday concert tour, and a new 🪓 Hatchetfield musical!

This is a Theater project.

After a few years in cryosleep, 💫 Team StarKid is back and ready to kick it into warp speed! 🚀 We're launching a huge slate of THREE new projects that we think you'll be over the moon about! 🌝
The last time we did anything like this was in 2019, our biggest year ever when we produced 🌟 StarKid Homecoming and 🎁 Black Friday. But this time around, we've got even more in store! 😱


We're super excited about making these new projects since they feature the 🎵 music, 😂 comedy, and 💜 heart you've come to love from all of us here at StarKid! 💛 But we can't do it without you! We hope you'll join us and become a backer to make this next chapter of StarKid bigger and better than ever!

This holiday season, you are cordially invited to rock out at the StarKid Jangle Ball!! After a decade-long hiatus, we’re hitting the road again! But this year, we’ve been naughty and nice, so we’re delivering an evening of iconic StarKid villain songs AND a concert rendition of A VHS Christmas Carol that you won’t wanna miss!

Nerdy Prudes Must Die is a teen-slasher comedy about a group of geeks and their ghostly tormentor from the creators of The Guy Who Didn't Like Musicals and Black Friday. When the biggest losers at Hatchetfield High unwittingly complete an ancient, evil ritual, they unleash an all- powerful, angry spirit with a grudge against nerds. That’s when Stephanie Lauter, Grace Chasity, and a cast of social rejects must fight to save themselves and nerdy prudes everywhere. But can any of them survive the fury of a bully from beyond the grave?

We are Team StarKid and we believe in science. Which is why we are launching SK Labs, a place where we can probe the mysteries of our universe through new experimental projects that push the boundaries of creativity and innovation. SK Labs will be a workshop and creative incubator for new ideas, new collaborators, and new formats, the likes of which you’ve never seen before! Because we’re mad! MAD I tell you!!

Space Baby follows the intergalactic adventures of a timeless, telepathic tot on a quest to discover the origins of existence itself. Each anthology episode of Space Baby will feature the work of a diverse array of artists, from writers and directors, to animators and composers, all forming the programming that our titular Intergalactic Infant will consume in its endless quest to unlock the mysteries of the universe. It’s Sesame Street meets David Lynch. Yeah. It’s gonna get weird.
📋 Produced & 🎨 Created by:
Jaime Lyn Beatty & Curt Mega

A new one-act comedy play reading
Every morning, Trent clocks in at queer.io, a tech startup where feeds training data into a machine learning algorithm, works through lunch, and is the last one in the office before he clocks out and goes home. Day in and day out, Trent never seems to be able to make a dent in the data or get ahead at work despite sacrificing his personal life to do so. But that all changes when the algorithm he’s been teaching seems to take on a life of its own. Sissy is an absurdist comedy about a modern gay Sisyphus, our increasingly fragmented views of pop culture, and our outlandish expectations that AI will be the solution to very human problems.
✏️ Written by: Corey Lubowich
📣 Directed by Corey Dorris
📋 Produced by Tammy Babich

🎙THIS TITLE IS PERMANENT!

A new podcast from Lauren Lopez that will definitely be figured out by the time it airs! (She was told two very different timelines for when she had to have this all figured out, but THAT'S OK WE'LL DO IT LIVE!) Each episode will definitely feature a very special guest and the following classic segments:
🗣 Hosted & Created by: Lauren Lopez

We can't make our big return without you! Which is why we're offering some exclusive and totally awesome rewards. You'll get the five new projects to enjoy PLUS cool swag. It's a win-win!


Want some additional StarKid swag? Add-on to your pledge with these rewards a la carte!


Click any button below to automatically increase your pledge amount by the add-on's price. Then click "Confirm Your Pledge" and you're all set! Lather, rinse, repeat as necessary.

After the campaign ends, you'll receive a BackerKit survey where you'll be specify exactly which add-ons you want with your add-on credit, and where to ship any physical rewards.

If you've backed one of our crowdfunding campaigns before, we want to say "Thank you!" with some bonus rewards. Back at any time during the campaign and we'll send you the bonus 🎵 song download of "StarKid's Back" from our campaign video! AND we'll also offer you a bonus📍 lapel pin!


Never backed a StarKid campaign before? Now's the time! We want to extend these bonus rewards to you as well. Back in the first 48 hours of the #StarKidReturns campaign and we'll welcome you into the SK Backer Fam by sending you the bonus 🎵 song download of "StarKid's Back" from our campaign video! AND we'll also offer you the bonus📍 lapel pin!

Backers at tiers that already require shipping ($50+) will have the pin added to their reward survey automatically!

Backers at tiers that don't require shipping (<$50) will have the option of adding the pin to their survey after the campaign.

This is the approximate timeline of what we're aiming for! But of course, all dates are subject to change as things move forward.


September 2022  – 🗓️ Campaign Starts
October  2022 –  🗓️ Campaign Ends
December  2022 –  🪩 Jangle Ball Tour Live Shows (Dates & Cities TBA)
December  2022 –  Reward Surveys Sent Out
February  2023 –  🤓 Nerdy Prudes Must Die Live Shows
March 2023 – 📦 Lock Shipping Addresses & Charge Shipping Costs
Spring  2023 –  🧪 SK Labs Project Premieres (🛸Space Baby, 🎀Sissy, 🎙This Title Is Permanent!)
Late Spring 2023 – 🎁 Approximate Reward Delivery
In the past, when you've backed for one of our projects, your credit card was charged for the pledge tier you selected and then shipping on top of that when the campaign ended. This time around, after the campaign ends you will be charged the amount you pledged but then you'll be charged for shipping later through your BackerKit survey. It’ll be closer to when rewards ship to ensure that it's the right amount for the rewards/add-ons you've selected!

For reference, approximate shipping costs for the various pledge tiers and add-ons are below.


*If backers at tiers below $50 who after the campaign qualify for and add the bonus pin reward to reward survey will incur shipping fees equivalent to the $50 tier.


Check out our FAQ if you have any questions about our projects, how this works,  BackerKit, or crowdfunding in general!

Submit a question to us if you can't find the answer on our page! You can do so in the 🔥 Burning Questions discussion thread in the Community tab.

StarKid Productions* is a comedic musical theatre company that lives on the internet, producing hilarious parodies (A Very Potter Musical, Holy Musical B@man!, Twisted), spooky musical-comedies (The Guy Who Didn’t Like Musicals, Black Friday), and meme-worthy moments (Firebringer) since 2009, when our show A Very Potter Musical went viral on YouTube.


“The future of musical theater”
— The Chicago Tribune

In the 13 years since, StarKid has produced 11 full length musicals. (including parodies of Disney, Star Wars, Batman, and The Oregon Trail), devised nightmarish live readings and digital episodes, reimagined a Christmas favorite with a retro, musical twist, gone on national concert tours, had 12 albums on Billboard’s Top Cast Album Chart, created two sketch shows with The Second City in Chicago, and performed at conventions, meeting fans all over the world.

— Entertainment Weekly
Individually, members of StarKid have gone on to star in Broadway shows like Book of Mormon and Sunset Boulevard, been on TV in Glee, American Crime Story, and The Flash, written their own books, plays, music, films, and more!

You might also recognize our work in these popular reaction gifs and memes:

*The name "StarKid comes from this line in A Very Potter Musical!