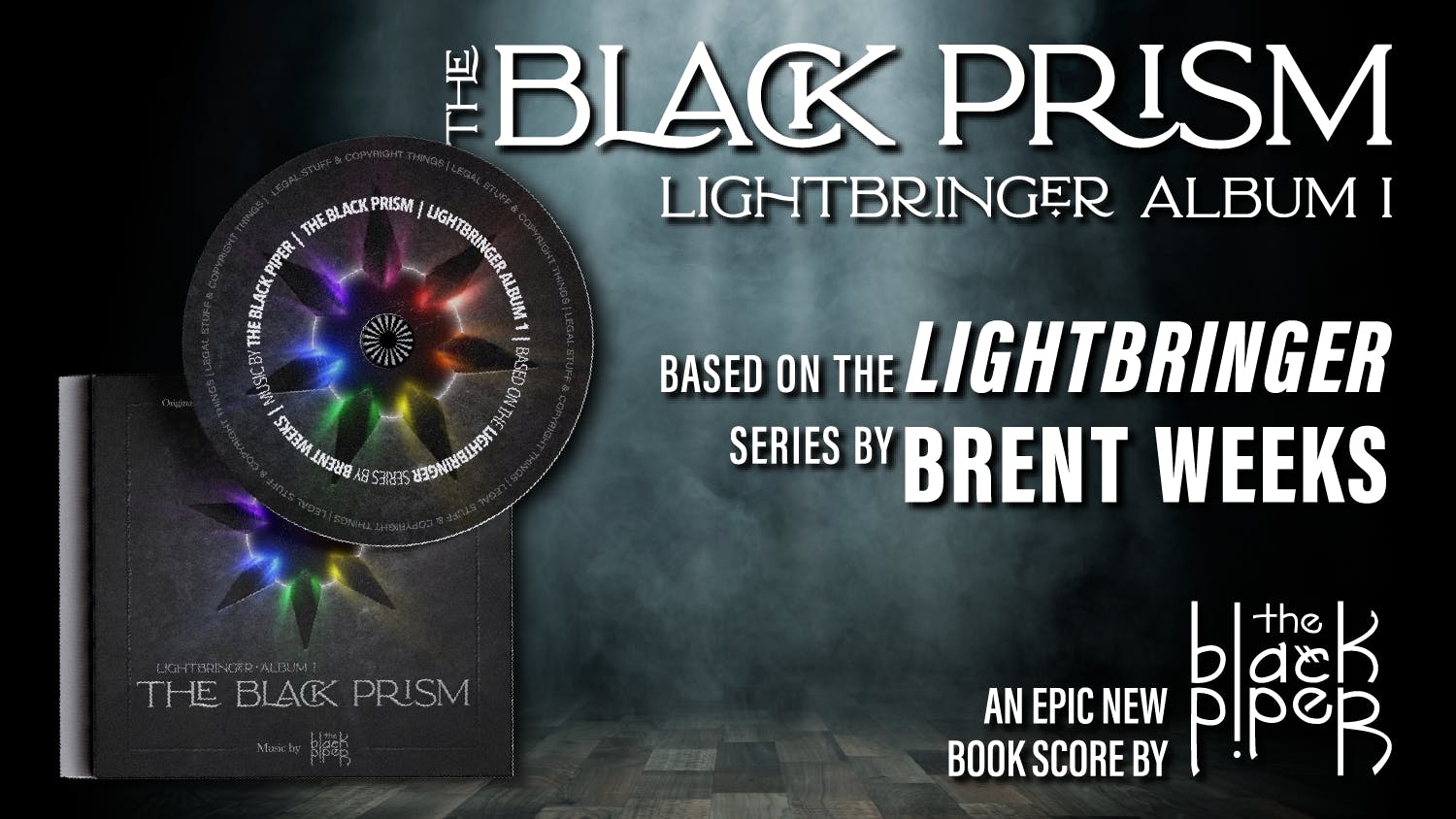 WHAT IS THE BLACK PRISM BOOK SCORE?


Music in films is so compelling that by listening to a soundtrack, fans are pulled right into the world, instantly reliving the journey.

The Black Prism (an official book score based on Brent Weeks's Lightbringer series) follows the story of Kip from his childhood trauma during the massacre at Rekton and his threshing at the Chromeria through his time as a Blackguard trainee and the acknowledgement of his status as the illegitimate son of the most powerful man on the planet to the epic battles pitting drafters against the monstrous Color Prince.

Here's a promo sneak peak at the LIGHTBRINGER THEME by composer Nikhil Koparkar:

HOW DOES IT WORK?

The album engages your imagination in an exciting way! While film soundtracks evoke a vision crafted by the filmmakers, a book score drafts vivid imagery directly from your imagination, transporting you into the heart of the story. The Black Prism plunges you straight into the Seven Satrapies.


Here's How It Works - Words From the Composers and Fans:


Every project, from the story to the sound, is different. Throughout the pre-development process, we take great care in designing the music with the story in mind. We aim to present the listener with an auditory experience that is cinematic in style and honors the stories from which the music is adapted.

To give you an idea of the cinematic style of our music, here are a few excerpts from our debut soundtrack, Kaladin, based on Brandon Sanderson's The Way of Kings:

First Time Backers With Questions On How To Pledge:

Please see the FAQ for an understanding of how crowdfunding works, when you will be charged, and what happens when the campaign is over.

Locked rewards will be unlocked as we reach specific funding goals.

After you have pledged, come back here and simply click the image with the item you want!

You'll be directed to the Pledge Checkout page. The "Total Pledge Amount" will update to include the funds for your selected tier with the additional funds for the item you want to Add On! All you'll need to do is click "Confirm Your Pledge" and your pledge will update with your new fund total. You'll need to do this for each item, or you can simply add up the amounts for everything you would like, and add that amount to your pledge total amount on the Pledge Checkout page.

For a more in depth understanding of how add on items work and the process, visit this section.

The Blinding Baton is a handmade conductor baton made in the style of the Blinding Knife.

The Blinding Baton will be available to purchase in the Pledge Manager after the campaign is funded. ** There will be a limited quantity, sold on a first-come, first-served basis. If you choose to add on the $175 for a Baton before the Pledge Manager, we cannot guarantee a Baton for your purchase, but it will still help us achieve our funding goal!

The world of Lightbringer presents us with a unique opportunity to offer a special reward: an Illuminated Chant Sheet.

This page will not contain artwork and decoration specifically designed to fit in the world of Lightbringer, and the chant music on this page will be music that you hear on the album! The paper will be a high quality paper - parchment, if available - and will contain gold foiling. What's more, if we unlock the adult choir stretch goal (see Stretch Goals), these sheets will be used by the choir on the album.

I've been dreaming this up for a few years, and I'm so excited to finally reveal it! And it's such a unique reward that it gets its own section.


OK, that statement may be a little sensational, especially since it can be hard to even get published that first time. Or the second time. Or the... well, you get it. You're the writer, after all!

And yet... from the day that you started typing your first draft, you dreamed of the day when your story would get its own adaptation. Perhaps you jam out to epic, sweeping, or even creepy themes while you lovingly craft your favorite character - and then mercilessly kill them - wondering when your stories will have epic and sweeping (and creepy) themes crafted for them.


As Hollywood film composers, we've been innovating by adapting stories from authors like Brandon Sanderson and Brent Weeks into full musical scores/soundtracks, but we want to bring our services to you: the up-and-coming authors, the novices, the yet-to-be-discovered. The difficulty comes when you realize that hiring a Hollywood orchestra costs tens of thousands of US dollars. Shoot, just the cost of hiring a Hollywood composer to write a theme can average $1k USD per minute of music.

When we Kickstarted Kaladin, we offered a special reward: our services as composers. A fair number of our backers seized this opportunity, ordering custom songs for their loved ones, wedding pieces, video game soundtracks, and more.

For this campaign, we will be offering our services as composers once again, but with a twist!

Embark with us on a novel adventure <pause for effect>... one that has never been undertaken before (to our limited knowledge). We are compiling an anthology of flash fiction stories, and you have the chance to be a part of it. By pledging at the Anthology Submission tier, you will get... (drumroll)...

(Everyone else gets to buy their own copies and enjoy our combined genius.)

How good could a group of Hollywood musicians who have been entrusted with such films as La La Land, Fantastic Beasts, and Star Wars actually be at compiling an anthology of literature?
Well... we've partnered with a professional editor who has five years of experience and works as an acquisitions editor for Havok Publishing. Problem solved!

* Fine print here about how we obviously can’t guarantee purchase counts, and other notes about our relative optimism, marketing campaigns, and connections to lovers of stories and soundtracks.


Join us in an adventurous endeavor that will capture the hearts, minds, and ears of readers over the world. You're guaranteed a spot in the anthology if you pledge through this campaign.

You can find submission guidelines here.


Simply select any pledge tier that includes the anthology (tier 3 and up), and you will get a copy of both the anthology and the soundtrack. It’s that simple!

By backing this project, you are funding the creation of a 6-song, cinematic-style Book Score. But our vision is much grander than that. Not only do we have our hearts set on producing a full 29-track album (90-100 minutes of music), but we've been in contact with some amazing recording groups. With your help, we can unlock the recording of this album with a gorgeous and lush European string section, an award-winning children's choir, and some of Hollywoods finest soloists.

FAN TESTIMONIALS FOR THE BLACK PIPER

Whether you've read Lightbringer and want to be transported back to the first time you read it, or you'd love to see a score for your favorite book, pledge now and spread the word to help us ignite a movement!

HOW TO ADD ON ITEMS


BackerKit is working on a way for backers to be able to "add on" items to pledges during the campaign. In the meantime, for this campaign, we have to follow a few steps to add items:

You can increase your pledge at any time during the campaign for further additional rewards.

EXAMPLE: If you are interested in being a part of the Virtual Choir and you also want to add the Prism Merch Pack when it becomes available, you would:

NOTE: For items that are currently locked, once we reach the funding goal associated with the item you want (as indicated in the Stretch Goal schedule), you can increase your pledge. In the example above, you might decide you want the full Ultimate Pack instead of the Prism Pack, so you would increase your pledge from $205 to $325 ($175 base tier price + $150 for the Ultimate Pack).

We welcome international orders! Unfortunately, we cannot ship everywhere. Based on This List from USPS, we are unable to ship to the following countries, with a couple additions:

Even if we can't ship to your country, you can still back Tier 1 for the digital album!

When will my pledged items ship out?

We anticipate fulfillment in the late Fourth Quarter 2022. We will post regular updates, including any dates from our partners as we receive them. Our plan is to ship all physical rewards together in order to simplify fulfillment.

When will shipping be charged?

What if my shipment gets lost?

For any shipments sent outside the USA, we will NOT bear the expense of reshipping lost shipments.

Projects like Kaladin and The Black Prism cannot be done in isolation. We have an incredible team, which is only growing.

If you're interested in the behind-the-scenes look at productions or in joining the conversation, you can find us in a few places:

All of us at The Black Piper are humbled and so grateful for all of the support and encouragement we have received - and continue to receive - from our fans. From those who backed our debut album to all those who continue to email us... to you! We wouldn't get the chance to try out our new ideas without such an incredible community.


We learned so many valuable lessons through our debut on Kickstarter, and your support through challenges and delays in fulfillment chains and personal hard times made all the difference. With your support here on BackerKit, we will only be able to reach new and amazing heights!

All our amazing volunteers, Discord moderators, focus group, and testimonial fans, and others not yet listed anywhere else:

(And more to come as I get permission to credit them.)