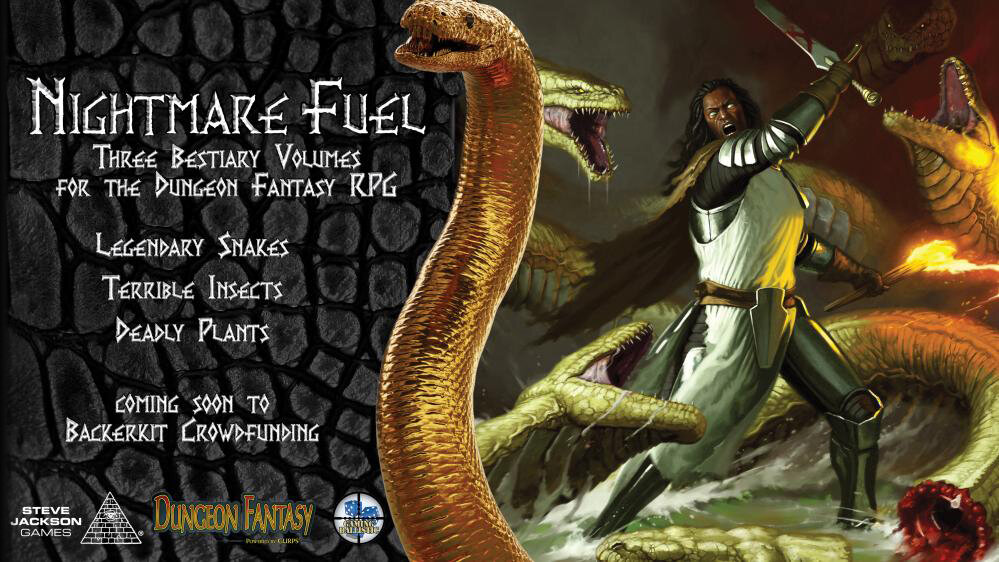 Join 1,018 other people!
Gaming Ballistic is thrilled to present the next volumes in a hopefully ever-expanding set of ready-to-play creatures for your Dungeon Fantasy RPG games...or anything else that needs some horrific fun!

Why Did it Have to Be Snakes?


Always a classic. From the powerful spawn of the World Serpent Jörmungandr to the mythical hydra. The flying coatl and the (totally not a) medusa. These legendary creatures come in all sorts of sizes, ready to crush, envenom, and petrify delvers. Or swallow them whole.

And of course, since no fantasy world is complete without serpent cults, this book covers them as well. "I will not turn into a snake. It never helps."

We disagree! Come ... join us. The great and powerful Dulsa Thoom will lead you to true happiness! His followers travel the world to bring word of his greatness, and also sell you healing balms and oils.

Now we know why it had to be snakes! How could it be anything else?


What's more terrifyingly awesome than a swarm of insects? A plague of giant, man-eating insects.

Really, what could be better for the Dungeon Fantasy RPG than a bunch of creatures with their skeletons on the outside? Or perhaps no skeletons at all? Armored monsters with pinching claws and stinging tails? Oh, yes. Count me in.


From giant ants to ant-men. Scorpions both swarmed and super-sized. And spiders of course. From ancient near-gods (who are absolutely not spawns of Ungoliant) to baby acid spiders. Does it sting, bite, enweb, or just look creepy?

This book is a straight-up catalog of crawling horror: At least 32 different insects, arthropods, and near-human (-ish? -oid?) creatures, ready to play.


Ah...what better than to spend time in nature? The foliage rustles in the breeze ... wait, are those footsteps? Is that plant walking? Shambling? Hey! That thing has teeth!

...and vines. And dripping goo?


Sometimes it's the scenery that's out to kill you. From awakened trees, and a shrubbery that brings you where it wants, to things that are definitely not ents. From literature and legend, a host of vegetative monstrosities populate this short volume.

Evil willows. Walking foliage. Clinging vines. Carnivorous flytraps. Sixteen different flavors of plant monster. Sing it with me: Delvers sure look like plant-food to me!

The Norðlondr Óvinabókin - the Nordlond Bestiary and Enemies book - delivered nearly 200 creatures, ready to play. The three new products support this book, though they are usable without it!

A limited number of US-only pledges will be available for those who missed the Kickstarter at the end of last year.

By submitting your email address, you agree to receive news and updates about Douglas H. Cole's projects.