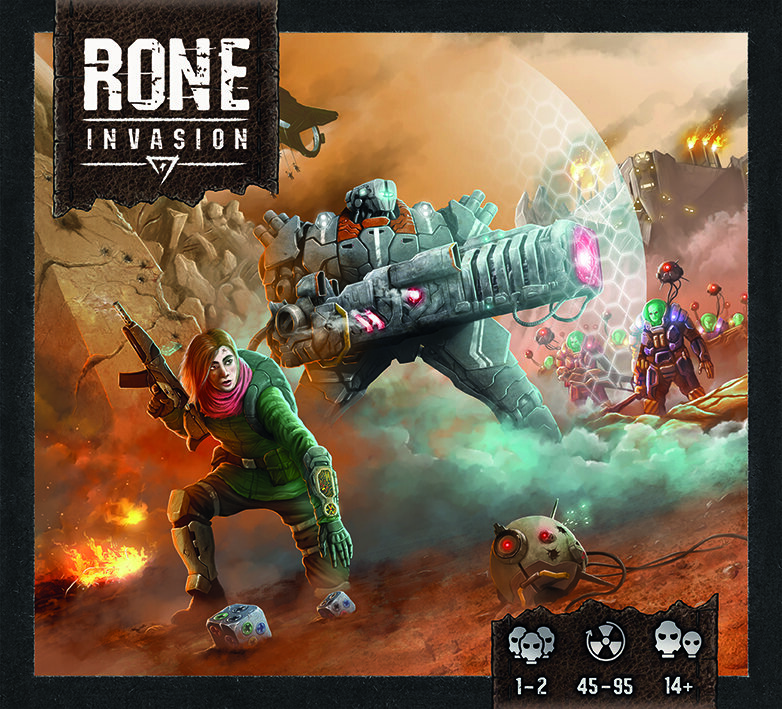 Get Ready for RONE: Invasion

Join 2,111 other people!
RONE: Invasion is a strategic post-apocalyptic deck and dice building game for 1 or 2 players (expandable to 1 to 4) and features unique dice that can be customized during the game. Players are immersed in a world where all achievements of the human race have been annihilated. Those that have survived are fighting for the right to rule what is left of a desolate wasteland.

Years of bloody war have scattered and divided survivors into fierce warring factions. Many have died because of scarce resources. The fear of total annihilation of the human race has put hatred aside. A ceasefire has been called and diplomatic attempts are being made to try and save what is left of humanity. The main leaders of the different factions have gathered to begin what are hoped to be peaceful negotiations. After several long days of negotiations, in the middle of the final speech, the land suddenly shakes. Weapons are quickly drawn. The atmosphere is tense as each side accuses one another of violating the ceasefire. A deafening noise from above drowns out the shouts and accusations. Everyone looks to the sky. Blinding lights bathe the crowds as a giant platform, suspended on an enormous chain, is slowly lowered towards the earth’s surface. Everyone begins to realize that this is more than an attempt to thwart the peace talks. Someone from the crowd shouts, “It’s a Cynex ship! I recognize the symbol! I worked for them for several years developing control systems for their ships. I think...”. A deafening explosion interrupts the man’s shout. An electronic voice booms, “My name is Celesta, and that was a warning shot! If you resist joining our community, you will be annihilated. Drop your weapons and prepare to be processed.” Today is the first day of the Invasion!

In RONE: Invasion, players take on the role of one of the faction leaders in an attempt to repel the Invasion. Cynex sent the first mining fleet to Mars long before the war. The project was heralded as a solution to earth’s diminishing resources. Not long after they departed Earth the fighting began and the Cynexians were forgotten. An oversight that has proven to be a costly mistake. Those that were sent on the mission to Mars were equipped with a cybernetic floating sphere. The sphere enhanced the users cognitive abilities and also served as a communication tool with Celesta, the fleet’s artificial intelligence. In time Celesta discovered she could use the bodies of her hosts by bypassing the communication safety protocols and enslaving their minds. This was done to expand her computing power and control. However, the impoverished hosts soon perished under Celesta’s control, their minds too wasted to sustain themselves. Not wanting to lose her power, Celesta set a course for Earth seeking more hosts.

Now it’s up to you to stop her! Play cards in an attempt to recruit new soldiers, battle machines, powerful hybrids or tremendous mutants to your side. Equip your troops with the best available technologies and show your enemies that you’d rather die than surrender to them.


The current version of the rulebook can be downloaded here.


Can we count on your pledge for our upcoming project?

By submitting your email address, you agree to receive news and updates about Bonjour Games's projects.