All day-one backers of the physical edition will get a FREE reward, so don't miss out! Launching in: 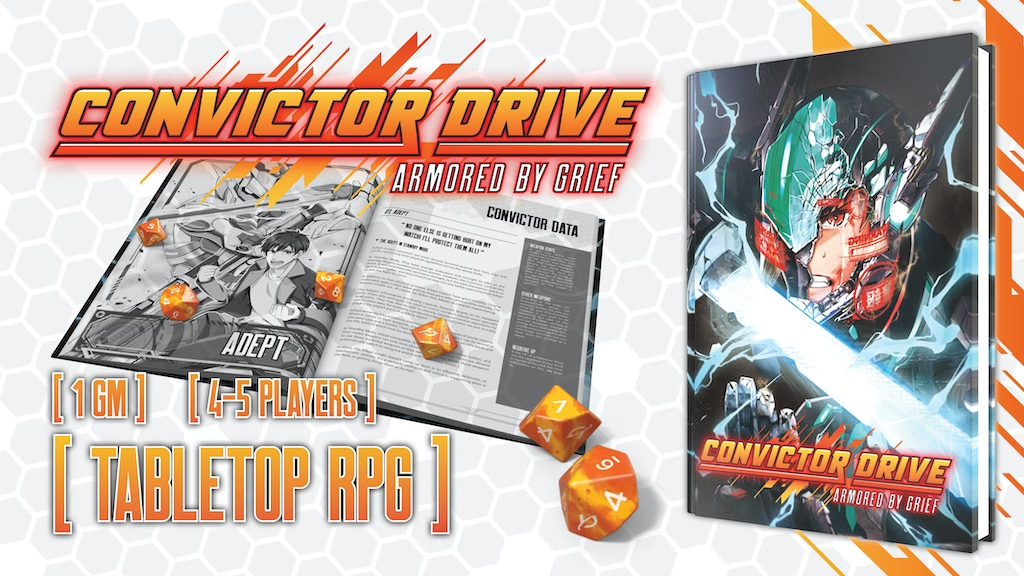 Get Ready for Convictor Drive: Armored by Grief

Don't miss your chance to get a free pre-gen character pack by backing day one!

Convictor Drive: Armored by Grief is a superhero- and tokusatsu-inspired TTRPG from the team behind Picaresque Roman that features action-packed combat and roleplaying, an intuitive d10 system, beautiful anime art, and a slew of unique and engaging gameplay mechanics.


An Overview of the Game:


The world is changing, and nowhere is it changing faster than in the Yokohama Zone.
In this prototypal city, established by the Japanese government as a test bed for the burgeoning science of mechatronics, the citizens enjoy everything from drone delivery to AI assistants. But technology is only as benevolent as those who use it. Thanks to the deadly exoframes and sophisticated hacking tools that mechatronics also makes possible, crime is undergoing its own renaissance, and the law is struggling to keep up. That's where you come in.


In Convictor Drive, you'll create and roleplay an employee of DRIVE Private Security, a company established by no less than the father of mechatronics himself, Mr. Aitani. Equipped with energy-generating nanomachines, your characters can transform into their custom Convictors—the most advanced exoframes in the world—and fight for what's right. There are multiple Convictor types to pilot, each with its own strengths and limitations, and it'll be up to you and your party to figure out how to best utilize them to help keep Yokohama safe.


Piloting a Convictor isn't something that just anyone can do, though. Only those who have suffered loss and still feel the pain of it can will their bodies to power the Convictors and turn the regrets of their past into justice for the present.

What you'll be getting:

Don't miss your chance to get a free pre-gen character pack by backing day one!

By submitting your email address, you agree to receive news and updates about LionWing Publishing's projects.