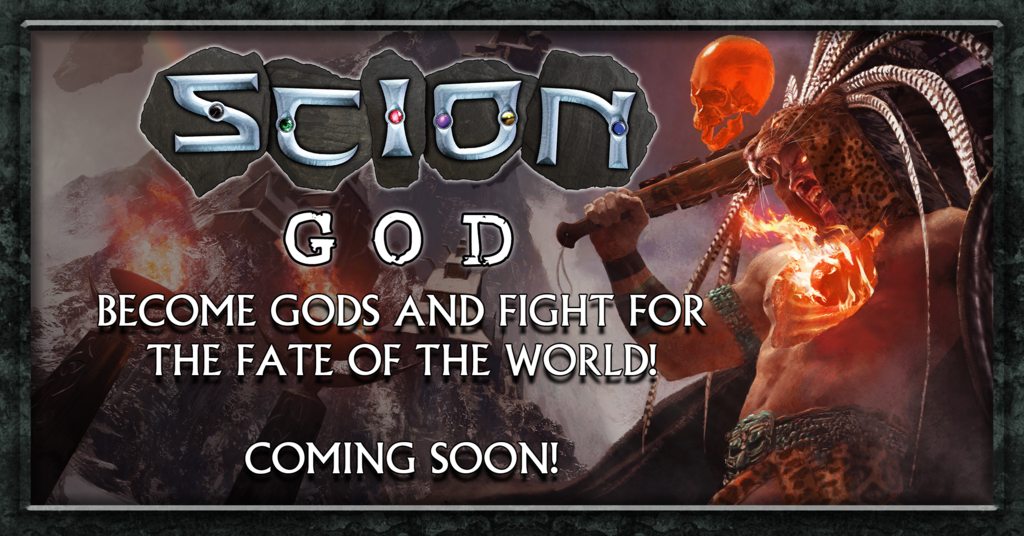 Get Ready for Scion: God

Join 618 other people!
You are the child of a God, born to the magic of yesterday and the promise of tomorrow. You live in a World of myth, where every ancient story is true. Your ancient enemies, the Titans, stir in their prison beneath the lands of myth, and the specter of war falls across the heavens. In this age of turmoil, you seize your birthrights and feel the call of your blood.
Find your destiny. Live the Myth. Embrace your Fate.


SCION: GOD
Welcome to the final stage of your journey. After all this time, your hero becomes a God.
Scion: God brings Scion stories to their final chapter with all-new rules for players and guidance for Storyguides. This completes the journey begun in Scion: Origin and Scion: Hero and continued through Scion: Demigod. Gods face the impossible balance between a desire to interfere with The World and their duty to protect the Overworlds. It presents all the rules and lore Storyguides and players need to craft the thrilling finales of their Scion chronicles.

SCION TABLETOP ROLEPLAYING GAME
The ancient powers never fully went away. They wander our roads and cities, mingling with the teeming masses of humanity. You are one of their children, born to the magic of yesterday and the promise of tomorrow. Now begins the war against the Titans, elder beings who rage against the human world and its wayward gods. Commanding the push and pull of Fate, you will ride into battle and work wonders, the better to prove yourself worthy of legends.

By submitting your email address, you agree to receive news and updates about Onyx Path Publishing's projects.