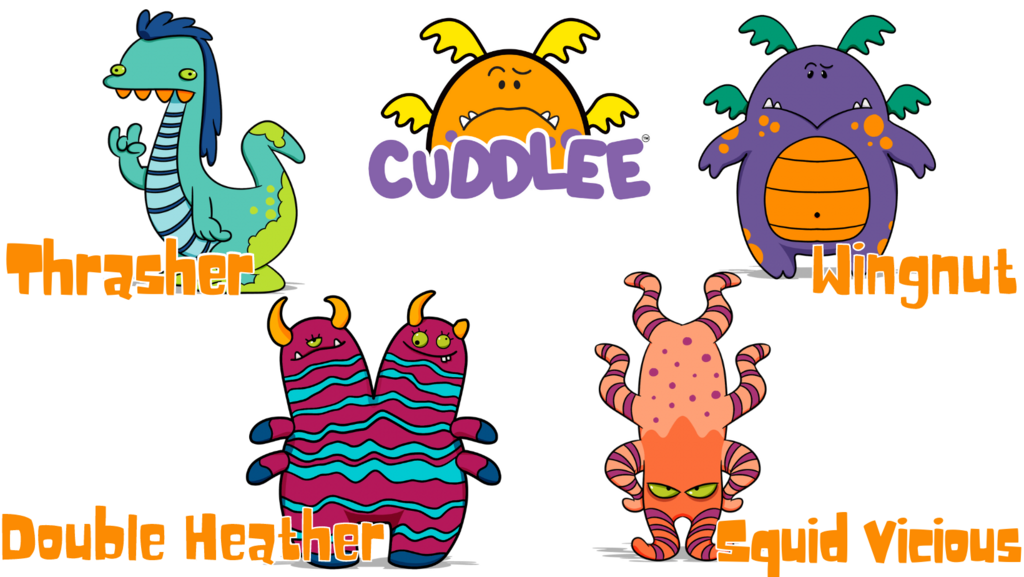 Get Ready for Cuddlee Kaiju: Season One Plush Release

Join 2,660 other people!
The most terrifying monsters in history have only one goal: TO CONQUER WITH CUTENESS! From Ox Eye Media and Rip Rap Toys, Cuddlee Kaiju: Season One launches in June with four original plush characters and an exclusive comic book ashcan.


Cuddlee Kaiju is a line of plush toys debuting with four HUGE personalities exclusively on BackerKit: Wingnut, Thrasher, Squid Vicious, and Double Heather. Their official character descriptions are as follows:

Wingnut - Ancient Name: Wingoru - Air Assault Kaiju - For thousands of years, the dreaded monster formerly known as Wingoru commanded the sky. Domination was once a breeze for one of his hulking stature, but his days of conquest are over. These days, he longs for simpler satisfactions; usually, a CUDDLEE and crushing snuggle will do.

Squid Vicious - Ancient Name: Squidormmu - Deep Sea Kaiju - The dark of the ocean is a haunting place, with beasts more terrifying the deeper you explore. None more sinister than the creature formerly known as Squidormmu! With tentacles of death, and a hunger for the souls of sailors traversing the seven seas, Squid Vicious has found a more effective way of luring vessels into the deep dark beyond; SQUATS.

The THICC-er the booty, the easier to LOOT-y….

Double Heather - Ancient Name: Dok Heeter - Inseparable Twin Kaiju - Born from the expanding layers caused by earth’s tectonic shifts, Dok Heeter’s monumental frame is tough as rocks, but that doesn't mean they’re not sensitive. The first and only Inseparable Twin Kaiju in existence, Double Heather are more of a danger to each other than they are to the outside world.


Cuddlee Kaiju is the latest brainchild from Gunn, who also co-created fan-favorite comic series such as Good Boy, Warcorns, Postmasters, and more. Gunn is the writer of the Cuddlee Kaiju comic series, coming this year from Source Point Press. A collectible ashcan of the first issue will also be available exclusively through the Cuddlee Kaiju Season One campaign.

Exploring the origin of the Cuddlee Kaiju, the comic series follows Acclaimed Archaeologist Braxton Ravenscroft in his search for the mythical Hinode Gem. Legend tells of the gem's ability to summon an ancient power. Enchanted by his professional curiosity and personal ambition, Braxton heads to the Japanese Alps in hopes that the mystical jewel can be found once and for all. But the secrets held by the gem, and the ancient evil it unlocks, endanger all of humankind.

By submitting your email address, you agree to receive news and updates about Cuddlee's projects.