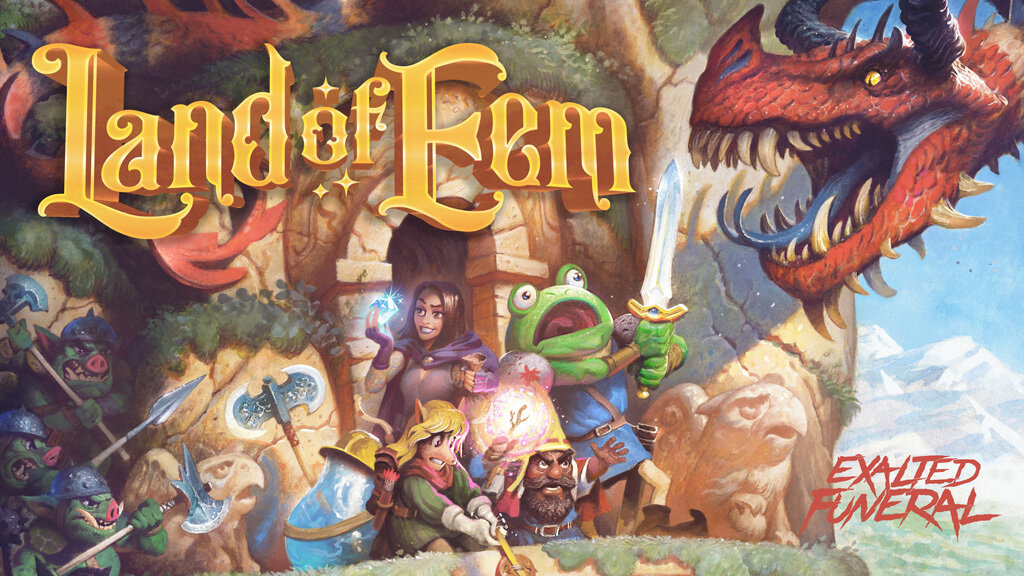 Get Ready for Land of Eem

Land of Eem is a lighthearted fantasy RPG presented in an easy to use, easy to learn Core Rulebook. It's packed with rules and resources that encourage players to be creative and ease the burden on GMs.

In addition to the Core Rulebook, we're launching a fully illustrated Bestiary and the first Land of Eem Sandbox Campaign Setting: The Mucklands, a realm of 6 unique regions filled to the brim with locations, NPCs, and quests.


Rules That Support Creativity: Land of Eem emphasizes player creativity and collaborative storytelling, with character abilities that allow players to invent and shape the world around them. The game is more about roleplaying, teamwork, exploration, and finding lost treasures, than it is about always fighting monsters--though that's definitely part of the game!

Colorful Characters: Choose from 16 Folk species (like the gelatinous goo, skeleton, or the turtle-like quortle), in addition to 6 character Classes (The Bard, The Dungeoneer, The Gnome, The Knight-Errant, The Loyal Chum, and the Rascal) each with 20 unique Abilities. Play as a Shrym Knight-Errant riding a trusty zozo bird, a Mushrum Dungeoneer exploring the ruins of a lost civilization, or a Goblin Rascal planning a heist against a river baron!
Travel and Exploration: Explore the Land of Eem with robust travel rules that will take characters across a beautifully illustrated hex map. Paired with the Mucklands Sandbox, Land of Eem offers player-driven exploration and tons of GM tools that are easy to use.

D12 Dice System: Utilizing the criminally underused D12, Land of Eem’s simple dice mechanic allows for degrees of success and failure. Both the GM and players are encouraged to have input on interpreting the results!
Fast, Fun Conflicts: While combat is sometimes avoidable, getting into a scrape or two is inevitable. Combat is quick and decisive, with a frequent counterattack mechanic that simulates duels.

By submitting your email address, you agree to receive news and updates about Exalted Funeral's projects.