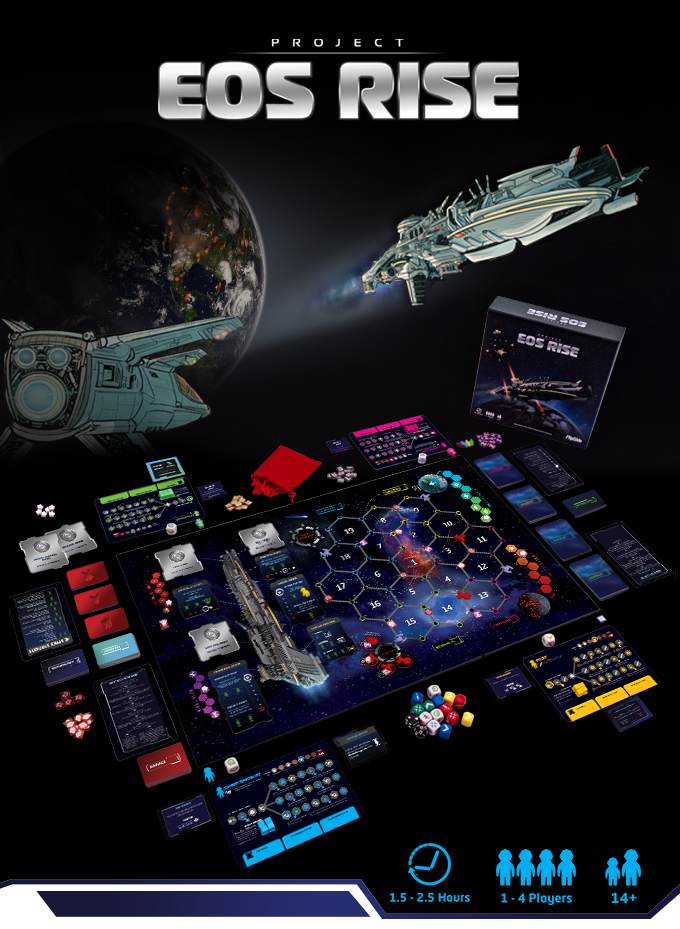 Project EOS Rise is a one- to four-player cooperative space adventure game that mashes up Worker Placement, Push Your Luck, and Dice Placement game mechanics. 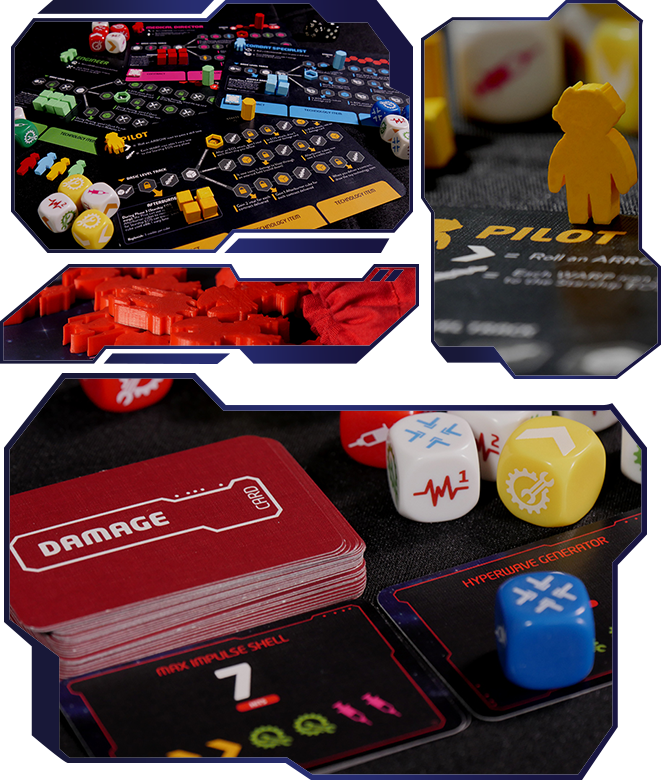 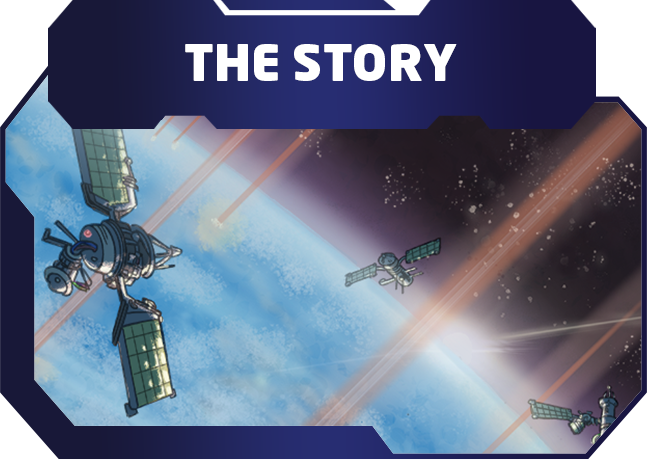 As the scientists began to unpack the FRBs they discovered practical guides to technological developments that previously had been only theoretical. However, the signals were fragmented and impossible to interpret.

To save Humanity, it would be necessary to travel across the universe to collect the FRBs, one by one, and piece them together.

The Galactic Citizens Federation has built their first interstellar spacecraft, the Starship EOS . Its mission: To collect the FRBs and locate the Paradise Planet before Earth is reduced to a barren wasteland.

But remember that not all Alien species wish to see Humanity succeed. Whether or not you find the Paradise Planet depends on the choices you are about to make.

An Open Universe To Explore, With High Replayability!

A “Roll For Location” game system that ensures each playthrough generates a unique universe with unique challenges.

Whatever the challenge, the four characters - Pilot, Combat Specialist, Engineer & Commander - can advance their skills strategically to best benefit your mission.

Events add a further twist to each game as some are helpful but others can lead to disaster. And you’ll never know which it will be until you draw the card! 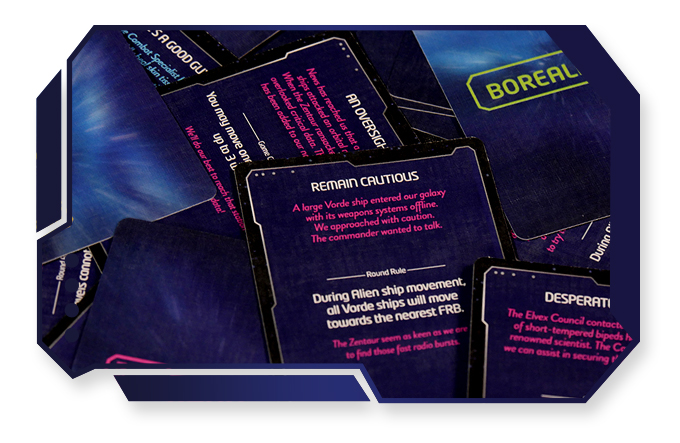 Your Choices In This Sandbox Adventure

Do you spend credits to expand the EOS and open new actions like mining, scanning, or crafting? Do you become a smuggler and deliver interesting cargo to distant galaxies to gain intel and advance your progress? Do you attack Alien ships using the combined strength and skills of the crew? 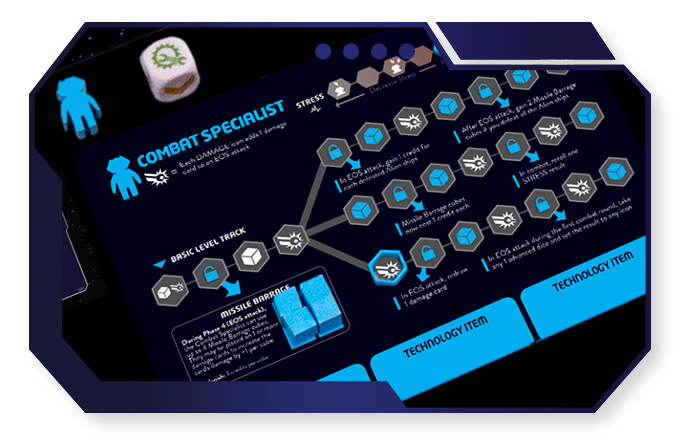 As a massive thanks for helping us reach our goals, all games from the Kickstarter print run will feature some extra event cards to help randomize your adventure. These cards will only be available in boxes that are a part of our initial print run. They will not be sold individualy on our E-Com store.

Project EOS Rise is played by cycling through 9 phases to complete a game round, then resetting for the next round.

In this first phase the players can spend a few moments talking about anticipated situations or how to accomplish a particular goal.

Each player announces what action they are performing and places their Character meeple onto an Action icon in the Starship EOS or a character's private room.

The Pilot is responsible for warping the EOS to neighboring galaxies. Will you deliver cargo, attack Alien ships, or pilot your way to riches? The fate of humanity will rest on your choices.

Weapons are locked and ready to fire! In this phase, the entire crew will partake in a dice placement mini-game trying to activate damage cards to destroy Alien ships.

WARNING! in this phase, all known Alien ships are strategically moving throughout the universe, trying to hunt down the EOS or protect valuable FRB signals.

Shields up! Any Alien ship that entered the same galaxy as the EOS will engage. Hopefully, your decisions have left the crew with some defenses from this onslaught.

As the game progresses, the Universe is likely to grow crowded with Alien ships. As you hunt for the Paradise Planet, the Aliens will be hunting you. The threat of your being overrun is real.

You are one year closer to Earth's destruction. In this phase, the crew will draw an Event card for the region where the Starship EOS has ended its movement. Events can change the rules of the game during the next round.

It's not over yet? Great! Take a breath, calm your nerves. Time to clean up, collect funding and reset for the next game round.

To Eliminate Unnecessary Risk: My mantra for Project EOS Rise's is to have the best possible chances of a product arriving on your doorstep. This is my first Kickstarter, and to eliminate unnecessary risk, I wanted to eliminate the complexity of stretch goals.

This is why, from the start, we are providing the best possible quality for the cards and wooden components in the box. No golden plush toys in our campaign. Expect a solid gaming experience that will last through repeated play sessions.

It's no secret this is my first time attempting to kickstart a game. I have spent years developing the best possible experience for gamers. I have worked with the best graphic designers, rules editors, and playtesters in the business. I have joined and listened to the best in the board game communities' feedback. I have sought counsel and advice on many topics to set up Project EOS Rise for success. As a Backer of countless Kickstarter games myself, I have witnessed the full gambit of possible things that can go wrong with a campaign. Project EOS Rise is more than a game to me. It's a small step towards becoming an indie publisher, and delivering this game to your doorstep is paramount to this goal. With this sprit, I want to pledge all backers.

By submitting your email address, you agree to receive news and updates about James Baker's projects.