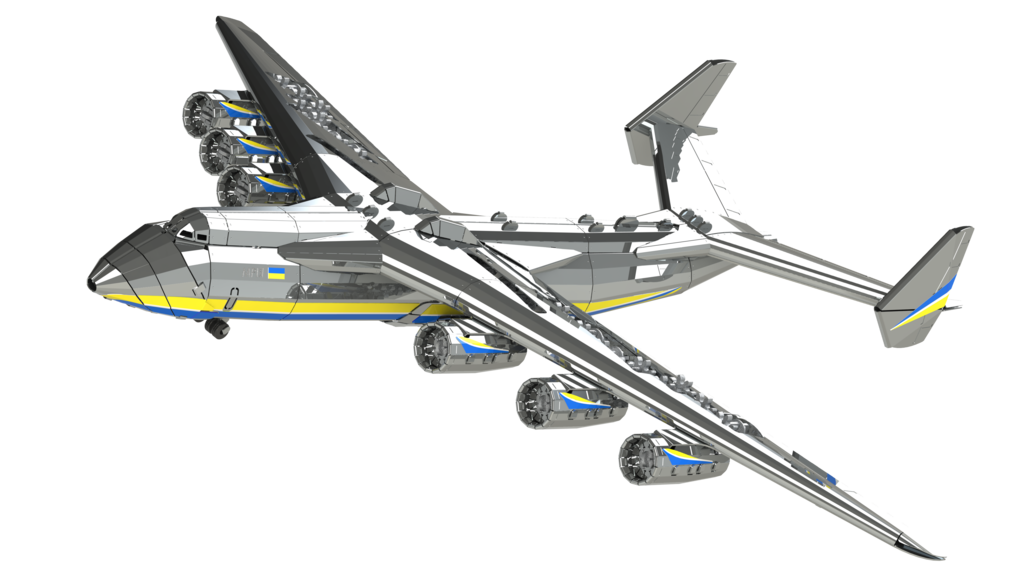 Get Ready for Ukrainian Dream

A STORY OF MRIYA, THE UKRAINIAN DREAM

Mriya, which was designed to carry twice as much as a Boeing 747, has been the flagship of the aviation world for more than thirty years. With an overall length as long as a football field, it has a maximum take-off weight of up to 1.32 million pounds (about 598 tons). It dwarfs the 747, both in size, and carrying capability.


Mriya’s takeoffs and landings have attracted aviation enthusiasts from all over the world.

Tragically, in late February, 2022, during the Russian attack on Ukraine, the Mriya was destroyed.

Volodymyr Zelensky, President of Ukraine, sadly announced, "We lost our Mriya. The old one. But we will build a new Mriya. Glory to Ukraine!"


Chief pilot of the destroyed Mriya, Dmytro added, "We must complete the second Mriya"


We believe the "Ukrainian Dream" is eternal!


Our team of engineers and designers have created a tribute to Mriya – by building the mechanical model, the "Ukrainian Dream".


We have partnered with Antonov Aviation, and officially support:
·       The rebuilding of the Mriya aircraft
·       Housing for employees of the Antonov state company, whose homes were destroyed by the Russian attack
·      Education and training of new aviation engineers and pilots for Ukraine


By the way, did you know that "ANTONOV" aircrafts are movie stars?

In “2012”, a Roland Emmerich's film, the Mriya called AN-500, became a participant in one of the most striking scenes in the blockbuster.
All of the viewers remember its breathtaking flight between the buildings of the legendary hotel-casino Wynn Las Vegas.

In “Die Another Day”, a half-billion-dollar blockbuster from the epic James Bond 007 series (An-124)

This Mriya model will give you countless hours of enjoyment, and after “building” the legendary aircraft with your own hands, you will be proud to display it in your home or office.

The mechanical model of the AN-225, “Mriya” aircraft, called then "Ukrainian Dream", is an officially licensed product, and is produced under the agreement with Antonov Aviation.


To show the strength, and Spirit of the Ukrainian people, and emphasize that icons live longer than metal, the Ukrainian Postal Rervice has issued the limited edition, postage stamp "UKRAINIAN DREAM". Dedicated to the world’s most powerful aircraft. And while Ukrainian aircraft engineers work on building a new Mriya, the "UKRAINIAN DREAM" will fly around world on postcards and envelopes.

Developing metal models from high-grade stainless steel is a more complex process than models made of other materials. Our engineers and designers have worked diligently and had creatively.


After many different sketches and prototypes, theyfinally reached the one, everyone loves.


A Certificate of Appreciation, signed by the chief pilot and captain of AN 225, "Mriya", Mr. Antonov Dmytro, will be presented to each backer.


Lets rebuild the Ukrainian Dream together!

OTHER NEW MODELS to support


In the early part of the 20th century, flights across the Atlantic were a challenge for both pilots, and passengers. Then in the late 1930s, an aircraft was built that could provide passengers with unprecedented comfort, and safety. It was the Boeing 314, also known as the Yankee Clipper.


It was actually a flying luxury hotel, with reclining chairs, a restaurant, silverware, and top notch service. The Yankee Clipper could stay in the air for up to a day without refueling. And in the rare case of a malfunction, it could land on the water, and continue its journey as a boat.


The Douglas "Dakota" DC-3 was the largest passenger, and cargo plane in the history.


From the late 30s, it continued to fly for over 80 years. This aircraft is the result of ingenious engineering. The Dakota DC-3 was not only a source of inspiration for pilots and the engineers who built it, but was an inspiration for future designs. The Dakota became the hero of many books, and adventure films. The simplicity, reliability and iconic image, of this aircraft inspired us to create the "Remarkable Douglas" mechanical model.


Despite more than half a century, the design of space rockets has not changed much. And it was these rocket designs that inspired the designers of "Metal Time", to create the "AD ASTRA" model. Ad Astra, means “to the stars,”


Today we have traveled the stars for over 50 years. Our engineers’ dreams are that one day real space exploration vehicles are launched to the most obscure locations in the solar system. Which is why we added features to the "AD ASTRA" model resembling spaceships from science fiction books, and movies of the last century. By combining history, and science fiction our AD ASTRA model portrays our version of an interstellar rocket.


Back in 1948, а mysterious object fell то earth near the town of Roswell, New Mexico, in the United States. Many people to this day believe it to be an alien spaceship. Although there are no official eyewitnesses, the legend has become an “accepted” truth.


But you do not need to go to Roswell, New Mexico to search for а "flying saucer". We can have our Stellar Raider UFO land right at your house!


The "rays" emanating from тне center of тне ship became the basis for тне art nouveau style stand. Under the space ship, in the middle of the "rays", is а cow that aliens kidnapped for experiments (or for its milk).


Inside the model of the alien ship are its "pilots" - classically depicted aliens. Тне entire structure of тне ship rotates. The “landed” Spaceship is accented with lights.


Late on Christmas Eve, after most children have fallen asleep, a bright beam from a searchlight can be seen through the snowy mist. The the Polar Steel appears, with billowing clouds of smoke and steam.


This train will take you to the North Pole, home of Santa Claus himself. Neither high mountains, endless snow-covered fields, or thick forests will stop the train from getting to the North Pole.


The film Polar Express by Robert Zemeckis was our inspiration to create the "Polar Steel" mechanical model.


With the advancement of technology, millions of agricultural workers have been replaced by machines. These machines can sow, seed, fertilize, irrigate, and eventually harvest almost all crops. And these machines are united by one broad term - "combines". There are combines capable of very complex operations with different types of crops. One thing unites them: these machines help save the world from hunger. Because of this, the Metal Time team developed VORACIOUS HARVESTER to pay tribute to these wonderful machines.


"Voracious Harvester" is our DIY model of a combine harvester. A standard, modern, cereal harvesting machine was used as a prototype. The wheels and header of the combine rotate freely, and are connected to the winding mechanism.

Grand Prix Falcon is a model of an open-wheel race car (bolide), designed for the F1 racing circuit.


The design was inspired by the legendary open wheel F1 race car. The model is exceptional. The front spoiler, fairing and landing gear make up the front of the model. The wheels are made in the form of hollow cylinders, attached to the suspension. In the cockpit, you can see the dashboard and steering wheel. Above it is the central air intake. The main body with side air intakes hides the winding mechanism that drives the rear wheels of the model.

The design is crowned by a rear spoiler.


One of the most successful and effective tanks in World War I was the French light tank FT-17. The car manufacturer Louis Renault for a long time did not dare to go for the revolutionary configuration of the tank, which was offered to him by Colonel Jean-Baptiste Eugene Estienne.
However, the advantages of the new model were obvious, and already in 1916 the new tank entered the battlefield


Each model has it's own styled lapel pin included into giftbox, nice gift as well.

Shipping address and other details will be finalized after the campaign ends through post-crowdfunding surveys 📋 at which point shipping costs will be calculated.
As of now, we estimate: $25 per item


As most of kits include Toolkit (pliers and file) for expert's we have an extra one.
Our building kits are unique and made of eco-friendly materials.


Our building kits are unique and made of eco-friendly materials.

The image was based on the drawing of eleven-year-old, Sofia Kravchuk, from Lyuboml, Volyn Region, Ukraine, depicting the largest aircraft, flying to the stars, decorated with pink flowers.


Sofia’s drawing won the All-Ukrainian drawing and photography contest, "What is Ukraine for me?", which took place last year, as part of the celebration of the 30th anniversary of Ukraine's independence.

By submitting your email address, you agree to receive news and updates about METAL-TIME Workshop's projects.