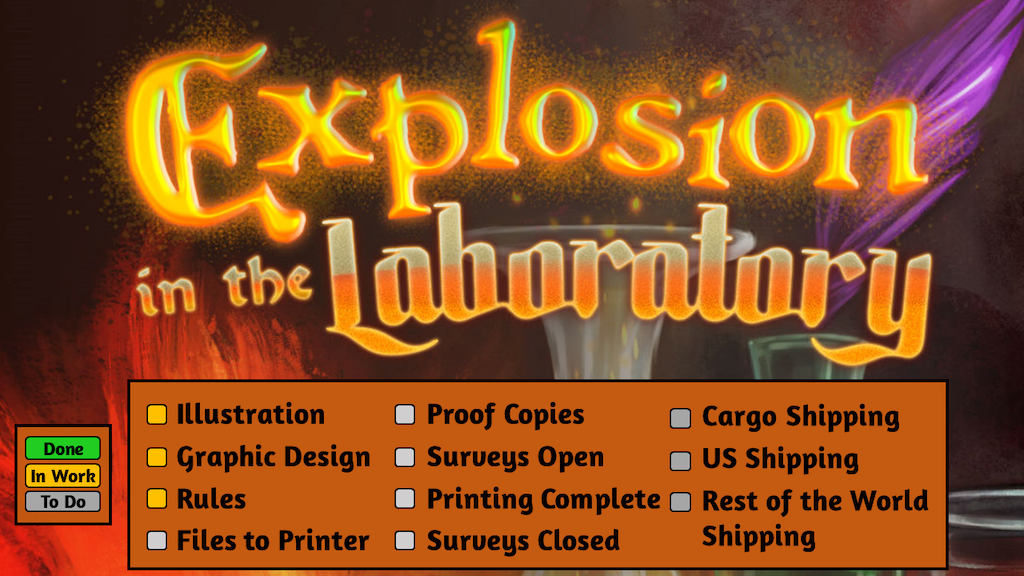 Explosion in the Laboratory

A pocket-sized press-your-luck game of colorful —and sometimes explosive!— chemicals for 1-4 players

Preorder Now!
This is a Tabletop Games project.

In Explosion in the Laboratory, players are junior chemists mixing compounds in an experimental laboratory. The more volatile the compound, the more it helps in research, but too much volatility can lead to disaster.  A fire would be unfortunate, as there is a library not too far away...


Explosion in the Laboratory is a push-your-luck microgame in which you mix chemicals into compounds to score points for both Intuition and Research. The player with the highest combined point total when the game ends wins!


Explosion in the Laboratory is the prequel to Fire in the Library, our most popular game, which is getting a second edition! It's definitely been a fan favorite, and it's getting a graphical revamp to be even more thematic!

Fire in the Library has been a favorite for many and the below video goes into details on just why that is!

What's in the Game?

Below is a How to Play video for Explosion in the Laboratory:


Explosion in the Laboratory Overview

At the start of the game, all players start with one process card, and the Danger Level is at a very safe level of one. This means that the odds of selecting a more volatile chemical are rather low! The higher the Danger level, the higher the chance the chemical selected will be volatile and result in an unstable mixture.


Phase Two is Mixing Compounds, which lasts until the player either chooses to stop mixing chemicals —moving on to the Beaker Scoring Phase— or the player mixes a volatile chemical, creating an unstable mixture. Players mix chemicals by shuffling the Lab cards, laying them out in a row, and adding the leftmost and rightmost numbers. Finally, the vial with this number on the Lab card with the current Danger Level shows which chemical you'll receive. Here's hoping it works out!

Beaker Scoring earns the player points, can increase the value of scored compounds, and allows the player to get a process card (if scoring a full Blue or Yellow flask). Players can choose to enter this Phase, but Beaker Scoring automatically occurs once they've filled three flasks. All compounds scored cause the associated beaker to rotate, making it worth more points and pushing the game closer to the end.

The last Phase occurs if you make an unstable mixture by receiving a second red chemical or a single black chemical later than the first turn. The player gains no points, but instead draws a process card, setting it to the side of their choice.

At any point during their turn, players may play a process card in their possession (if the Phase on the card matches the current Phase). Process cards can gain the player more points, change their luck, and do many other things!

At the end of the round, the Beaker with the lowest index number is rotated. When a compound explodes, the game is over! The player with the most points is the winner. If no compounds explode, start a new round, with players taking turns based on who has the fewest points.

Rules and Print and Play

The rules are here (the rules are not complete nor do they have graphic design):  Rules Link

What People are Saying About Explosion in the Laboratory


First part is an interview with Corey and a top 5 list. Gameplay of Explosion in the Laboratory starts around 1:36

Fire in the Library Reprint

Explosion in the Laboratory is the prequel to Fire in the Library. It is the more portable version of our most loved game! Fire in the Library is similar, but supports additional players, involves players drawing books from a bag, and has a variety of tools to change up the game. It features a blend of push-your-luck elements that seamlessly blend with the strategy of playing tool cards wisely.

Below is a How to Play video for Fire in the Library:


Fire in the Library is getting another print run and an update while we're at it! The graphic design and iconography are getting an update, as is the scoreboard. It's still the game that we're known for, just a bit more thematic and clearer than before.

Reviews of Fire in the Library

There's been a ton of reviews of Fire in the Library, which you can see more of on the previous Kickstarter page and on our website!


We would love to support game stores by offering the Kickstarter versions of Explosion in the Laboratory to retailers during the campaign. Back the project at the retailer level for $45, and we'll contact you closer to when we ship out rewards to get a count of games that you wish to get! An invoice will be sent to you before we ship your rewards.


We will charge shipping after the campaign ends. This ensures you get charged the shipping you deserve. No more, no less.


By doing this, we are able to factor in your pledge tier, add-ons, and any additional fancy things that may occur during the campaign. However, we can offer estimated shipping costs. Below is the estimated pricing for one copy of the game.


*We are currently not planning to ship to the following areas: Mexico, Brazil, and Russia.


Please keep in mind these are estimates and there can be slight variations from country to country. Also, the more items you purchase, the more shipping will cost. If you have any questions, please email us at help@weirdgiraffegames.com.
To order a second copy of Explosion in the Laboratory, add an additional $9 to your pledge with no additional shipping cost.


We are happy to discuss group orders, but these need to be handled on a country-by-country basis. Please send us an email to help@weirdgiraffegames.com including your country and the number of copies you'd like to start the conversation.


This is a tentative timeline, as there can always be delays! This should give a good idea on when Explosion in the Laboratory will get to you, though! Things could always go better than this, but I try to keep things realistic as no process goes perfectly.

Explosion in the Laboratory is the twelfth project by Weird Giraffe Games.


Weird Giraffe Games was founded to create games that are easy to learn and play, but layered with strategy.


The Explosion in the Laboratory team is comprised of the following people:

We're looking forward to talking to you throughout this campaign and beyond! Please feel free to reach out to us directly, in the comments, or via a variety of methods on social media if you have any questions, comments, or concerns. We would love to hear from you!