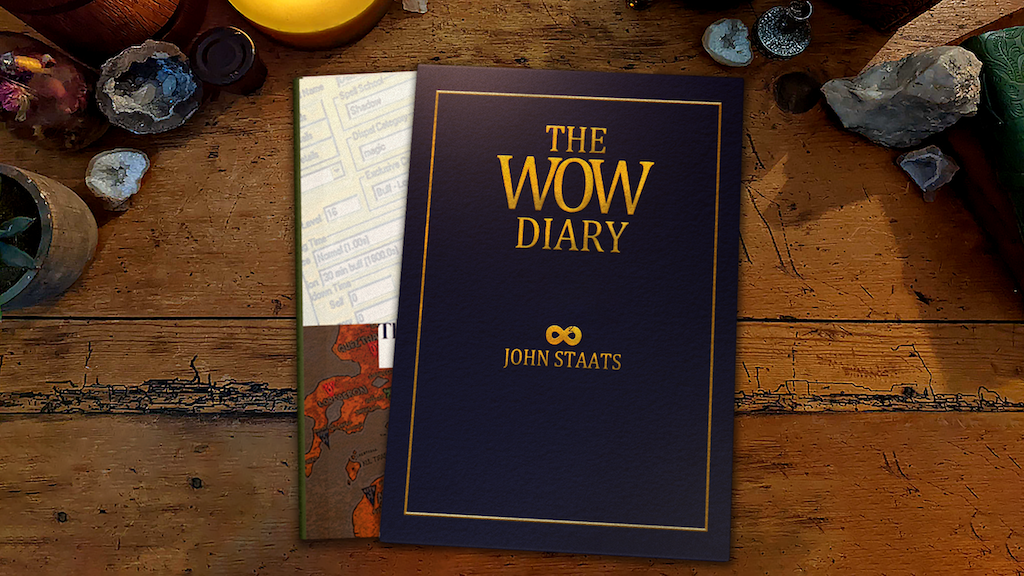 Do you want to learn the secrets, the chaos, and what it really took to make Vanilla WoW? The WoW diary is an unfiltered look into creating the most successful MMO in the world.

The World of Warcraft Diary

The World of Warcraft Diary, offers an unprecedented peek behind-the-scenes at Blizzard's development of the world's most successful MMO.


My name is John Staats, and I began writing The World of Warcraft Diary during the game’s early development when it looked like it wouldn’t ship. WoW was fraught with so many problems and setbacks I couldn’t believe game development was so messy. Thinking it would make a great story one day, I took notes to chronicle the game’s fate.
The WoW Diary has over 100,000 words and contains over a hundred behind-the-scenes photos, most of which have never been seen. It pulls back the curtain and tells stories of the developers making decisions, mistakes, and discoveries as they put together the world’s most successful MMO. I describe the team’s structure, Blizzard’s philosophy, and creative process.

The WoW Diary is packed with


We want to get The WoW Diary into the hands of as many fans and aspiring game devs as possible and we can only do that with your help. If you want to know the backstory of World of Warcraft, then this book is for you.

Tell me more about the WoW Diary

My book, The World of Warcraft Diary, offers a rare, unfiltered, comprehensive look at game development. I start at WoW’s humble beginnings and give fly-on-the-wall access to the dev team’s conversations, debates, failed experiments, and internal pressures. Licensed by Blizzard Entertainment, it contains over 130 behind-the-scenes images (many of which have never been seen before). Every image is captioned and dated within the project's timeline.


Although the book has been licensed by Blizzard, I didn’t write it like the average promotional merchandise, or the typical art folio brimming with gorgeous concept sketches. I am celebrating computer game development's chaotic, humorous, and ugly side. I covered the people and philosophies behind the curtain. This book is for you if you’ve ever wanted to know the ingredients inside Blizzard’s secret sauce.


I served on World of Warcraft for over 10 years. On the original product, I worked longer hours than anyone on the team. My ears were so low to the ground, my officemates and I played a game where they'd try to surprise me with recently heard gossip—and I took great delight in informing them that I’d heard it weeks before. When I left the WoW team, I had logged more bug fixes than anyone else in the company (Mike Morhaime joked that I’d probably caused more bugs).


I was the WoW team’s first level designer and spent ten years on the project. I designed and built half of Vanilla WoW’s instanced dungeons and 90 percent of its non-instanced dungeons. Working at Blizzard, dispelled so many of my misconceptions about the games industry that I thought a development diary would be a compelling subject to cover. Most companies give only a short, vague idea of how games are made. I wanted to give an on-the-ground report about the devs. I wrote about our teams’ complaints, moods, arguments, and inside jokes.

Each copy of the WoW Diary comes with a 70-page Post-Mortem booklet of essays expanding on philosophies covered in The WoW Diary. This will not be available anywhere else.


The companion book contains four postmortem articles about WoW’s post-launch woes and triumphs. The new material covers philosophies I learned at Blizzard that didn’t belong in the original book. The new articles include advice to aspiring developers and thoughts about success in the entertainment industry. The companion book is one-fifth the size of The WoW Diary. The WoW Diary Post-Mortem Booklet will not be available online or in stores.


I printed this book once. Why print it again?

In short, I am out of copies. With four more years of writing experience, I’m cleaning up the first edition’s weak verbs, passive voice, and typos. The content between the first and second editions is identical, but I’m doubling the size of the companion booklet and including one with every copy of the WoW Diary on this campaign.

I’m partnering with Nolan Nasser and Source Point Press, an experienced distributor who can get copies into your hands better than I can. Nolan is a rabid Blizzard fan, and he painted an excellent desk mat, which we’ll make exclusive to The WoW Diary’s second-edition backers.


The money will support printing, binding, packaging, and shipping. This time around, the additional funds will go towards supporting a print run for mass-market! The plan is to get the book into the hands of as many WoW Lovers and aspiring game developers as possible and we can only do that through mass production and distribution to bookstores worldwide.

So, what can I spend my DKP on here?

Backers who backed the original campaign will automatically have the deskmat added to their pledge after the campaign. For backers from the first campaign that would also like an updated version of the book, you can add one on at checkout for only $30!

What Are People Saying About WoW Diary?

"This book is an unprecedented inside look into Blizzard’s development process that many never thought we’d see."