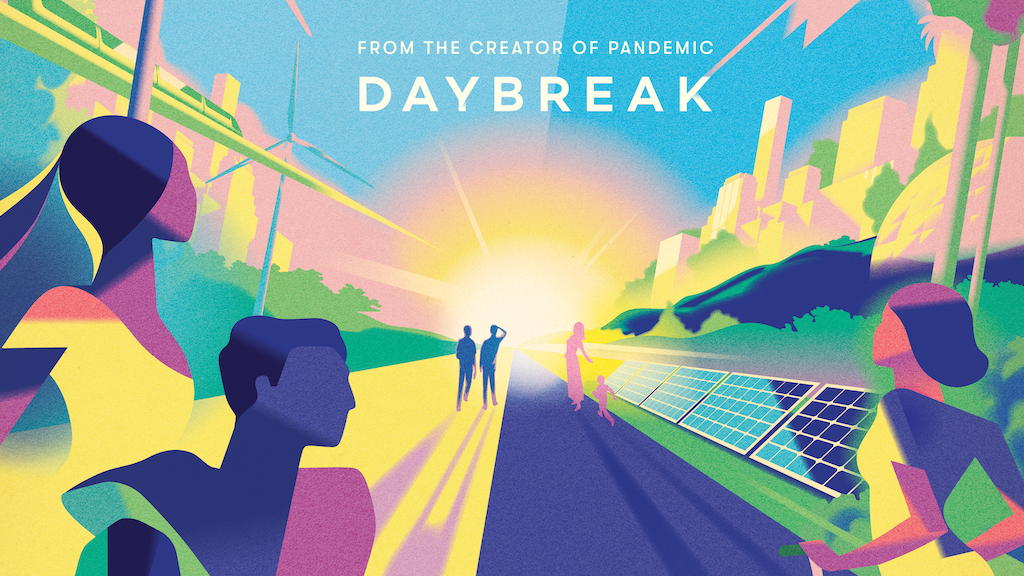 A cooperative boardgame about stopping climate change, from the creator of Pandemic.

Daybreak is a cooperative boardgame about stopping climate change. It is an unapologetically hopeful vision of the near future, where you and your friends get to build the mind-blowing technologies and resilient societies we need to save the planet.

The game is designed by Matt Leacock, the creator of Pandemic (the most successful cooperative game in history), and Matteo Menapace, a designer and educator specializing in cooperative play. And it’s being developed and published by CMYK, who created two of the most acclaimed party games of all time, Wavelength and Monikers.
Inspired by our love of games like Wingspan, Terraforming Mars, and Race for the Galaxy, we set out to design a game that uses that style of gameplay (engine building) to tell an uplifting story about decarbonizing the world—one where all of us can not just survive, but thrive.


Daybreak is absolutely stuffed with sustainable components and hundreds of original illustrations that portray a richly detailed world of international cooperation, mutual aid, and abundance.

And for the duration of this campaign, we're donating $1 per backer to leading environmental and climate justice nonprofit organizations.

Daybreak is a 100% cooperative game, where you and your friends will puzzle over tense decisions, celebrate memorable wins, and lament narrow losses. And if you're anything like us, you'll be standing around the board, talking and strategizing, long after the game is over.

Each player takes the role of a different world power—China, Europe, United States, and the Majority World—with a simple collective goal: reach zero emissions before you hit 2°C warming or put too many of your communities in crisis.

At the beginning of the game, all of you are churning out massive amounts of these carbon cubes:
Some of these cubes are sequestered by forests and oceans.

But like real life, you're all emitting way more carbon than the planet can handle. And those excess cubes go directly onto a thermometer that tracks global temperature rise.

For each 0.1° temperature band you add, you'll have to flip more Crisis Cards, all of which are based off of the actual damages of climate change.

The way you stop all this: remove dirty energy and polluting industries from your player board!

Each player board is slightly different, so the U.S. has to deal with massive transportation emissions, but the Majority World has the different challenge of increasing energy demands as their economies grow.


How do you decarbonize while protecting your communities? Each round you’re going to be drawing from a HUGE deck of unique cards filled with wildly different, powerful actions.

This card play is the engine that powers the fun of Daybreak. Matt and Matteo have created an elegant and simple system, where despite there being 150+ unique cards, you only ever have a handful of potential actions you can take, so you never get overwhelmed.

Instead, you'll be stacking cards with similar tags on top of each other to create powerful combos.

So do you power up an existing action, or pave over it with something new? Do you revive Europe’s nuclear industry or double down on reforestation? Do you focus on creating walkable cities, or use those tags to electrify everything instead?
Decisions like these are the core of Daybreak!

If you want to dive deeper into the rules, here's a video of Matt giving an extensive overview of the rules:

And featuring art from:

Daybreak won't include ANY plastics. Not even shrink wrap or baggies: instead, our storage trays will be made from eco friendly pulp, and our packaging will seal with alternative materials that are biodegradable.


Cottons and other conventionally grown fabrics require high amounts of water, contribute to soil degradation, and use harmful pesticides. So cloth bags and anything like that are out. We even had to change part of the game's design in order to accomplish this!


Our wood and paper components will be FSC certified, meaning that they will come from responsibly managed forests that provide environmental, social and economic benefit. And will be harvested in such a way to guarantee they will grow back.


Any of the techniques or products we develop to improve sustainability will be available for ANYONE to use. Even the molds we're planning to create with will be free for anyone else working with our manufacturer to use in perpetuity.

Our manufacturer, Panda, is an industry leader in making the tabletop gaming industry more environmental friendly. We trust them to help us push the industry toward more sustainable manufacturing. And to accomplish all this, we're working with a sustainability consultant, Ruth Meza, to make sure we're making the best decisions we can.

How to Save the Planet in Less Than Two Hours


His Game Made Beating a Pandemic Fun. Can He Do It for Climate Change?

Pandemic creator’s new board game, Daybreak, is about climate change


Pandemic’s creator is making a board game about climate change

We'll be charging shipping in the Pledge Manager after the campaign, closer to the ship date. We're going to try as hard as we can to keep prices low, and CMYK will subsidize the cost as much as we can.

It will definitely be a "normal" shipping rate and not something shocking, we promise. For example, shipping to the US will be $10 or less. And shipping to Canada will be in the $15-$20 range.

All shipments to the EU, UK, Canada, and Australia will include VAT and customs, so there will be no hidden charges.

And finally, if despite all that, the shipping ends up being too much for you, you can just let us know then and we'll cancel your pledge.

Daybreak's design is 100% complete and deeply playtested. We're now putting the final touches onto the game: finishing the art, board designs, etc. And once we're funded, we'll be able to start production.


CMYK has shipped hundreds of thousands of games to folks all around the world, so we feel confident that we'll be able to get copies delivered on this timeline.

We can't wait to get Daybreak to you!