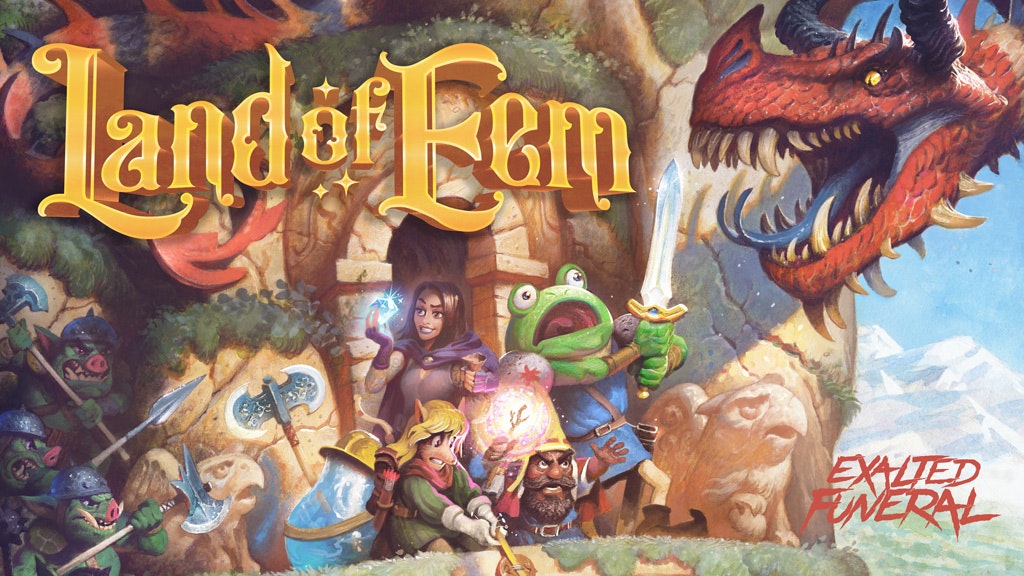 The Lord of the Rings meets The Muppets in this lighthearted fantasy tabletop roleplaying game! Land of Eem is packed with simple rules and resources that encourage players to be creative and make GMing easy.

Pre-order Store Now Open!
This is a Tabletop Games project.

Backerkit Pledge Manager for backers has been sent out to everyone! Not a backer?? Check out the Pre-Order store for new customers!

Journey into the Land of Eem!

The Lord of the Rings meets The Muppets in this lighthearted fantasy tabletop roleplaying game!


Follow the campaign's progress below, including the latest unlocked and announced stretch goals, details about the game, add-ons, and more!!

What Is Land of Eem?


Land of Eem is a game about adventurers exploring and discovering the remnants of a forgotten, better age. Players portray lore-seeking travelers, fortune-seeking pioneers and adventure-seeking heroes in a time devoid of them.


But for all its post-apocalyptic doom and gloom, Land of Eem is a lighthearted game with a sense of humor.  Set in the world of our two fantasy series Rickety Stitch and the Gelatinous Goo and Dungeoneer Adventures, the game combines Lord of the Rings high fantasy epicness with a heavy dose of Muppets-like whimsy and a dash of Mad Max dystopia.


Together with Exalted Funeral, we're launching the Core Rulebook (approx. 200 pages), a Bestiary (approx. 180 pages), and the first Land of Eem Sandbox Campaign Setting: The Mucklands (approx. 400 pages), a realm of 6 unique regions filled to the brim with locations, NPCs, and quests. At the highest reward tiers, all three 8.5" x 11" hardcover books are packaged in a box set, complete with a 22" x 22" foldout Mucklands map gameboard.

Land of Eem is a lighthearted fantasy RPG presented in an easy to use, easy to learn Core Rulebook (approx. 200 pages) that contains everything you need to begin play. It's packed with rules and resources that encourage players to be creative and ease the burden on GMs. Download the Quickstart Guide to get started!

Land of Eem emphasizes player creativity and collaborative storytelling, with character abilities that allow players to invent and shape the world around them. The game is more about roleplaying, teamwork, exploration, and finding lost treasures, than it is about always fighting monsters--though that's definitely part of the game!

Choose from 16 Folk species, in addition to 6 character Classes each with 20 unique Abilities.

Explore the Land of Eem with robust travel rules that will take characters across a beautifully illustrated hex map. Paired with the Mucklands Sandbox, Land of Eem offers player-driven exploration and tons of GM tools that are easy to use.

Characters earn XP not by slaying monsters but by roleplaying, exploring, and engaging with the narrative and game world.

Utilizing the criminally underused D12, Land of Eem’s simple dice mechanic allows for degrees of success and failure. Both the GM and players are encouraged to have input on interpreting the results!

While combat is sometimes avoidable, getting into a scrape or two is inevitable. Combat is quick and decisive, with a frequent counterattack mechanic that simulates duels.

200+ crafting components to find on your travels and use to create unique potions, items, and food.

Land of Eem is a world of hidden magic. Only the Gnome class is inherently magical, but all characters can discover powerful magic items, potions, and scrolls that grant unique Abilities, not just ho-hum stat modifiers.

The Core Rulebook contains 25 adversaries to pit against Land of Eem adventurers, while the Bestiary contains the full 160+ roster of creatures, critters, and creepers.

The Core Rulebook is packed with random tables for GMs to generate flavorful Land of Eem content, with preparation or on the fly.

The Mucklands Sandbox Campaign Setting is an expansive hexcrawl sandbox filled with hundreds of locations, NPCs, quest hooks, and rumors for players to pursue.

Land of Eem is set in the fantasy world of our book series Rickety Stitch and the Gelatinous Goo and Dungeoneer Adventures. But you don’t need to read the books to play! And the Mucklands Sandbox is almost entirely system-neutral, so GMs can use it with any RPG system or simply as inspiration for their own campaigns.

Land of Eem is a world that’s both wacky and wondrous. Embark on adventures that are as silly or as serious as your group prefers! All adventures and quests in Land of Eem are categorized by three different tones:

However you’d like to play, Land of Eem supports it.

Eem is a land of color and wonder, a world with many storied regions and realms teeming with diverse cultures and a plethora of characters and creatures. Eem is also a land in decay, for the great civilizations of the past crumbled long ago at the hands of the mysterious GLOOM KING. Ever since, the world has declined into an untamed, unchecked land filled with all manner of monsters and fiends, fearsome warlords and, most recently, greedy tycoons... ushering in an unruly industrial age called the DUNGEON ERA. A time chaotically run by rival goblin corporations locked in a never-ending quest to outdo one another in business and expansion. All the while, average folk toil away in mines, factories, and dungeons, eking out a meager existence.


The southern realm of Eem and seat of goblin power, known as the MUCKLANDS, is broken into six regions:


The Drippy Downs: One of the few bastions of the old magical world, the Drippy Downs is a land of rolling green hills, home to trolls, faeries, dweorgs and other uncommon species--many doing their best to preserve the heritage of Eem's magical past.

Fleabag County: The bustling region of Fleabag County is home to the Mucklands' biggest cities, including the big crabapple itself--Bogtown. Corrupt politicians and underworld criminals thrive like weeds as average folk toil away in factories and farms.

Quagmash: A wilderness of largely unexplored swamps and bogs where pioneers, adventurers and big game hunters flock to either make names for themselves or succumb to the perilous backwater full of gators, muckmen, and orches.
River Country: A beautiful green country full of rushing waterways, River Country is not only home to peaceful quortles and peasant folk but to wily rascal robbers and obscenely wealthy river barons who endlessly duke it out for supremacy on extravagant riverboats.

Scalawag Strand: The infamous coastline of the Mucklands teems with pirates and rascals out to rob seafarers blind--or worse. And if the pirates aren't enough to deter you from the open seas--beware! For beyond the peaks of Terror Island, there be monsters!
The Used T'Be Forest: Home to the goblin tycoons and corporations that fuel the Dungeon Era, the Used T'Be Forest is a barren landscape of cracked earth and felled trees. A true testament to what happens when big business and small moral fiber make a mess of the natural world.

Land of Eem is chock full of original and classic fantasy foes, each with an unusual spin on traditional tropes. While the core rulebook includes a select handful of adversaries, the Bestiary contains those and many more—all illustrated in full color.

Feel free to upgrade your pledge at any point during the campaign to another pledge level!


If you were a Day 1 Backer, your pledge is always tied to the date and time you initially pledged, so you will still receive the Day 1 incentives for whatever pledge level you decide to stick with, the Resting Lich Shirt and/ or Catypillar Patch!

How and when can I add-on items?
You will receive an email after the campaign ends to collect your address and payment for shipping. This email will link to your BackerKit account and provide access to the add-on store where you can purchase the add-on items at an exclusive backer discount!

In addition to Ben Costa's art, we've assembled an incredible team of artists to bring Land of Eem to life.

If you're interested in joining the conversation, you can find us on a few platforms.

Perception Studios dives into Land of Eem with a cast of delightfully hilarious felted friends!


Experience And Gold podcast embarks on a 10+ episode Land of Eem adventure with hilarious results!

Anticipated fulfillment timeframe is Third Quarter 2023. We will post regular updates on the campaign with manufacturing progress and more specific dates once we secure them from our partners.

US and Remaining Countries

US, Canada, Australia/New Zealand, and all other countries included in the "Rest of World" category will be fulfilled from Exalted Funeral's US warehouse.

What age range is this game suitable for?
Land of Eem is recommended for ages 12 and up, however, younger children can easily play as well with help.

I need assistance with my pledge or have a question about the campaign, who should I contact?
Please reach out with customer service related issues to support@exaltedfuneral.com.

How will I know that I am receiving the Day 1 Freebies?
As long as you pledge before Thursday July 14th at 11:59pm ET then you are all set to receive the Cattypillar Patch or Resting Lich Face, or both depending upon pledge level! You will see your freebies added to your pledge when you receive your post campaign BackerKit survey. If you have any questions please contact support@exaltedfuneral.com.
If I switch my pledge level, will I loose my Day 1 Freebies?
No! Your pledge is always tied to the date and time you initially pledged, so your Resting Lich Shirt and/ or Catypillar Patch are SAFE! Feel free to upgrade your pledge at any point during the campaign to another pledge level AND keep your Day 1 Freebies!

How and when can I add-on items?
You will receive an email after the campaign ends to collect your address and payment for shipping. This email will link to your BackerKit account and provide access to the add-on store where you can purchase the add-on items at an exclusive backer discount!

What is the estimated fulfillment date?
Anticipated fulfillment timeframe is Third Quarter 2023. We will post regular updates on the campaign with manufacturing progress and more specific dates once we secure them from our partners.

Is shipping included in the price of the pledge tiers?
No, shipping will be collected via the survey you will be sent from BackerKit via email several weeks after the campaign ends.

I'm so excited about this game and would love to send one to a friend! Can I pledge for multiple tiers and have them shipped to separate addresses?
Unfortunately, you can only pledge for one tier per account and all items in the pledge associated with that account will ship at once to the one address provided. Additional copies of the game and all of the add-on items will be available for you to purchase for gifts in the add-on store post campaign.  If you would still like a pledge to ship directly to a friend or family member, you can pledge under a separate account and purchase another tier to be sent to their separate address.

How and when will the digital files be delivered?
The digital files will be delivered via Backerkit and the website Drive Thru RPG.
Why two places?
Many gamers like to have their digital files collected in one place and Drive Thru RPG provides a great resource for that!
For Backerkit you will receive an update in the same BackerKit account you access post campaign to provide your shipping and add-on purchases when the file is available. This will happen after all orders are locked and payment has been collected.
For Drive Thru RPG, you will receive an email when the files have been uploaded. Digital fulfillment will begin before physical fulfillment and we will post an update in the campaign with a timeline once those files are complete.

I am a retailer and have a question about my pledge.
Please reach out to our Wholesale Manager at wholesale@exaltedfuneral.com for retailer related questions.