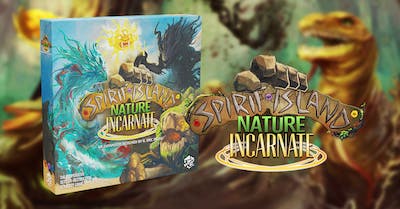 The Path Going Forward
38
4 months ago
by Greater Than Games
Good morning, everyone!

There have been wrinkles and hiccups, but what a fantastic first week we've had overall! Thank you to each and every one of you for being a part of this, and also for sharing your feedback — we want this experience to be the best it can be for as many people as possible! Let's get into it!

First, let's talk about what the rest of this campaign will look like. We're going to go to our tried-and-true method of regular Monday-Wednesday-Friday updates with planned content. Here's what you can look forward to in the coming weeks:

I've lightly redacted the names of the Spirits so you can have SOME guesses as to what is coming, but still have plenty of content to look forward to. Trust me: there will be plenty of surprises along the way. Speaking of which...

To kick us off, we passed the 7000 backers count last night, so here's one of the Unique Power cards for Ember-Eyed Behemoth:

As you've figured out from Behemoth's Spirit panel, they're all about stompy destruction, but they have some other tools, as well. Terrifying Rampage uses their stomping to keep some Invaders out of the fight, and also to make Dahan flee, but in potentially useful ways!

Let's see how many more Achievements we reach by the end of the campaign!

One of the things we've heard from some of you is that you do not want the Foil Spirit Panels at all. On the other hand, many folks DO want the Foil Spirit Panels and are excited about them! We already have a plan to produce them (and we are also working with a new printer on making them lighter, brighter, and more easy to read and use), so we WILL be making them as part of this campaign, but we are also offering a way to opt out of receiving them if you absolutely do not want them. There is an Add-On for $0 named "No Foils, Please" which you can select as part of the backing process. Doing so (and then confirming it during the post-campaign pledge manager later on) will mean that when we ship you your Nature Incarnate rewards, we will NOT ship any Foil Cards with it. Entirely up to you! This will be an additional logistics puzzle for us to solve during our packing and shipping process, but we're willing to take that on and make this work in order to give people the options they want. We hope this helps!

As for making thin, non-foil Spirit Panels, which is a thing some people have requested — we're looking into it, and it's a thing we might do some day in a big bundle with potential art or graphic design tweaks, but it's not something we're doing as part of this campaign, and it will take a good deal more consideration on how we'd want to make that as a product. But know that we do hear your requests and we are looking into the best way to make such things available!

Not to leave you hanging here with mostly business and very little fun, we wanted to also use this update to share information on a largely lambasted Blight Card: Tipping Point.

As part of Nature Incarnate rules, we're officially retiring the Blight card Tipping Point. Tipping Point had the unfortunate effect of particularly punishing Spirits that might be low on presence for some reason (eg. Volcano, Sharp Fangs, Fractured Days) while having almost no effect on most other Spirits.  When there were fairly few Blight Cards, Presence-low Spirits would need to play around it, but as more Blight Cards are added, that stops making any sense, turning it into a low-odds 'you just lose' effect. This constrained our ability to make more Spirits without much presence on the board, and those Spirits are more fun than Tipping Point is. Plus, there have been a number of "unfun" feelings about Tipping Point since its release, so we are taking this opportunity to give some new, better options that still keeps the danger high while not constraining design space or game enjoyment. We'll be sharing a few of the new Nature Incarnate Blight cards in future updates.

I believe that's everything! Whew! I'll be posting another update with today's Spirit Reveal in under an hour here, as I didn't want all this information to clog up the Spirit reveal update, so stay tuned for that!
Log in to join the discussion
Top Comments New Comments
38 comments
Back It