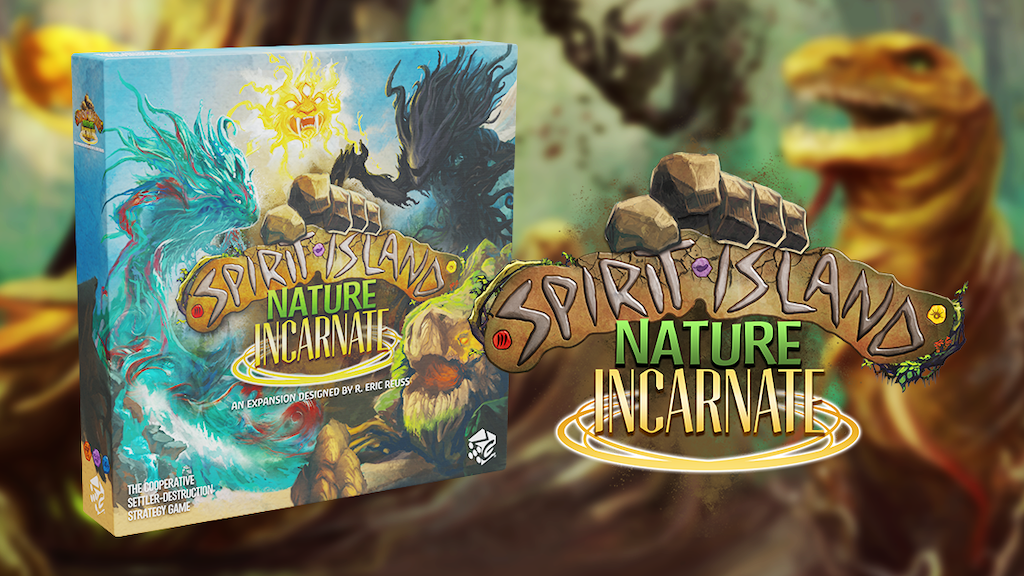 The next expansion of the award winning settler destruction game, Spirit Island: Nature Incarnate brings the fight to the Invaders with new spirits, mechanics, and more.

Pre-Order Here!
This is a Tabletop Games project.

Face the Spirits of Nature Incarnate

Since time untold, Spirits have existed on the Island. There are Spirits whose names are known by the local Dahan people — Spirits of growth and fire, of strength and river. But these are not the only Spirits… Legends whispered on the rarest of days tell stories of Spirits from the deepest, furthest reaches of the land. Powerful forces of nature that have not been witnessed in ages.
Until now…


When white-sailed ships reach our coastal waters, when would-be colonizers step foot onto the unblighted shores, when they raise blade and plow to claim the land with greed and hunger, nature stirs. When Invaders strike out at the heart of the Island, they draw the attention of Spirits of myth and legend and face power unimaginable.

This time, they learn to fear Nature Incarnate.

What Is Spirit Island?

Spirit Island is the award-winning cooperative, settler destruction strategy game. Players take the roles of powerful spirits, working together to defend their island from colonizing invaders who spread Blight and destruction wherever they go. Here’s a great video on everything you need to know on Spirit Island from The Broken Meeple in 2021!

What is Nature Incarnate?

But first, let’s explore the centerpiece of Nature Incarnate: a new Spirit mechanic called Incarna.
An Incarna is the powerful manifestation of a Spirit that has taken form in the physical world. It acts as a special Presence token, placing the Spirit on the board like never before.

Incarna Spirits manifest in a variety of ways, from a massive titan that destroys everything in its path, to a mighty tree that defends the land and quiets all conflict around it, to a shadowy figure that slinks through the darkness and sends lone Invaders to the Void.
Four Spirits in Nature Incarnate have their own unique Incarna token, bringing this new mechanic to life at your table. The other four Spirits operate in a more familiar fashion, but range in approach from carving swathes of overwhelming destruction, to the protection of hearth and home, to a Spirit who starts the game dying and must find their way to a new form.

For more information on how this campaign is being run and on the Achievements system, check out this update.

Note that Spirit Island: Nature Incarnate requires both the core game and the Jagged Earth expansion to play.

In this campaign, we have pledge levels ranging from just Nature Incarnate to several bundle packages including games, expansions, sleeves, tokens, and more!

To pledge on this campaign, click the “Pledges” tab at the top of the page to check out each of the levels!

Want to add more to your pledge? Each pledge level is available as a bundle that you can add-on to whatever level you pledge at! These bundles are available during the campaign, and will also be available after the campaign as part of the pledge manager.

As explained in this update, you can also Add-On individual items, and they'll be shipped separately before your Nature Incarnate pledge.

Additionally, if you're outside the US, you can add on Horizons of the Spirit Island!

That's right. All non-US backers may Add-On a copy of Horizons of Spirit Island! Currently, this is still a Target exclusive here in the US. Sorry, US backers, but your access to Horizons should only be impeded by Target's ability to ship to you or you getting to a Target shelf! US Backers, be sure to check out your options at Target.com here. If you are a backer in the United States, you'll still see this Add-On as an option, but during the post-campaign pledge manager process, when you put your address in, it won't let you get the rewards associated with this Add-On. So, please do not select this Add-On if you are a US backer — just go to Target.


We’ve conducted shipping in a variety of different ways over the course of the many crowdfunding campaigns we’ve run in the last decade, some more successful than others. The goal of any shipping system is to 1) get the games to all of you delightful backers, and 2) be as little of a headache as possible to everyone involved. We’ve got a great track record on #1, and a semi-decent track record on #2. Point being, we’re going to do things a little differently this time to try to make things go smoothly, around the world.

We’ll be charging shipping after the conclusion of this campaign in the Pledge Manager. This will allow us to make sure everyone’s shipping costs are as low as possible, while also covering any extra weird charges and prevent additional costs on either end.

However, the biggest change this time around is that, for the first time in quite a while, we will be using multiple fulfillment houses for this campaign. Since the acquisition of Greater Than Games by Flat River Group, Flat River Group has also acquired Synapses Games, which just so happens to have all of the necessary tax and business registrations to do business in Europe. They also have access to a warehouse in Belgium! To make a long, complicated, and boring story short, this means that we can ship full containers to Europe just as we do to the US and then have them fulfilled locally.

For backers in the United States: We will charge you sales tax if you live in any of the states where Flat River Group has a warehouse (Missouri, Illinois, and Michigan).

For backers in Zone A: VAT/GST and import fees are included in the shipping cost estimates quoted above and will be charged in the pledge manager at the same time as shipping. For EU 27 backers, your products will ship from within the EU and not be subject to any fees on delivery. For Canada, we will mark all labels as "bill taxes and duties to shipper", which means that FedEx should bill us. However, in our experience, FedEx will mess that up for some of the shipments - if that happens, just reach out to us and we'll refund you any fees. Finally, we don't believe that there will be any fees for the non-EU, non-Canada backers in Zone A, but if there are, we'll refund you.

For backers in Zone B and Zone C: You may have customs charges on import that you will be responsible for paying - it depends on your local laws and regulations.

Finally, unfortunately, there are a small number of countries to which it is impossible for us to ship. If your shipping address is in such a "Forbidden Zone" country we will be forced to cancel and refund your pledge. We wish we could send games everywhere, but it’s not always possible. The current list of “Forbidden” countries is: Belarus, Brazil, Cuba, North Korea, Russia, Syria, Venezuela, Yemen, and Antarctica (which isn't technically a country, but is certainly a place to which we cannot ship). We hope the list doesn’t grow any more, but if it does, we’ll update it here.

Ultimately, our goal is to make great games and send them to whoever wants them. The shipping system we’re using with this campaign should be able to do that in the most fair, equitable, and cost-efficient manner for both you, our favorite backers, and us. If you don’t feel comfortable with this system but still want to get the game, it will hopefully be available at game stores after the campaign has been fully fulfilled.

Thank you, again, for supporting our projects.

From All of Us to All of You


We wanted to thank you all so much for reading all the way through to the bottom! Stay tuned for updates to know all there is about Spirit Island: Nature Incarnate.