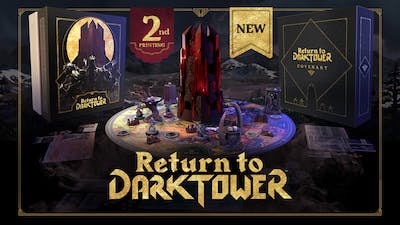 Let's start with the big goal we just hit: $1 million dollars. On a new platform, for a second printing, that's a huge achievement. It's a testament to the effort of all of the folks who contributed to making this game, the amazing support and work by the BackerKit team, and, of course, our amazing fans. Thank you so much for making this happen. While we're on the subject of goals....

When we were designing Covenant, we noticed that some of the Main Goals didn’t work as well with this expansion. Some were confusing or required exceptions; some where effectively impossible. Rather than just tweaking a few, we took it as a sign from the Gods of Light that we should just do them all. So we set about writing all new Main Goals when playing with the Covenant expansion.


Important caveat: These are in early development, and we are just starting to test them (since they require a new test version of the app). It's likely that a few will change, but here’s the "elevator pitch" for the new main goals as they are now:
Gleb - Gleb the Outlaw King suggests finding his former allies. "They like to be on the move so you'll have to know where and when to find them." (Gleb will not be a companion at the start of the game).
Grigor - Grigor the Unbreakable suggests defeating the Tower's champion. Destroy the adversary's most powerful minion to lure them out of the Tower.
Hakan - The Tower is protected by a spectral spirit that haunts a lost tomb. Building monuments will help Hakan triangulate the tomb's location. Build three monuments to reveal the secret dungeon, then complete it!
Letha - Letha the Dryad thinks if we do not merely halt the wastes but reclaim them, the tower will open. Complete a monument and reseed the wastelands in that kingdom with siege trees.
Miras - Miras tells you "The Adversary has wards that make it hard to attack them. Our advantages won't work. We're going to have to do this the traditional way - with strong arms and boots on the ground. Station your warriors strategically about the kingdoms. I'll summon the Adversary when you're ready."
Tomas - Tomas has collected Gems of Power and tries to ferry them hidden among ordinary caravans. Guide these caravans to their villages to activate the gems.
Vasa - Vasa The Divine communes with the gods of light, but they are limited in their influence. Complete all monuments to return the gods to their glory so they can smite the Tower.
Yana - Yana tells you that the Adversary has grown too reliant on its foes. If you defeat 10 foes, the Adversary will have no choice but to leave the Tower. (Yana will not be a companion at the start of the game.)
Zaida - Zaida speaks to you in a dream. Spend treasures that match the adversary’s traits to work a spell to draw the Adversary out.

As you can see, with this batch of main goals, we're really trying to push the envelope of what they can look like and offer a wide variety of objectives to test your mettle. So, which one's the first one you're going to try out?
Log in to join the discussion

For the collect the three keys main goal idea, why can't it be a cooperative goal? Tomas already has the three dungeon main goal. Can't something like that be done with the keys, which would be followed up with riddle of the keys type quest to bring out the adversary?

Can we please have a main goal of getting three keys, and storming the tower? For old time's sake? Please?

Well... Justin had said we'd be excited about the app update. After conversing with him via email I think that's with a grain of salt. The game focuses more heavily of cooperative play than on competitive play (which was the original game's only mode). Recently I ran a tournament and everyone said basically the same thing, They loved competitive play but wanted to see it expanded. The app updates are not, at this point, going to expand competitive play. If an Activate Tower button were added players could write their own scenarios and that one button would prevent the app from ever being outdated. It would allow GMs to design competitive scenarios and open whole worlds. So if we're not getting the needed boost to competitive play then at least give us the "Activate Tower" button. So Steph, I doubt you'll see a main goal update like that since it would focus on Competitive Play and that's not something Restoration is pursuing at this time. I agree with you. We need to expand the competitive play. - Karl

Well... Justin had said we'd be excited about the app update. After conversing with him via email I think that's with a grain of salt. The game focuses more heavily of cooperative play than on competative play (which was the original game's only mode). Recently I ran a tournament and everyone said basicalky the same thing, They loved competative play but wanted to see it expanded. The app updates are not, at this point, going to expand competative play. If an Activate Tower button were added players could write their own scenarios and that one button would prevent the app from ever being outdated. It would allow GMs to design competative scenarios and open whole worlds. So if we're not getting the needed boost to competative play then at least give us the "Activate Tower" button. - Karl

Ever given any thought to making some of the expansion components selectable? Wanting to play with monuments and doom skulls but not wastelands, select a custom campaign at the start and choose from a list of “features” you want to play with. This could also work with the new campaign’s to give even more options for running a base game and changing just the campaign goals.

Seriously. I don’t see the point playing monuments without wastelands. Their game mechanics are deeply linked to each other. Balancing each other. Skipping wastelands while playing monuments will precisely make the game too easy and unchallengeful. Same about « à la carte » features. Most exp features are connected and balanced with others features inside the same specific modular expansions. Altering that would damage the difficulty balance of the game itself. That’s also why I don’t imagine playing both monuments and guilds in the same game. But you have heroes ! Covenant heroes can be played with the guild expansion or the core game alone. Heroes are interchangeable. And with the actual range of heroes, foes, goals and adversaries (which all can be played with whatever expansion or not), you have enough combinations to renew your pleasure.

will we have new missions and new enemies? or that is for another expansion .....

Not a fan of game expansions that don't work well with each other. Still planning on keeping my pledge for now though. Congrats on passing 1 million!

The heroes, corruptions, and most of the treasure can be used in any mode. By limiting the scope of the monuments/doom skulls mechanic, we are better able to tune it. That way it can keep it's flavor and be a more interesting play experience. The down side of trying to fit every new mechanic in with every other is that you will end up with problematic interactions that require rules exceptions or that you water down the mechanic so much it become uninteresting.

Will it be possible to add the power skulls when playing with monuments? (I know I can still add them by myself but I mean with the app telling you how many and which type to put depending on foes)

This is great. It continues the adventure with our favorite companions and gives them new adventures within the Covenant expansion. I think this is a much better option than just adding "more." I like having a variety of individuals, but this continues to deepen the bonds we've made with them since the core game. I'm curious if this will mean the introduction of a few new Quest Cards, or if design will strictly be without them (I'm guessing the latter).

I assume you're referring to quest items. No plans for that, but it is on the table if we feel like it's relevant as we continue playtesting.

Love the idea! it's a great idea! Just a quick suggestion - how about add it with new companions? I.e. keep the old but add the new... it would make it easy for the original game to still work and allow you print new cards with the new goals. (I suggest this cause I love the cards with the goals on them, and I would want new printing of the companion cards to see the new goals)

I would definitely love to see 9 new cards for these goals. We actually use these cards more as a reference than the app because they easier to pass around.

I'm also in the camp of those who would like to see the app allow for more granular mixing of the expansions. A tab with check boxes for specific elements would work nicely. And if that requires more work than the scope of this fundraising round, perhaps another expension down the line could include that? Something with new foes and adversaries?

I should have been more specific about what I was referring to: quests and goals assigned based on companions and adversary. Also, while I haven't had the opportunity to get into the alliances expansion quite yet, it seems like the druid faction would have a vested interest in seeing the Argent Oak completed. Things like that would make for endless experiences (at least at the rate that I get to play).

Really pleased we're switching up the goals for everyone. Will feel like a brand new game.