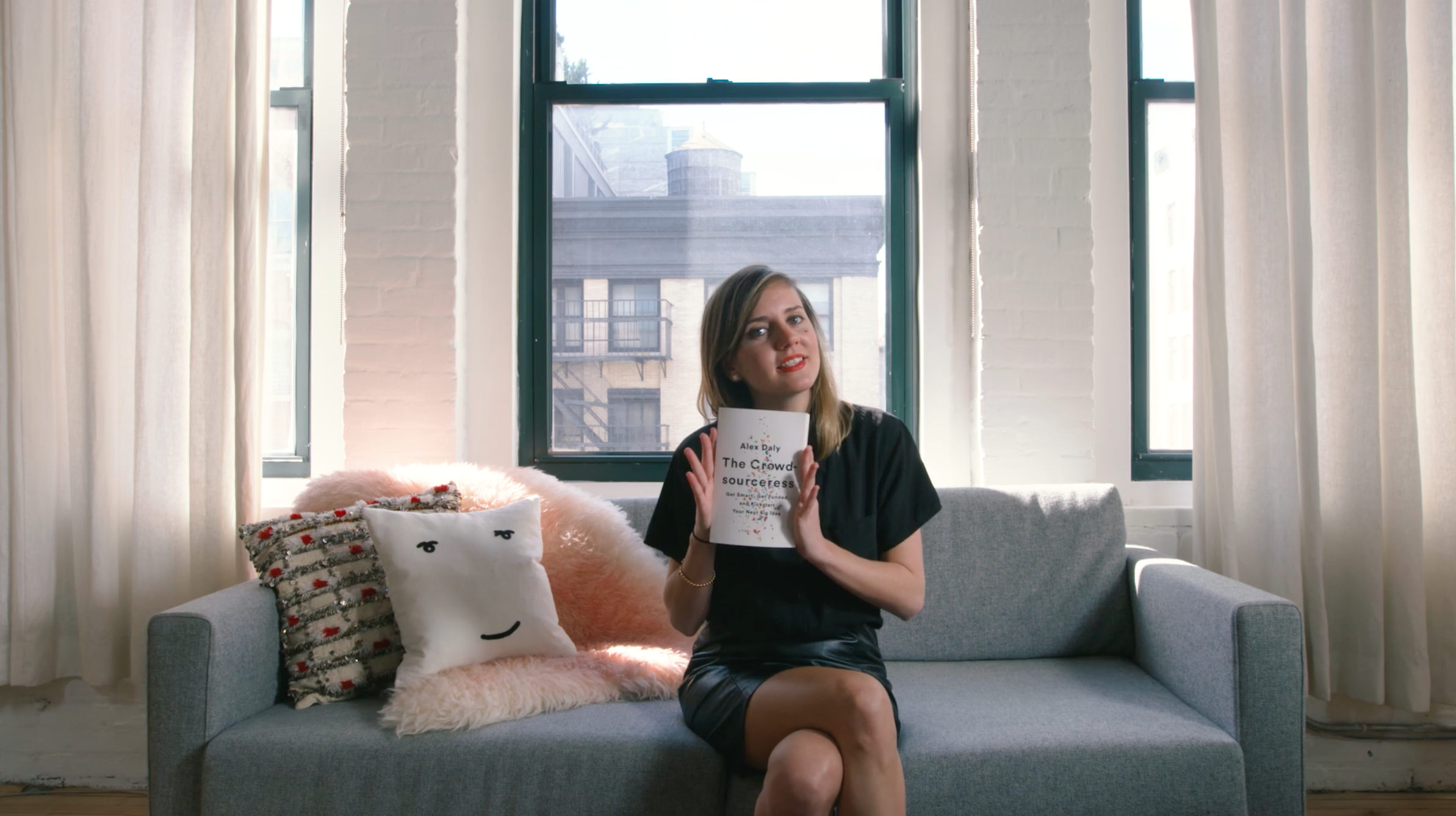 An Afternoon with Alex Daly, the Crowdsourceress

Today BackerKit had the pleasure of attending an enlivening talk delivered by Alexandra Daly, a mover-and-shaker in the crowdfunding space, at WeWork in San Francisco’s Civic Center.

New York-based Daly is the founder of Vann Alexandra, a creative services and PR agency that specializes in launching and promoting crowdfunding campaigns for creatives. She’s also the author of The Crowdsourceress: Get Smart, Get Funded, and Kickstart Your Next Big Idea, recently released through Public Affairs and available for purchase on Amazon.

Daly has presided over some of Kickstarter’s biggest projects: Neil Young’s PonoMusic audio player, TLC’s final album, and documentaries chronicling the lives of Maya Angelou and Joan Didion, to name a few. Two of her campaigns are currently live: a reissue of the Graphics Standards Manual and a social enterprise that empowers and employs Syrian refugees through the creation of traditional crafts.

Daly has launched and promoted 50 campaigns and raised over $20 million and counting. To say she’s an expert is an understatement. She gave the audience a teaser of her just-launched book, spoke about the trajectory that led her to crowdfunding, and shared her insights on the secrets to a successful crowdfunding campaign. 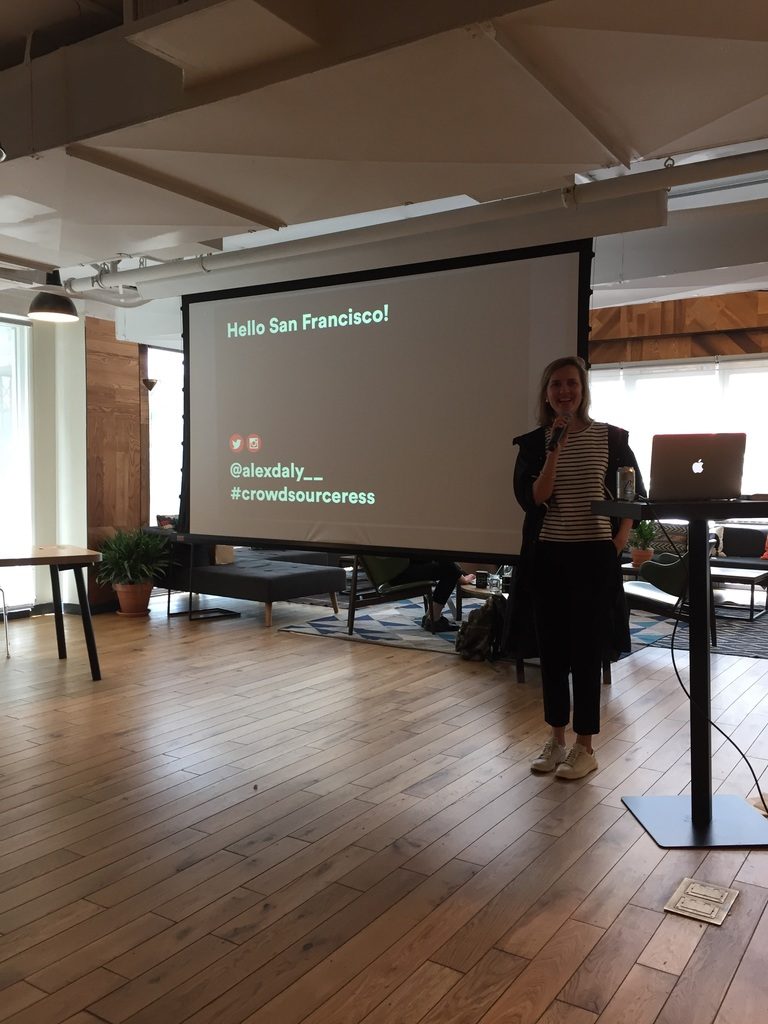 Here are some of the key takeaways from her talk.

The Most Crucial Marketing Strategies

For Daly, press mentions are integral to driving publicity and interest in a crowdfunding campaign. She advises against a scattershot approach and suggests targeting publications that suit your product’s niche.

“The press packs a powerful punch,” she says. “If you have a design product, you think of Wired, Fast Company, Design Milk, design blogs, that kind of thing. If you’re doing a tech product, you think of Techcrunch, Wired, Venture Beat. You have to pitch the press with the audience of people that will be interested in your product.”

Developing a social media presence is also essential, but there are limitations to each platform. ‘When you’re dealing with Twitter, it’s much more contained in 140 characters, and then the tweet disappears very quickly,” she says. On the other hand, she strongly recommends Facebook advertisements to give stagnant campaigns a nudge.

“There’s the valley-of-death plateau in those middle two weeks where nobody is buying the product. Facebook advertising gives it a big bump.”

Then, of course, there’s the project page itself, which requires “a lot of marketing thought”. Daly reiterates the importance of  “a stellar video, a beautiful campaign, and rewards that people want to get”.

Daly offers some general rules to engage your backers: keep the copy short and succinct, and make sure the video runs for a few minutes. Unless, of course, you’re Neil Young: then you can have an 11-minute promotional campaign video featuring the likes of Patti Smith, Arcade Fire, and Anthony Kiedis.

How Crowdfunding has Changed

Crowdfunding has been around for less than 10 years, but it has undergone a rapid evolution in that time. In the early days, Kickstarter was a platform for indie artists and creatives. But today, as the crowdfunding economy has grown and become more mainstream, the ambitions of creators have shifted.

Every Campaign Needs a Story – and a Crowd

Some of Daly’s campaigns have harnessed star power to gain press attention. But how do projects without a celebrity figurehead nab the attention of time-poor journalists?

“The press is very fatigued and tired when it comes to writing about Kickstarter campaigns because sometimes, they fail,” she says. So rather than focus on the campaign or the product, she suggests shifting the emphasis on the story behind it.  “What we do is sell the story behind the product. When you give journalists a good story on a silver platter, then they write about it,” she says.

“It doesn’t have to be a celebrity for it to be special. It’s the story of why this product is so relevant right now and why it’s so awesome.”

That said, a campaign is nothing without a crowd. To Daly, this is the “most important thing”. And while it’s true that celebrities or popular institutions have an easy-to-access fanbase, she says even the most niche products can build a following, or an “in-built audience” – the trick is to find them.

“A built-in audience is a group of people that are inherently in love with the subject matter of your product – it can be your mailing list, your social media followers, your fanbase,” she says. What’s more, finding this audience takes time and effort – you’re unlikely to find your niche overnight. But, as Daly says, it’s worth it.

“When clients come to me and say, ‘We have a great idea’, I say: ‘Have you built a mailing list? Have you built a social media following? Have you gotten people excited about this? If not, go do that for six months and then we can talk. If you launch something without an audience ready to go, it’s going to fall flat’.”