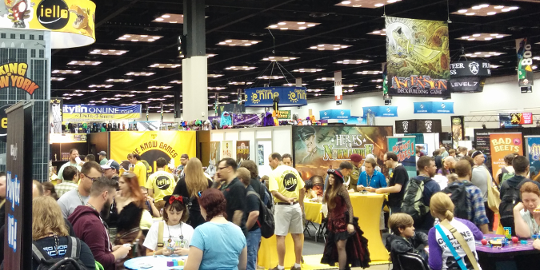 We’ve returned from our extended weekend at GenCon 2015 where 61,423 passionate tabletop game fans gathered together in Indianapolis, Indiana to see, play, and buy all sorts of games and gaming related merchandise.

Meeting with our customers was a great experience. You can get a lot of work done through email and over the phone but being able to shake hands and speak with our customers face to face was invaluable. We could speak frankly, joke around, and talk about subjects, small and large, that never made it into an email.

We spent the entire show talking with project creators about their current challenges and upcoming projects. It felt awesome to come through with solutions on the spot, helping one creator troubleshoot a Dymo label printer problem for example. We were surprised that the most common reaction we received from customers was appreciation–they wanted to thank us for making their lives easier and we welcomed every single hug that we received!

We were also grateful for getting the opportunity to speak with the handful of customers that weren’t as happy with us. We lucked out that most of the problems had easy fixes but it is troubling that we didn’t discover that these customers were unhappy until we spoke with them in person.

We were able to achieve our goal and meet with almost all of our customers as well as several new potential customers during the convention. Now, to follow Jamey Stegmaier’s example, here are a few lessons that we learned from our first GenCon.

We spent an entire day traveling and didn’t get into Indianapolis until the night before we had our first day of meetings. The travel weariness and jet-lag had us in the hole even before we spoke to a single project creator. Next time we’ll aim to get in earlier to make sure that everyone is at full strength going into the start of the show. We’ll also get a hotel closer to the convention center to cut down on commute time and give us more time to rest.

We spent our first two days fanning out individually with assigned customer lists and appointments. Pairing up to tag-team customers worked out better. Having an extra pair of eyes helped with locating the customer booth faster and meetings went smoother when one person could talk while the other pulled stickers and t-shirts out of the schwag bag. If there was extended downtime for one person, they could peel off and hit another meeting solo.

Our table was located in the First Exposure Playtest Hall right next to the GenCon entrance. We outfitted the table with a BackerKit branded table-skirt.

It looked great when there only a few people standing in front of the table but our name was totally hidden once more people gathered in front. We will definitely need to get a standing backdrop to get our name and logo up at a higher sightline.

Messaging for the General Public

We manned our table to consult with prospective game creators that wanted to talk about crowdfunding an upcoming project. Our table was located next to a game marketing company and a game manufacturing company so that helped signal to visitors that we were a business that helped game companies, but we still had a steady stream of regular convention-goers asking about BackerKit. We never really developed an easy pitch to explain BackerKit to the layman. It was tough because many people didn’t even know about crowdfunding, so we would have to explain the Kickstarter/Indiegogo crowdfunding concept first and then explain how BackerKit helps project creators automate their campaign fulfillment.

We came to GenCon with a variety of die-cut stickers, buttons, notebooks, and t-shirts to give out to customers. The notebooks turned out to be the biggest hit. They looked great and had a nice heft to them. People liked the stickers but they weren’t practical like the notebooks. The buttons, though not a practical item, were also well-received. If we make t-shirts again, we’d go for darker colors instead of white and focus on the M-L-XL-2XL size range.

It’ll take a few months before we see whether or not our GenCon activity generates any new project creator sign-ups but meeting with all of our existing customers has already made the event a huge success for us. We want to thank all of our tabletop game creators for taking the time to meet with us and see you all next year!