There’s no denying Essen Spiel is the largest gathering of tabletop gaming fans and creators in the world. After scouring hundreds of booths across 6 separate halls last week, I can safely say the tabletop gaming community is absolutely booming!

This year, the BackerKit team collaborated with our friends at Ludi Creations to set up a booth of our own. Over the course of 4 jam-packed days, BackerKit featured 10+ tabletop game creators who all bring their games to life through the power of crowdfunding.

Hanging out with these creators as they demoed their games (some not even out yet!) was an absolute blast. Here’s the lineup we featured this year at Essen Spiel 2018:

It was great seeing Dominations in person for the first time. The art style and colors really pop complimenting the detailed and sturdy game pieces. It was great watching all our booth visitors play, many of which were early adopters during the recent Kickstarter campaign.

You can Pre-Order a copy of Dominations right now! 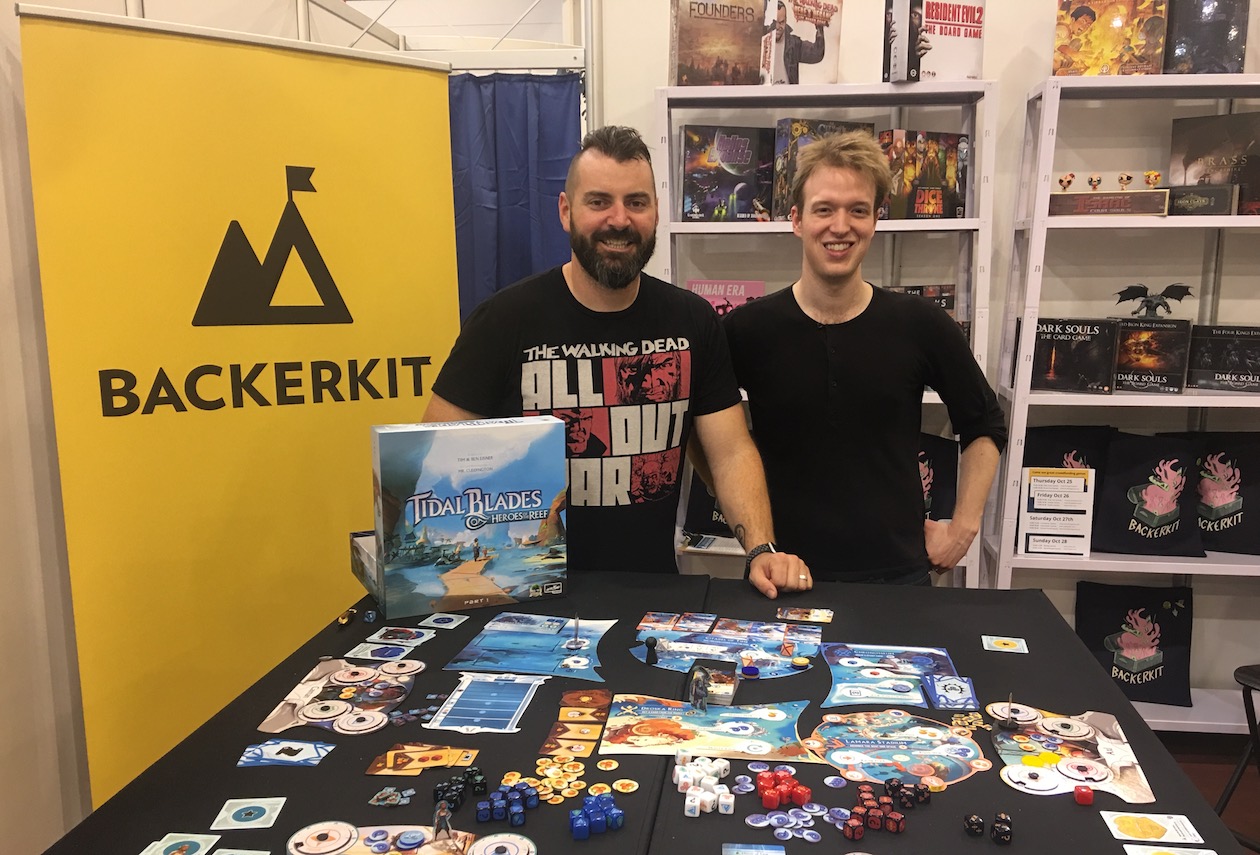 It’s always a blast to hang out with James Hudson from Druid City games. He was demoing his latest game Tidal Blades which is currently being funded via Kickstarter until November 10th, 2018. Why are you still reading this! Go back this project while you can! Also, be on the lookout for our 1:1 Essen Spiel interview with James coming soon. 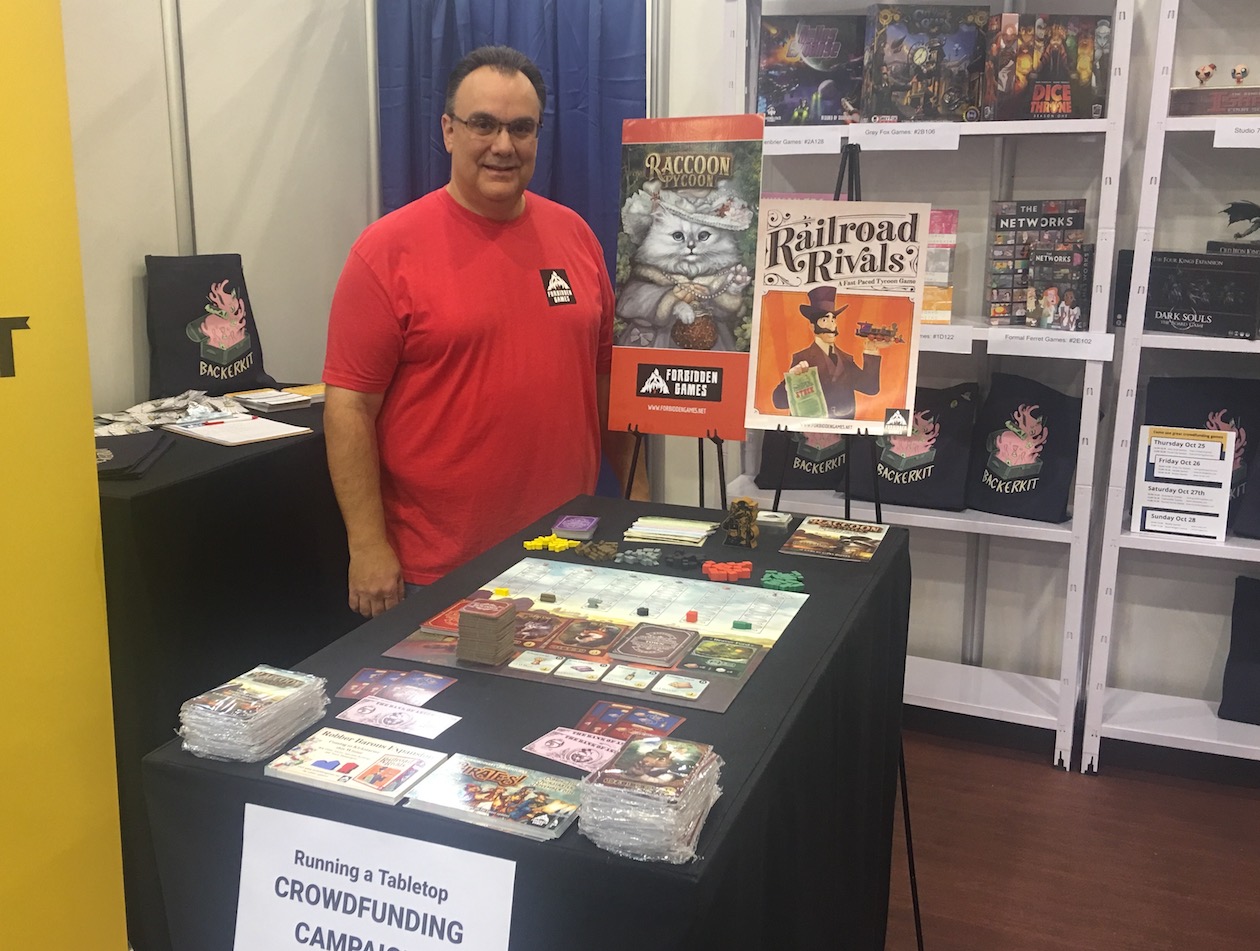 Hanging out with Forbidden Games was great. They were demoing their latest game Raccoon Tycoon which was funded earlier this year with over 2k backers! Really fun game featuring some clever ideas and solid art. 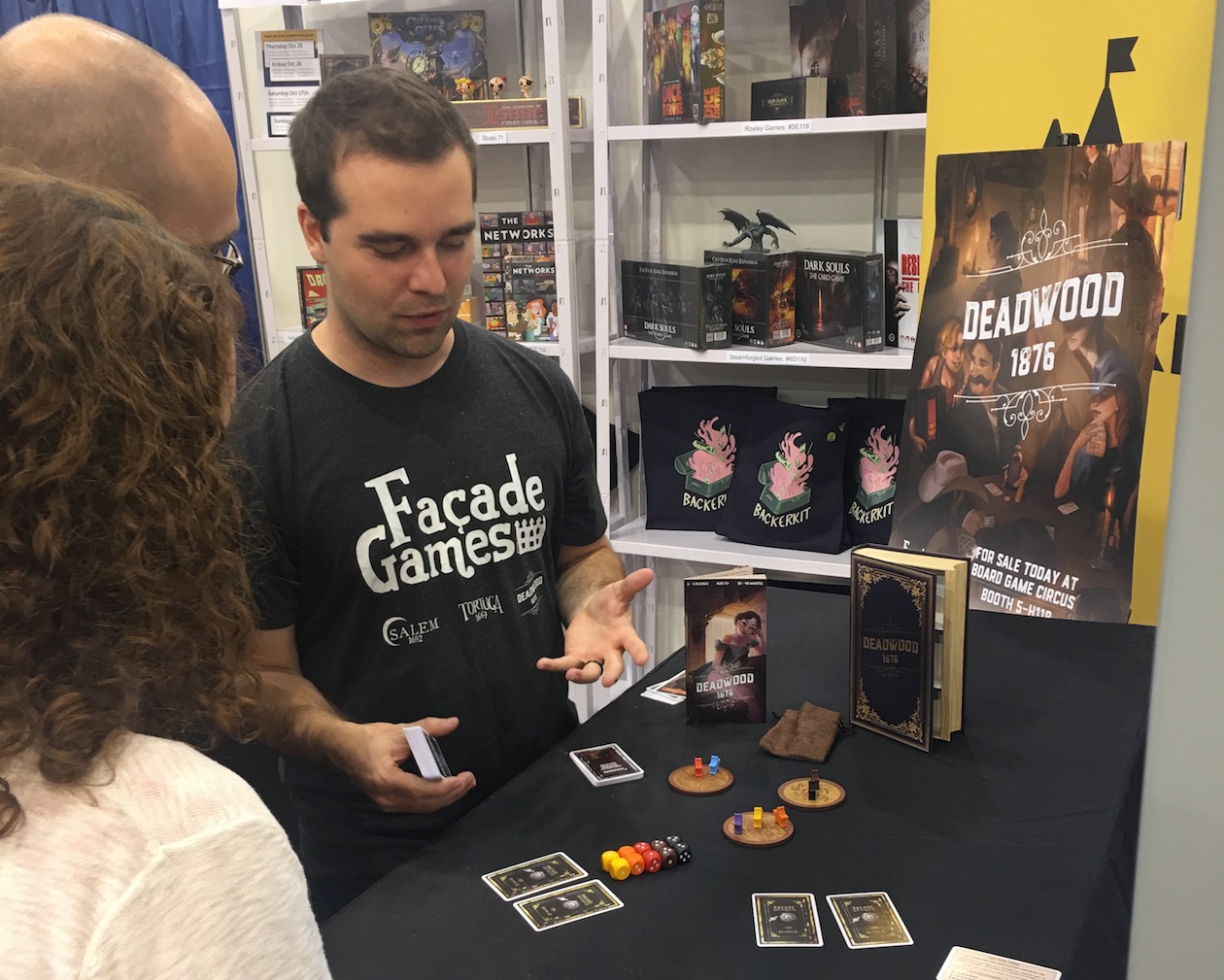 We’re big fans of Facade Games who continuously produce top-quality tabletop gaming experiences housed in unique book-themed boxes. They were demoing Deadwood 1876, their latest creation featuring some of the most iconic names in Wild West history! I enjoyed playing this with game designer Travis Hancock discovering some hidden easter eggs on the box and in the instruction book. 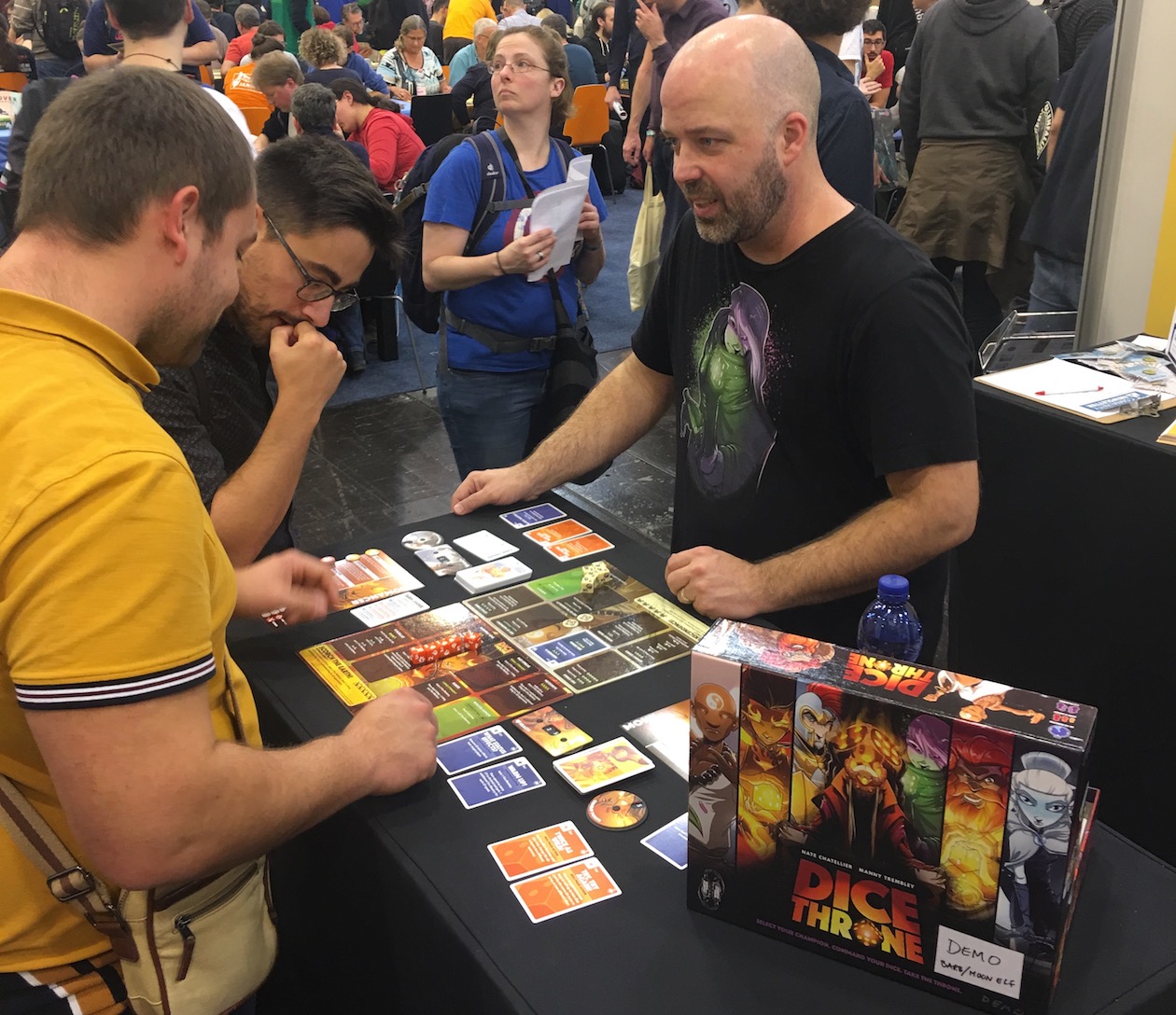 I was impressed by how excited and involved gamers would get playing Dice Throne for even just a few minutes. Gamers were quickly pulled into this experience immersing themselves in the fast and dynamic gameplay that begs to be played again and again. I watched several games over the course of about 4 hours, and each game was vastly different from the last.

We love the Mantic Games team, and it was a blast hanging with them during Essen Spiel this year. At Gen Con, we interviewed Rob Burman about their latest game Hellboy: The Board Game. This time around, we got to see The Walking Dead: Here’s Negan in action. Every time I see a new game from Mantic, I’m floored by how painstakingly detailed their miniatures are. You simply have to see these in person for full appreciation. 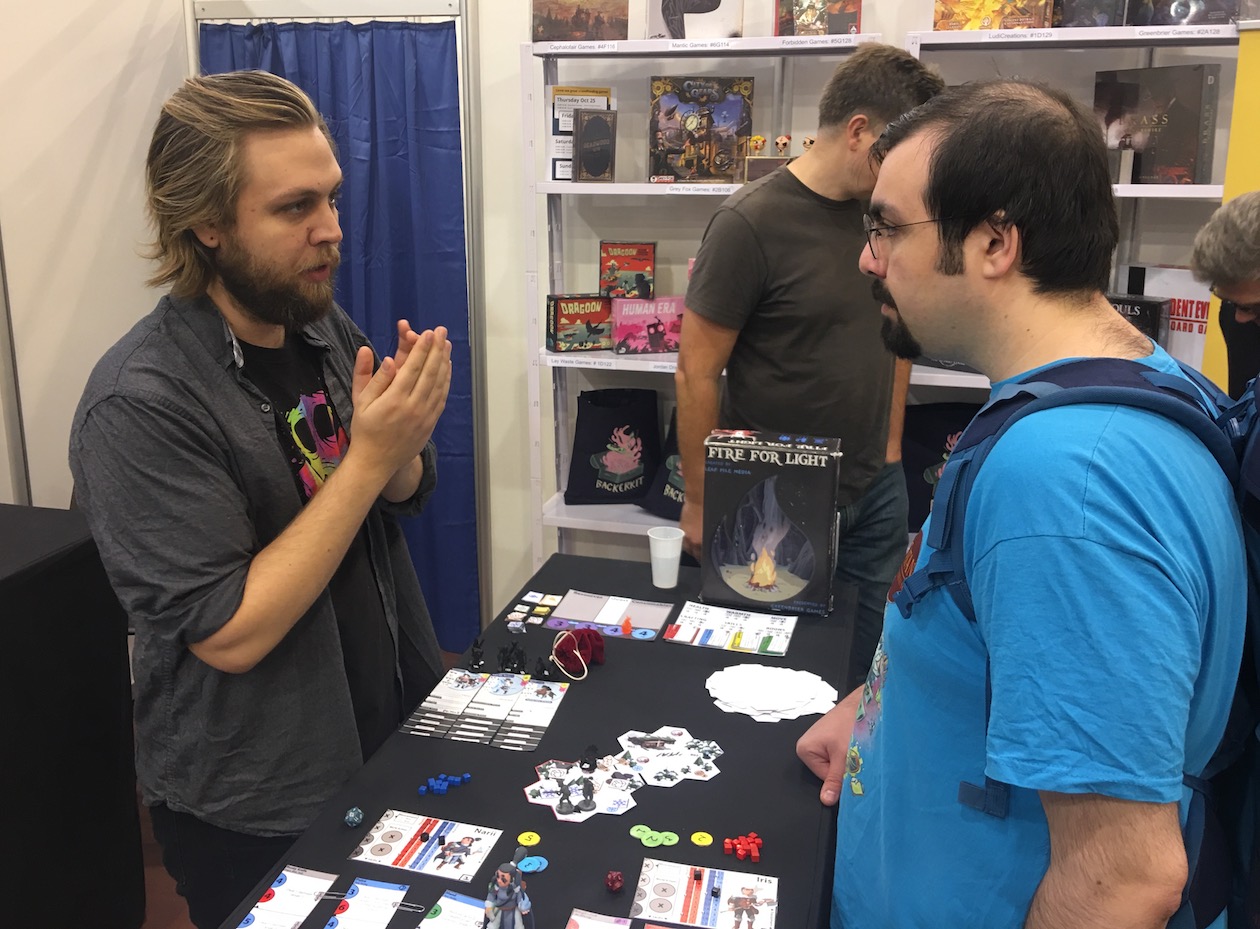 When Walter from Greenbrier Games started setting up, I was immediately drawn to this new game I’ve never seen before. He brought the prototype for a new game called Fire For Light featuring some stellar art design and some really cool narrative elements. And promise of a companion App. to heighten the experience sounded promising. Be on the lookout for this one in August 2019 on Kickstarter along with a 1:1 interview coming soon. 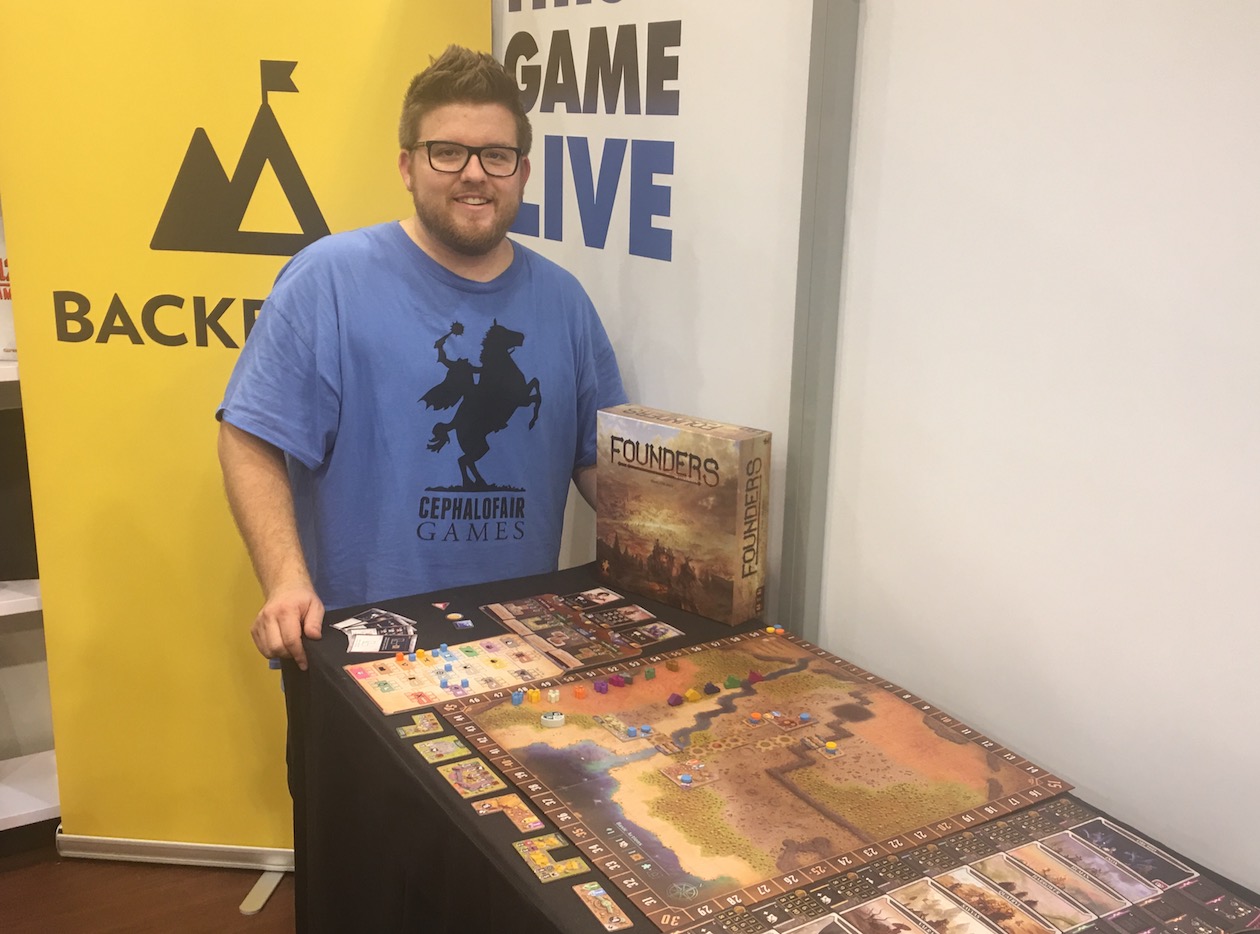 Game designer Isaac Childres rocked the tabletop game world with his Kickstarter hit Gloomhaven. His follow-up game, Founders of Gloomhaven, takes place hundreds of years in the past further defining the game world built in Gloomhaven. It was a pleasure having Cephalofair Games show off Founders at our booth this year and watch attendees share their love for these games. 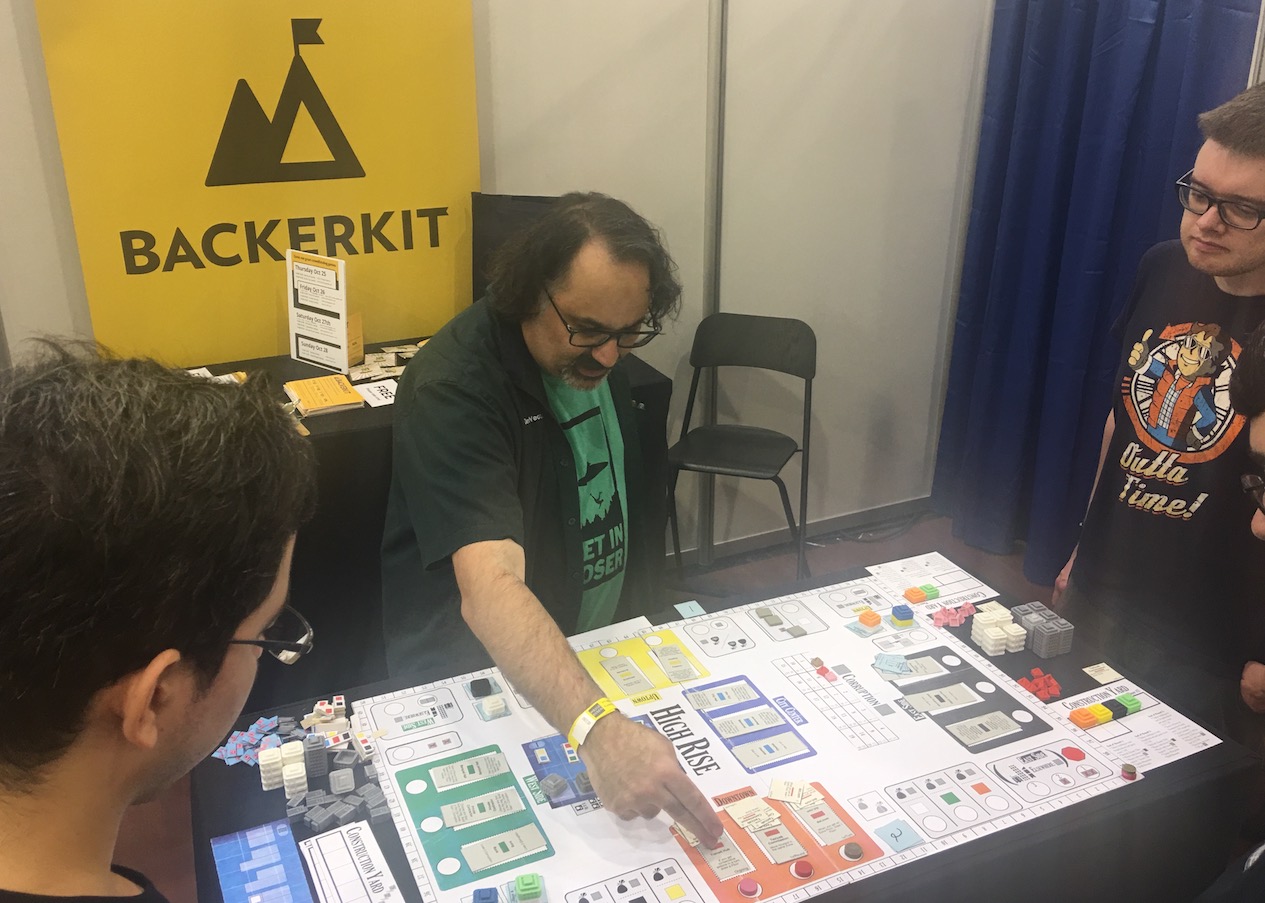 We had the pleasure to spend some quality time with Formal Ferret’s Gil Hova as he demoed a prototype for his new game High Rise. Playtesting a game in this form is a crucial step for anyone serious about making games. It was exciting to see gamers ask questions that will shape the final game. Be on the lookout for this one on Kickstarter in February 2019.

After 4 straight days of gaming bliss at Essen Spiel 2018, I can safely say there’s a lot to look forward to in 2019 and beyond. It’s a good time to be a tabletop gamer, and thanks to crowdfunding, game designers can create the exact games they want fueled by their strong communities.

Be sure to join BackerKit’s Community Newsletter to receive all our upcoming Essen Spiel 2018 interviews from your favorite crowdfunding creators.