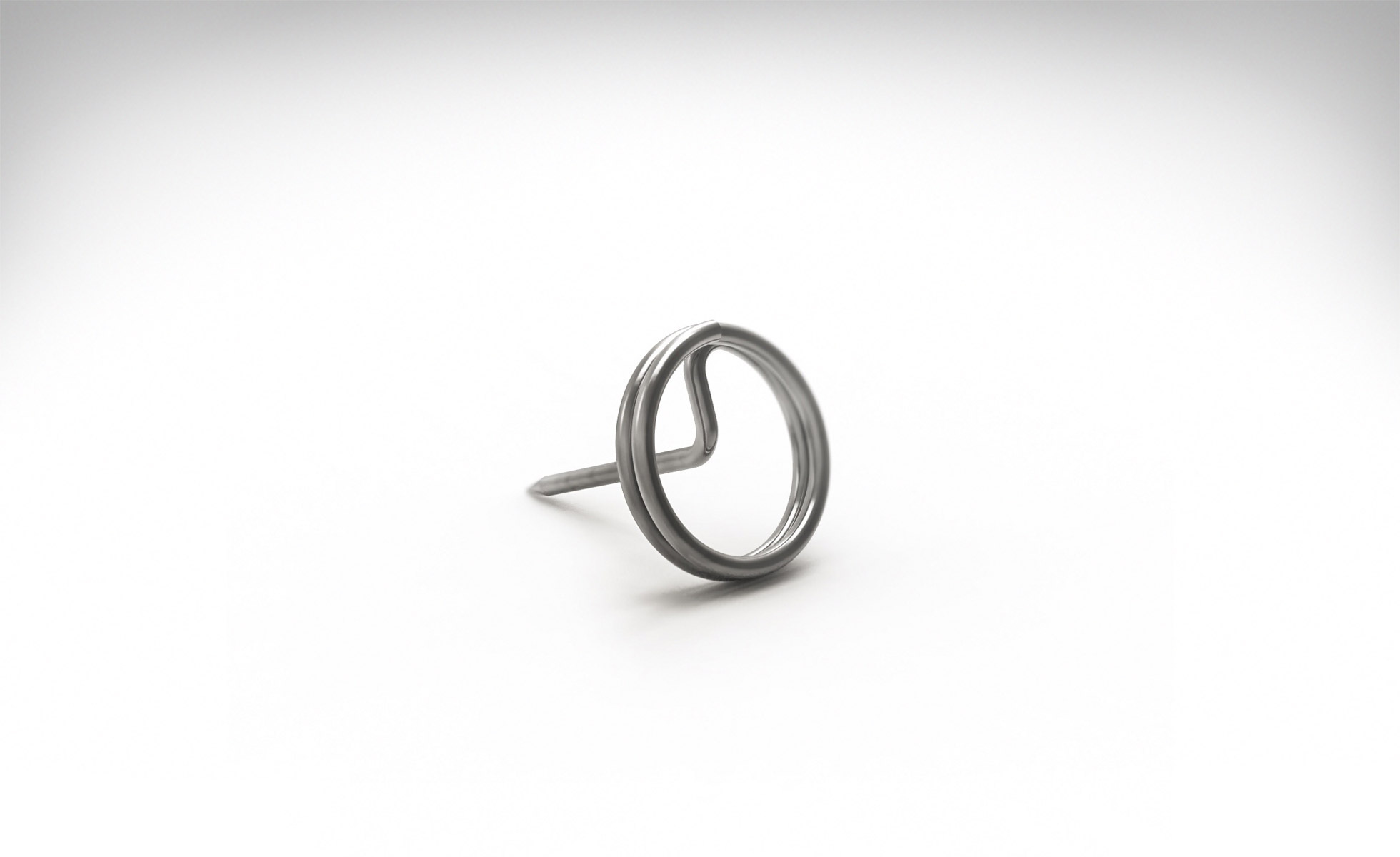 From Surveyed to Shipped: The BackerKit Project Lifecycle

Visualizing the lifecycle of a crowdfunding campaign can prove difficult for first-time creators. This is particularly the case for the post-campaign phase, which encompasses the window between reaching your funding goal and the delivery of your rewards to backers.

If you’ve little experience at hand, it can be hard to set and manage expectations, especially with so many variables at play. That said, there are some general guidelines to make this process easier to define.

As a general rule, it’s wise to allocate more time than you need. This means setting deadlines that incorporate a sizeable buffer against unexpected production delays, manufacturing mishaps, or unforeseen hitches in fulfilment.

BackerKit recommends sending out surveys 14 days after your campaign has ended. On average, 70% to 75% of surveys in BackerKit are filled out within the first three to five days. But that’s no reason for complacency – your work’s not over yet.

“The more communicative the creators are – the more they post on their campaign page about their timeline and so on – the stronger the conversion is for surveys.”

BackerKit’s Head of Support, Michael Kent, says that the timeline for charging cards and locking down can vary immensely. He’s seen project creators charge within a week of 80% survey completion; some project creators have even charged orders while surveys are progressively being completed. In more extreme cases, some have even charged a few times a day while surveys are being sent out.

Kent cautions against this last approach. “That’s not something we recommend, because once your lock and charge, the backer can’t change anything but their shipping address,” he says.

‘That complicates things as far as the support flow goes because once a backer is charged, they can’t make any changes without writing us an email. Making that change entails a refund in order to unlock the order and change it.”

The ‘happy path’, as far as backers are concerned, involves giving your supporters enough time and flexibility to update their orders. This means holding off and waiting to charge cards once you’re ready to fulfil your campaign rewards.

“Some creators need to charge cards immediately for pre-orders and add-ons in order to ramp up production,” he says. “Others with a more robust production plan will want to start manufacturing production for far more orders than they’ve received in crowdfunding. They can usually hold off and wait to charge cards closer to when they’re fulfilling items. He says this tends to result in a “happier backer flow”.

This option is a best practice recommendation, but Kent notes it requires creators to “have enough funds available to get to production and manufacturing for all of your original campaign rewards and add-ons, which can be difficult”. 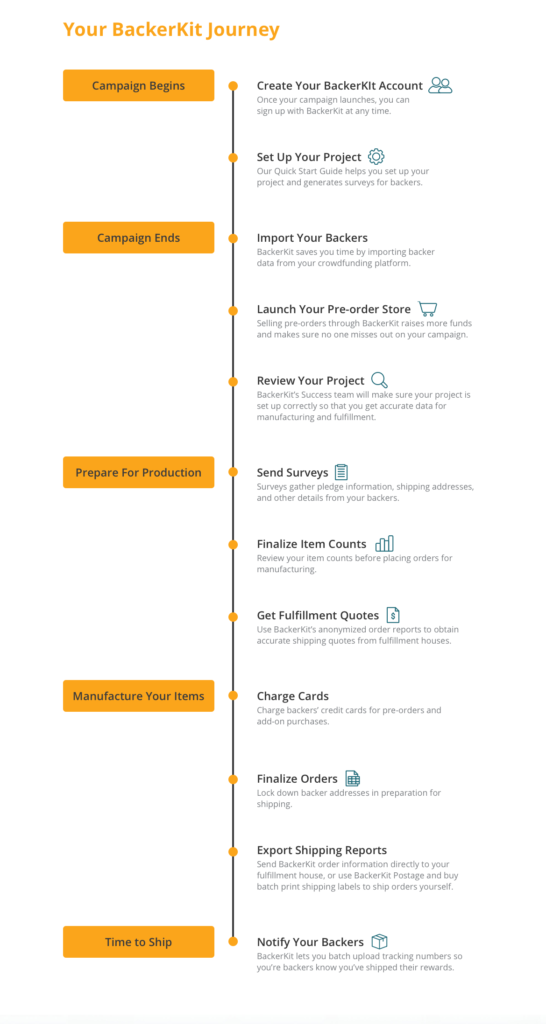 Another source of support tickets occurs when creators charge cards. It’s inevitable, but not an insurmountable obstacle: Kent says queries can be kept at bay by keeping your backers informed of your project timeline.

“You need to make it really unmistakably clear to your backers that you will be charging them on a specific date,” Kent says. “Sometimes, if a backer is blindsided by a charge, or if they assume that the money was taken during the survey, it could cause financial issues for them.”

“That’s never a position you want to put your supporters in, so definitely post an update or two updates leading up to your charge date to make it clear that they will be charged then.”

A project’s lockdown date will largely be determined by your fulfilment partner and whether your project relies on specific counts for manufacture.

For instance, if a project needs to ramp up production based on direct counts, Kent notes a lockdown date should be set relatively soon so that as many backers can fill out the survey as soon as possible, allowing counts to be calculated with the most accuracy.

On the other hand, if a project doesn’t depend on direct counts – these might include project creators who plan a pre-order store or Indiegogo InDemand campaign as well – the timeline differs. “If they’re expecting to have ongoing orders and manufacturing, they’ll probably just put in a huge order with their manufacturer, and therefore don’t need to worry about counts,” Kent says.

“In that situation, it’s best to set your lockdown date much later – you might not even lock orders until you are ready to ship. That’s a better flow for backers support-wise, because they’re able to make any changes they want, and that doesn’t matter to the creator because they’re overproducing everything in anticipation of more orders in the future.”

Mark Weiser, creator of the PON push pin, said he endured delays in production that were unexpected.

“I encountered some issues after the Kickstarter campaign,” he says. “The company I was going to work with flaked on me, they weren’t able to do what they said they would, so I had to scramble. My project ended up being delayed by 6-8 months because of that, and I had to go overseas instead.” This meant that the timeline for delivering his campaign blew out significantly.

For his first campaign, Weiser noted that there was too much complexity in terms of the rewards offered to backers. But he learned from the experience the second time round, electing to radically simplify his campaign.

Generally speaking, when delays occur and are announced through project updates, creators can expect a spike in the volume of support tickets. When in doubt, transparency is the best policy – better to let backers know that a delay is forthcoming, rather than keep them in the dark.

The scale and complexity of your project will determine the time it takes to ship your rewards to your backers.

“Usually, if you’re either working with a fulfilment center or by yourself, you’ll need to separate your backers into similar package groups and ship based on those groups of similar items,” Kent says.

He notes that shipping times will also hinge on your project’s manufacturing timetable.

“A lot of the time, project creators want to ship immediately. The first items to come off the manufacturing line that pass quality assurance are often the first ones to start shipping. That might be a deciding factor in your packaging groups,” he says.

“That might create a snafu if you’ve got another item in the same order that is not manufactured yet.  Some project creators might choose partial fulfillment in this scenario; others might wait until everything has come off the line.”