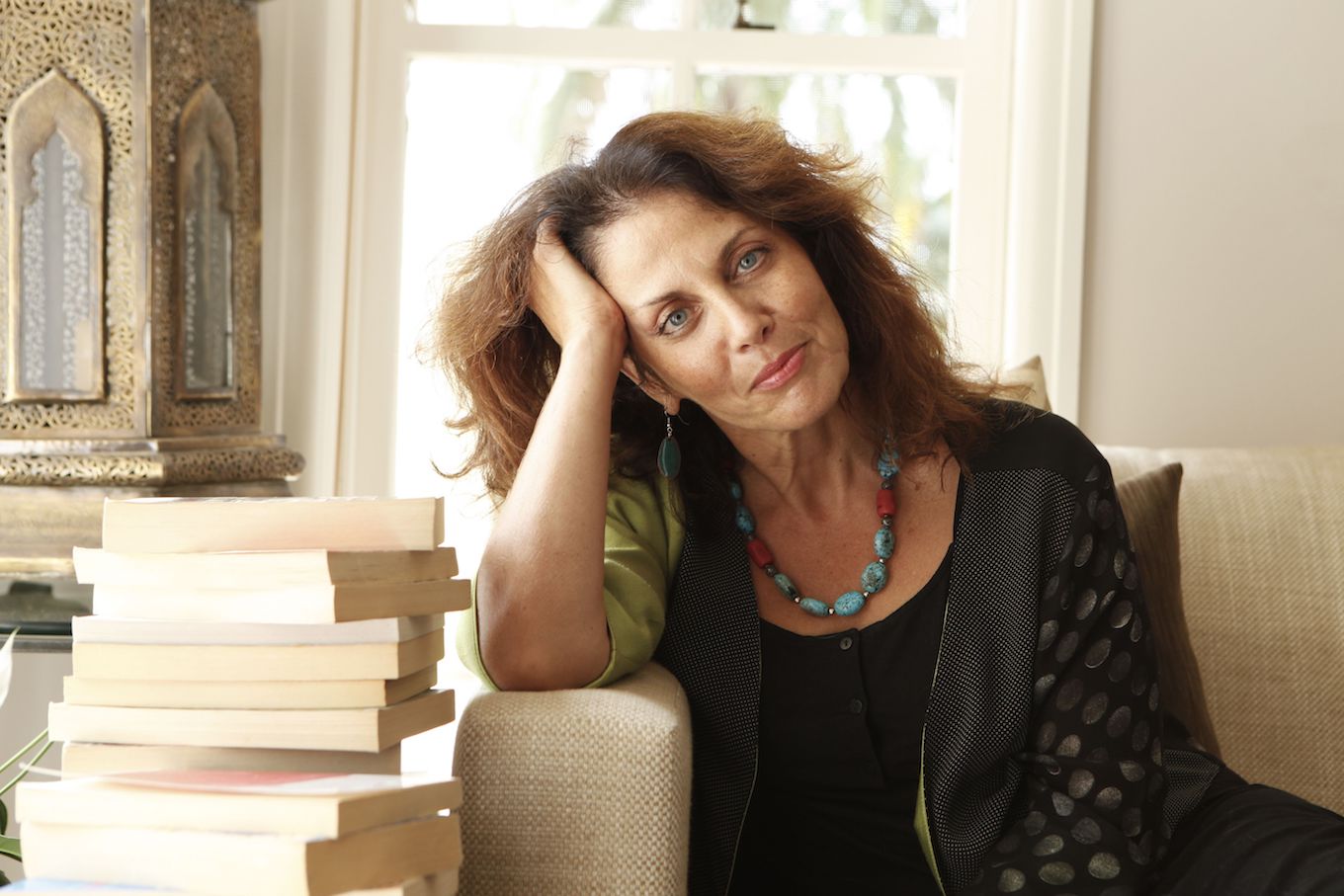 For the past several years Australian author and foreign correspondent Irris Makler has been creating something truly special. She’s been hard at work recording stories of Holocaust survivors and photographing them cooking their signature recipes with their grandchildren. Just Add Love is the culmination of her inspirational journey—equal parts cookbook, photography book, and history book.

I recently had the privilege to interview Irris learning more about her experience creating this wonderful book and why she decided to crowdfund Just Add Love on Kickstarter.

For those just learning about Just Add Love, can you tell us more about the women you decided to feature?

The women come from all over Europe, Russia and North Africa – which means the stories and the cuisine are both varied. More than 20 grandmothers – along with 2 grandfathers! – tell their stories and share their cooking secrets.

These are Jewish women, with a universal message – that you can rebuild after losing everything. They are survivors of genocide and the last eyewitnesses to the terrible events of World War Two.

Many arrived in their new countries with only the clothes on their backs and the recipes inside their heads. For those who didn’t have even a single photo left from their family, the smell and the taste of the food from home was memory. 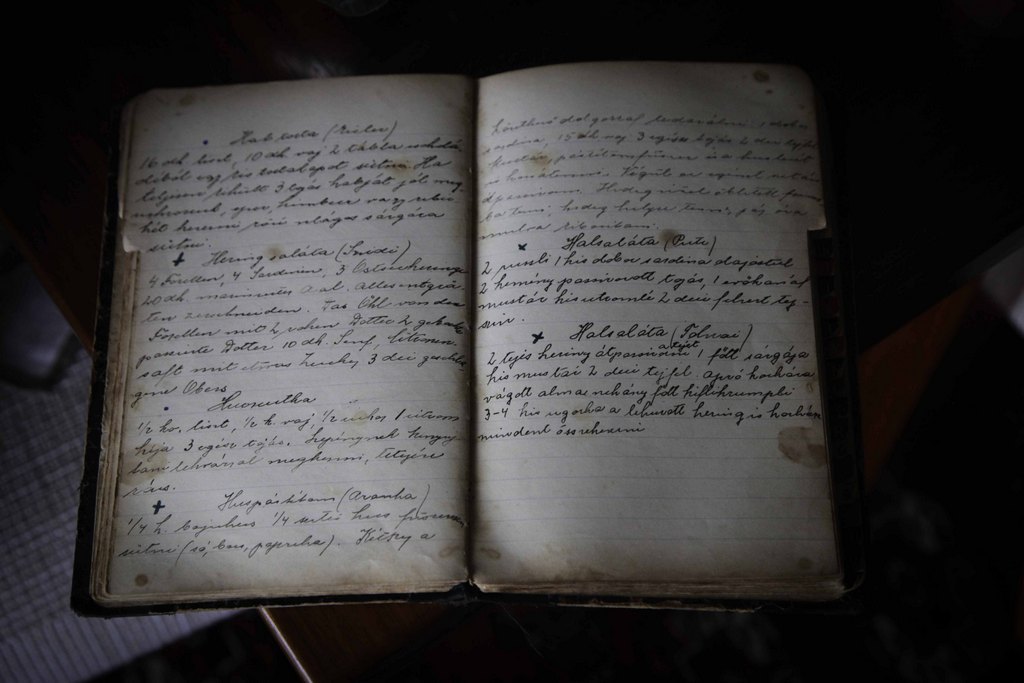 Eva Grinston’s cookbook that she found after the war

What motivated you to create such an inspirational collection of stories, photos, and recipes?

When my grandmother died, it turned out that no one had written down her recipes – and I found myself trying to recreate her honeycake… so I knew the importance of preserving family tastes when I saw the mother of one of my closest friends cooking from a battered old handwritten cookbook. It turned out to be a book with a story.

Eva Grinston, now in her 80s, is a fabulous cook and baker. Eva is also a Holocaust survivor who was held in the Nazi death camp of Auschwitz – where her mother, sister, and aunt were murdered.

At the end of WW2 Eva was 16 years old and lucky to be alive…  She returned home but felt that little remained of her past until she discovered a box in the cellar.

In it, was her grandmother’s cookbook. That’s the book I saw in her kitchen. That’s the book she’s been cooking from ever since, keeping alive the tastes of this vanished world. It’s a link to her past, and also to her future, as she cooks from it for her grandchildren. Eva’s cookbook started me on this path. 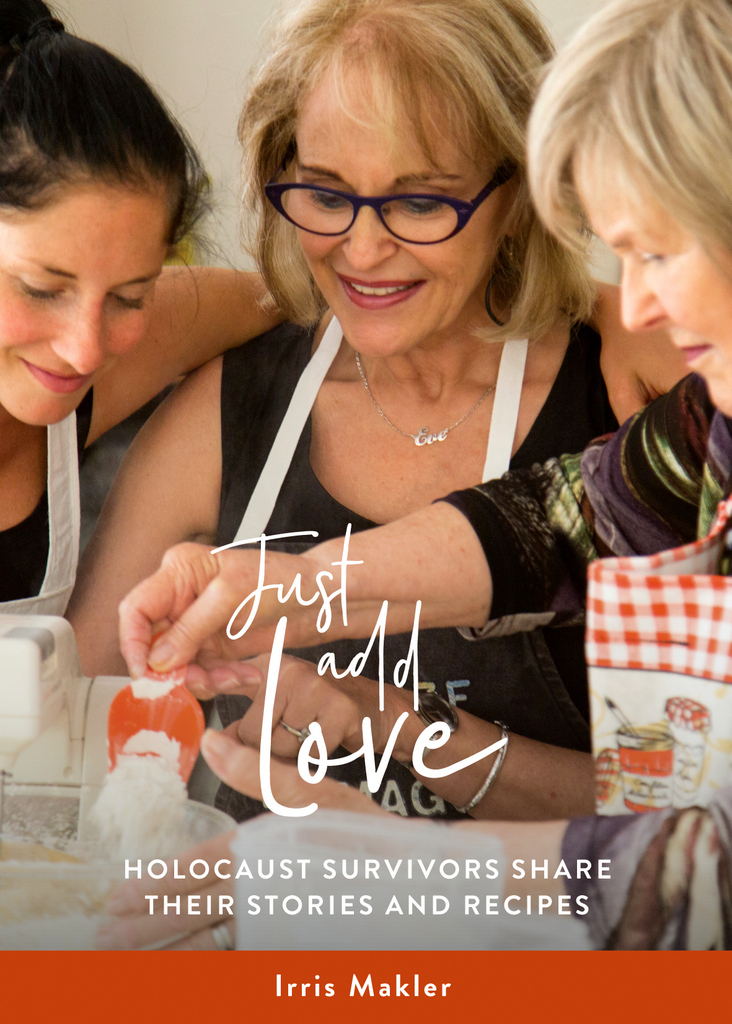 What inspired you to crowdfund this book? What made you choose Kickstarter?

It’s a first for me, I’ve never done anything like this! I’ve written 2 books which were published by mainstream publishers… but in the end, it was about time and control.

It took me so long before I was ready to go to a publisher, it really has been a labour of love doing the interviews and the photos over a number of years. By the time I was ready, I didn’t want to spend a minimum of another 12 months inside a big publishing house. Also, crowdfunding allowed me to pick my dream team of photographer and graphic designer granting more control over the final product.

I took advice about which platform to choose. Since this was waaaay outside my comfort zone, I joined a group run by a woman whose job is getting people ready for their crowdfunding launches (Khierstyn Ross, Launch and Scale). At the beginning, it was like she was talking a foreign language, but she was great and got me over the line. And even though she’s a big Indiegogo fan, her advice was that for a book, Kickstarter was a better fit than almost any other platform, particularly due to its audience reach. 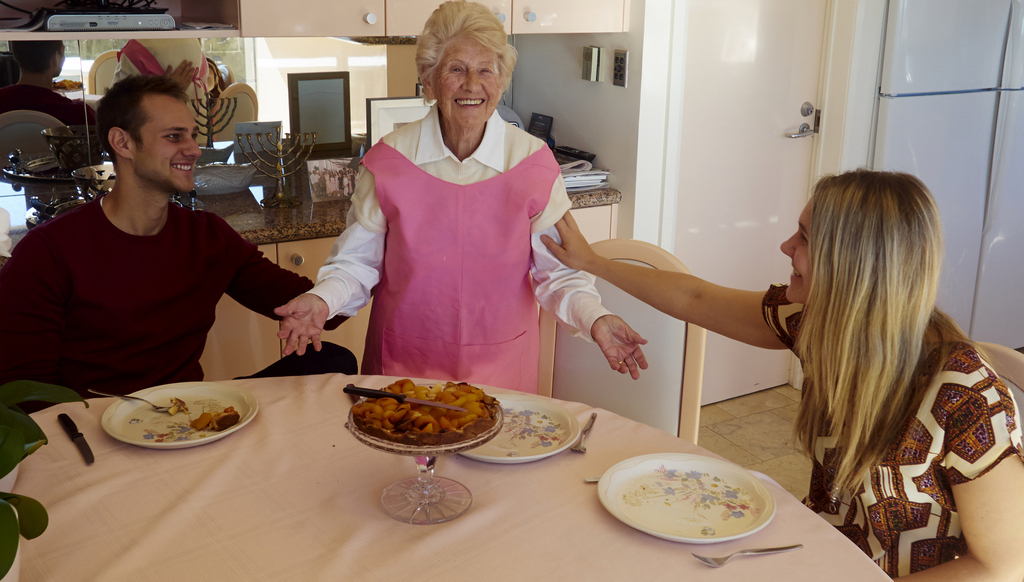 I imagine meeting these women was a moving experience. Can you explain your overall process for collecting the stories, the recipes, and the photos?

I was looking for a mix of stories and of recipes. I wanted the book to be as varied as possible, both in terms of experience and cuisine. So we have amazing recipes that are also very different from each other. There are mouthwatering dishes like mezze from Libya and Greece, dumplings from Central Asia and fabulous cakes from Austria and Hungary. Actually, fab cakes from everywhere. Grandmothers love to bake…

And a spread of locations means that the book includes little-known stories like what happened to the Jews of Libya when the Nazis invaded. And there are 2 women who escaped from Europe and ended up in a Japanese POW camp in Indonesia. So you see a huge spread of experience, as well as the incomprehensible suffering of being in a death camp like Auschwitz. There are also a number of women who were rescued by extraordinary people who risked their lives to help them… so it’s an amazing range.

Once we had the women ready to cook, the hardest thing was to find a time that suited the busy grandchildren. I was surprised by how many grandsons put up their hands to be part of the cooking sessions – now dwarfing their grandmothers… And once we had everyone in the same room, the photographer worked his magic. Australian photographer David Mane is incredibly talented and he drew out the humour and the love. His photos really set this book apart. 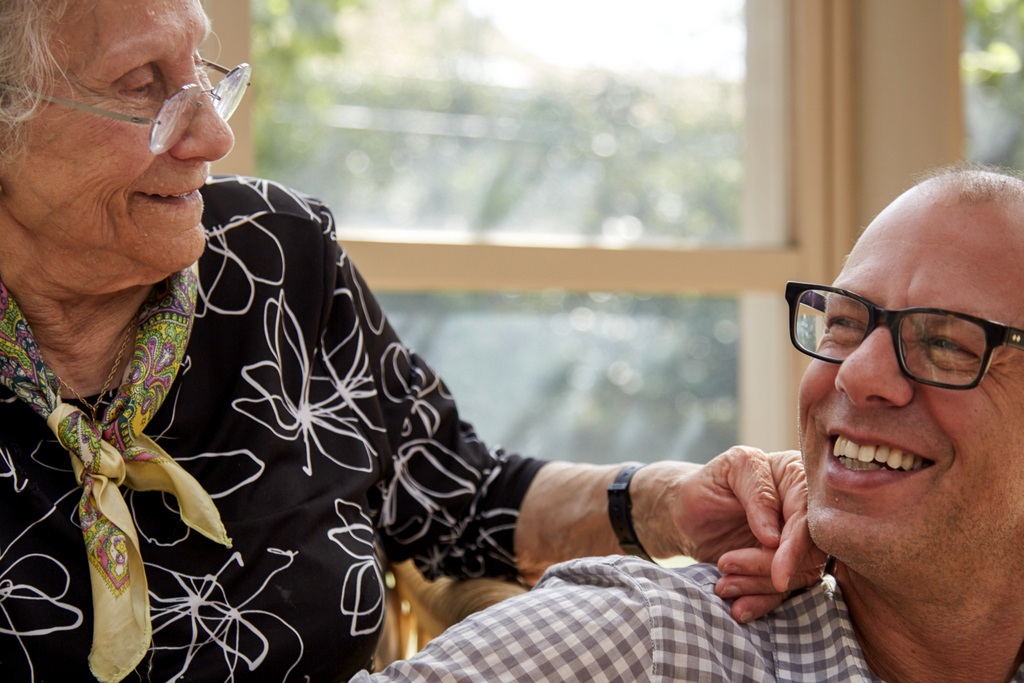 I’m sure it’s impossible to choose a favorite, but was there a single recipe that stood out? Why?

I really loved the yeast recipes. I used to be frightened of baking with yeast, until I met one of the grandmothers in this book. Baba Schwartz turned out to be a real yeast ‘maven’. She taught me to have faith, to do what she said, and to produce wonderful, fail-safe super delicious cakes. It was so amazing to see buns filled with lemony cream cheese, nut and jam rolls, and chocolate and poppyseed cakes coming out of my own kitchen!

Baba has passed away now, but getting to know her was one of the highlights of this project. We formed a deep bond, and walking into her home and smelling the yeast cakes baking and having coffee and talking with her was pure pleasure. 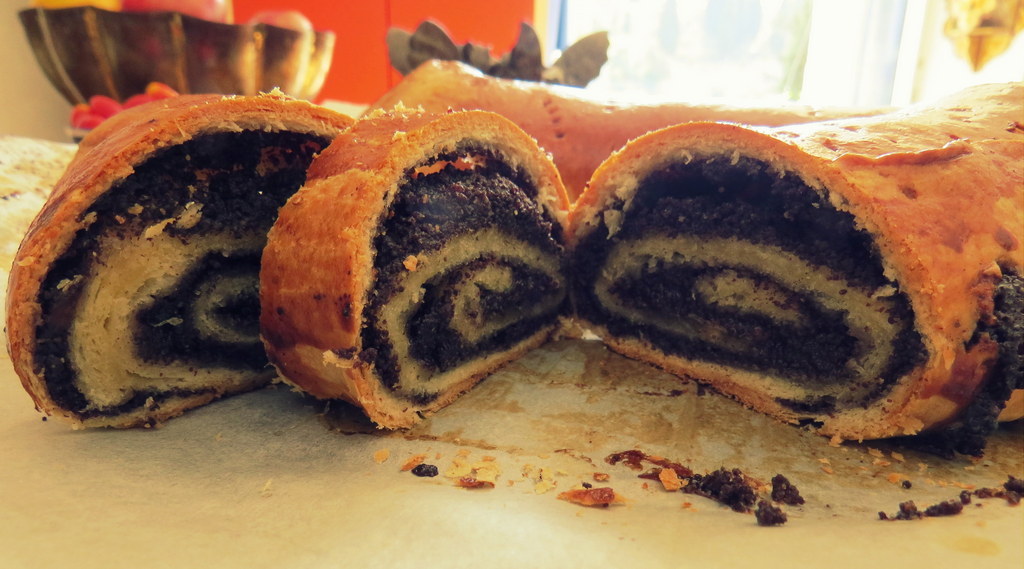 I’m intrigued by your Podcast stretch goal featuring audio interviews with the grandmothers. How can people tune in to these?

That’s a great question! I’ve made 3 podcasts each about 20 minutes long, weaving together the stories of 3 of the amazing women from this book. I recorded them cooking with their grandchildren during the Jewish festival of Passover a couple of years back.

I’m planning to launch the Just Add Love podcast on Holocaust Memorial Day (27 January 2019) and to release one a day for 3 days in a row. There is nothing like hearing the women telling their stories in their own voices, with their own inimitable accents.

You can tune in on the Just Add Love SoundCloud page

How can people get a copy of Just Add Love if they missed the Kickstarter campaign? Any other announcements you’d like to share?

And if you’re lucky enough to live in Australia or New Zealand, it will be in the shops there beginning April 2019. And later in the year, it will be available via Amazon so keep on eye on our main website.

Just Add Love is an inspiring example of a passion project come to life via crowdfunding. And no one can verbalize its importance quite like Irris—”In spite of everything, it’s a joyful book, focusing also or recovery, resilience, and triumph”.