We discovered Lovebox at a recent hardware meet up hosted by Kickstarter and really enjoyed this fun and unique way to send digital love messages. We spent some time with co-creator Marie Poulle to learn more about Lovebox which is currently live on Kickstarter.

Why Crowdfunding?
Crowdfunding has been a part of the project since the very beginning. When I met Jean and his Lovebox, the first thing he told me was: “Many people who met the Lovebox asked me if they could buy one, I’ll do a Kickstarter campaign to spread Loveboxes around the world!”. Two years later we finally did it!

Since the very beginning, we have been gathering all Lovebox fans through our Facebook page and mailing lists. We met so many amazing people who wanted to share more love and happiness with their loved ones. We though that a crowdfunding campaign would be the best way to get the Lovebox to people in Europe, US, and Canada. And we even received messages from people in Australia and Singapore who wanted to support the project. The Kickstarter platform is a powerful tool that can help us spread our Lovebox to the entire world!

What’s the coolest crowdfunding project you’ve ever seen? (Besides your own of course)
I recently pledged to a project that wanted to launch a decorative satellite in the sky called Orbital Reflector! An artist will launch the first satellite to exist purely as an artistic gesture and I love the idea that people from everywhere in the world will point to it with their fingers and try to know which star it is!

How did you learn about Backerkit?
A lot of friends who used Kickstarter told us about the very tough phase after the Kickstarter campaign where you have to take care of organizing the backers info and how complicated it can be. And actually, we kind of lived this situation last Christmas when we had to deliver 500 Lovebox units with only an Excel spreadsheet to gather information. We knew we had to find a better solution! So we asked Google and your name came out of its mouth.

Do you have any hobbies and/or collect anything?
I collect smiles. Everyday I play a little game which makes me feel happy. I smile to people while walking in the streets and i’ve got one goal: collect as many smiles as I can! I love to see the eyes of a person fill with joy and happiness just because a stranger smiled at them. A few seconds of free happiness!

What’s next? Any upcoming projects you want to share?
First, we will ship the Loveboxes ordered through Kickstarter! The first 3500 of them will be delivered for Christmas. We can’t wait until December 24th so we can imagine all the Loveboxes under Christmas trees!

We are also working on a new version of the product. The Lovebox could be used in so many more ways and for so many different kinds of relationships. We have thousands of ideas in mind! And we also have new products in mind, we want to build a network of communication devices dedicated to positive emotions. We are building the Internet of Feelings. And we should unveil a new product every year starting next year! 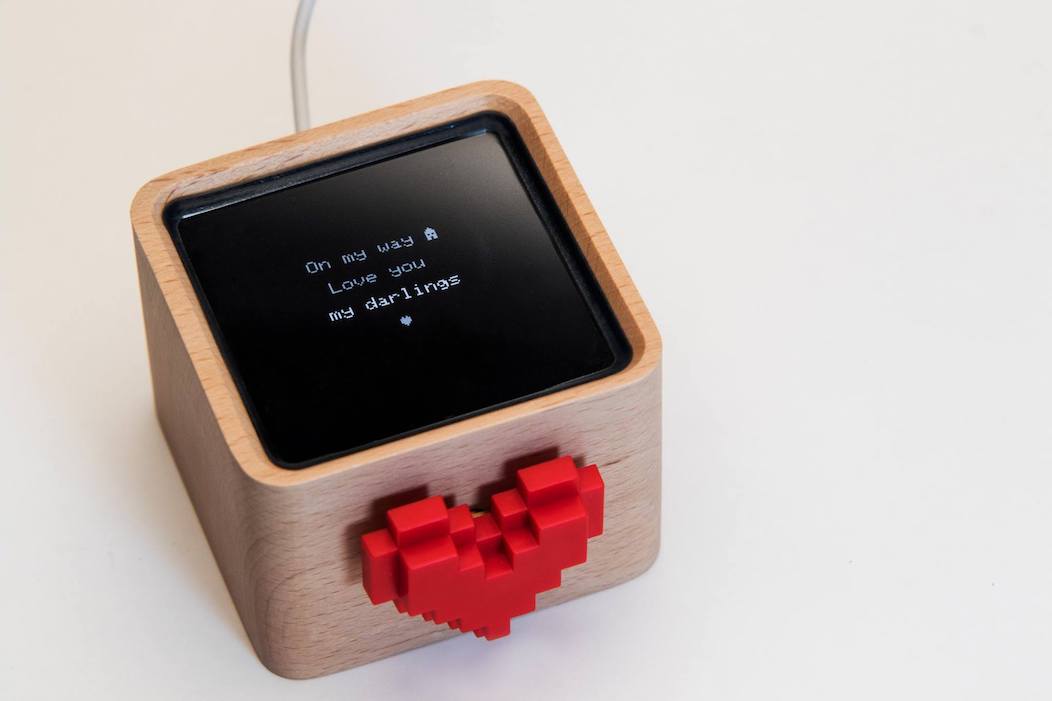 What inspired you to create the Lovebox?
Jean invented and built the first Lovebox for his fiancée Mélodie two years ago in France. He was about to leave for a year to get his Post-Doc at MIT in Boston. He wanted a special way of communicating his love with her, so he invented and built a Lovebox. He made it in a FabLab and gave it to her a few weeks before leaving.

I met Jean 10 days before he left to Boston, while he was exhibiting the Lovebox and a few other inventions of his own in the FabLab. I fell in love with the concept of Lovebox and thought of other relationships where the Lovebox could be useful! A few weeks later we started working together to spread the Lovebox everywhere and build the Internet of Feelings.

What’s your favorite Lovebox feature?
My favorite feature is the ability to receive a notification saying “your love note has been read”. It happens all the time with my grandma for example, I send her a message in the afternoon and by night, when i’m going to bed I receive a “read-receipt” and I know that she just woke-up on the other side of the world!

Please take a second to check out the Lovebox Kickstarter campaign page and visit the official Lovebox website.