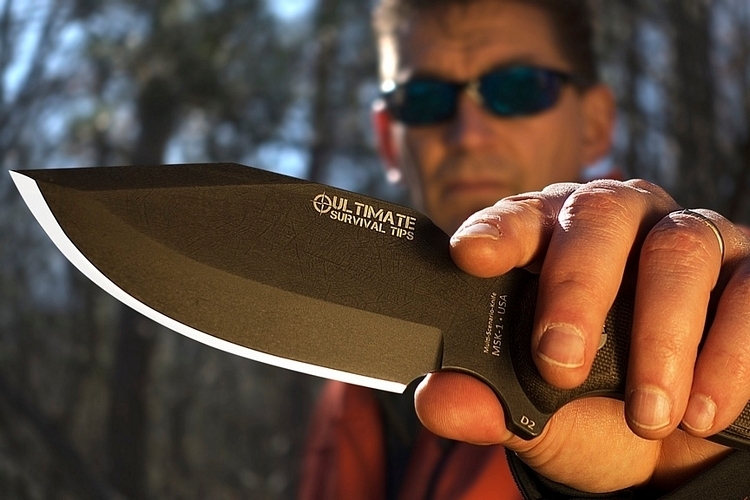 You said it could never happen. You said it wasn’t possible. Well, you were wrong. Dead wrong. The zombies took over the planet in a matter of hours. Once the virus spread, there was nothing humanity could do to stop the hordes from growing. But there was a sliver of light amid the darkness. His name was David, creator of the MSK-1 Survival Knife, and I owe him my life.

Below are the few journal entries I could salvage detailing the days shortly after I met David. We both survived the initial attack, and thanks to the MSK-1, we had the chance to survive even longer.

Journal Entry #004 – Staying Warm
After narrowly escaping the ravenous zombie hordes, David and I are finally out of sight and in need of warmth. To avoid night-time detection by Zombies, we built a fire that had to be unseen. David recommended making a “Dakota fire pit”. He used his MSK-1 Knife to fashion a flat-ended digging stick out of a fallen hardwood branch. He dug a hole that was twelve inches in diameter and about eighteen inches deep and then dug a connecting subterranean air shaft that met the hole at a 45 degree angle. After gathering kindling from a fallen cedar tree, David used his knife to fashion a bow drill kit from a dry basswood branch. Using the MSK-1 bow drill divot as his handhold socket, he created a coal, and carefully transferred it into his birch bark tinder bundle. I then blew the smoking mass into flames and used it to start a tee pee fire inside the pit. We had to do this all so very quietly as not to alert prowling Zombies. We are warm and safe…for now.

Journal Entry #009 – Making Shelter
As if things weren’t bad enough, it began to rain today. David said we needed to make a shelter to stay warm and protect against stray zombies. Since our fire was below ground hidden and contained, David decided to fashion a camouflage A-Frame around it, using the MSK-1 knife to chop and cut natural materials to conceal our location and get out of the rain. As I write this, I can hear bellows from nearby  zombies that have strayed aimlessly into the darkness of the woods.

Journal Entry #014 – Gathering Fresh Water
After days of unrelenting downpour, the rain has finally stopped. David suggested we use this as an opportunity to collect, boil, and store as much water as possible for the days ahead. David reveals a 1 liter heat-resistant bag hidden in the handle of his MSK-1 knife. I head to a nearby stream and fill the bag with water. As I was about to take a deep drink, David grabs the bag right out of my hand reminding me that the zombie virus may be transmitted via water. While I’ve seen enough zombie movies to know better, I fear I’m losing part of my mind from dehydration. David quickly suspends the bag above our fire and brings the water to a quick boil ensuring all bacteria and viruses are killed.

Journal Entry #017 – Hunting and Gathering
Countless hours have passed, and with my thirst temporarily quenched, I grow hungry. David speaks of trout he spotted in the deeper part of the nearby stream. He also speaks of game trails leading to the water. Within the handle of the MSK-1, David pulls out 20 feet of 50 pound fishing line. He gathers a few worms from the nearby wet soil and fashions a fishing trap consisting of three fishing hooks and 10 feet of fishing line. Success! We caught one fish within an hour. We decided to construct 2 large figure four deadfall traps with the MSK-1, and use some chum (fish guts) as bait. I’ll check the traps in the morning for breakfast.

Journal Entry #023 – First Aid
If bloodthirsty zombies, lack of food and water, and my lack of sleep wasn’t bad enough, I cut my finger while sharpening a stick. David reminds me to always cut away from myself. Zombies are drawn to the smell of blood, so we need to fix this quick. Fortunately, the MSK-1 survival kit includes two FAT (First Aid Tinder) Packs. They are compressed cotton gauze infused with triple antibiotic. After rinsing the wound in our cleaned water, I disinfect the wound and wrap both FAT packs around my finger, mash some Yarrow leaves on a rock with the stout MSK-1 pommel, and lash them to my finger. The pressure will accelerate healing, prevent further bleeding, and mask the scent of blood. We can’t afford mistakes like this if we want to survive.

Journal Entry #027 – Zombie Defense
As night falls, I watch as David uses the MSK-1 to craft his primitive longbow from 1/2 of a hickory sapling. He makes three arrows from straight branches, turkey feathers, a bit of fishing line, and nearby bone remnants for arrow heads. He even used the shoestring from his right shoe for a bow string. This will come in handy if we run into more than one Zombie. Lastly, he sets up a perimeter using early warning tripwire alarms that he made from strands of milk weed and some cans we found nearby. After a long few days, it was time to settle in for the night. David gripped his MSK-1 holding it at the ready, confident and purposefully, as he had done so many times over the past few days. For the first time since this whole mess started, I feel safe.

After those initial and frightful days, David and I soon met up with a band of survivors. We built a stronghold that should last the coming weeks and fend off any remaining zombies. Looking back, I know for a fact I would not be writing this today if it weren’t for David’s survival skills and his faithful MSK-1 Survival Knife.

Now for some good news. You can check out more survival tips from David’s Ultimate Survival Tips Youtube Page, and it’s not too late to pre-order the MSK-1 Survival Knife.

Thanks for reading, and Happy Halloween!

*Written in collaboration with David from Ultimate Survival Tips