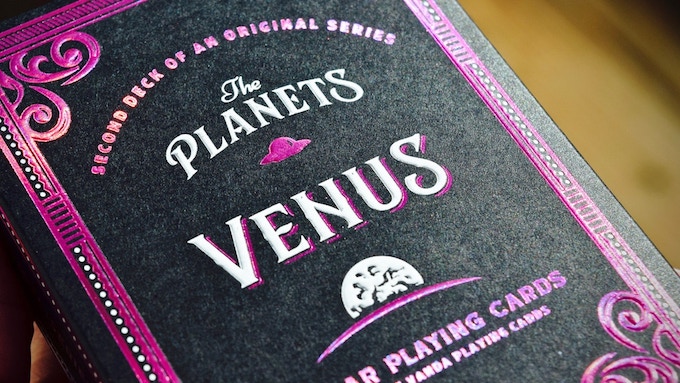 A lot of independent creators run multiple crowdfunding campaigns earning a sustainable source of income while building a dedicated community. One such creator is David Goldklang who currently has 8 consecutive Kickstarter projects planned featuring planet-themed playing card decks. The Planets series is a high-end collection of card decks representing the planets in our solar system featuring gorgeous artwork from graphic designer Srdjan Vidakovic.

I recently chatted with David about his crowdfunding journey and learned more about his The Planets: Venus campaign which is currently live on Kickstarter.

You’ve run several successful crowdfunding projects over the years. Can you tell us a little about your journey and overall progress?
I’ve certainly learned a lot since I launched my first Kickstarter campaign over 5 years ago. It’s really difficult to understand exactly what you’re getting into without any previous experience—there are so many aspects to running your own business and I vastly underestimated the amount of time & energy required to take them all on at the beginning. I think the most important aspect though is having constant and clear communication with your backer community. I made mistakes in my first few attempts and my biggest failure was not keeping my backers informed. Now I realize that they’re out there to support and help me and as long as I keep them in the loop, whether the news is good or bad, they’re going to cheer me on.

What can you tell us about Vanda Cards and the Vanda Artist Series?
Vanda produces designer playing cards and to date has created and sold nine decks, not including the current The Planets series. Most of those decks were designed by me except for the Duel deck which was the first project in the Vanda Artists Series. The Artists Series is a collection of products that are created in collaboration with some outstanding artists from around the world who I’ve discovered through Behance, Dribbble, and Pinterest. There are only a few products that haven’t sold out and those decks are available on our website. 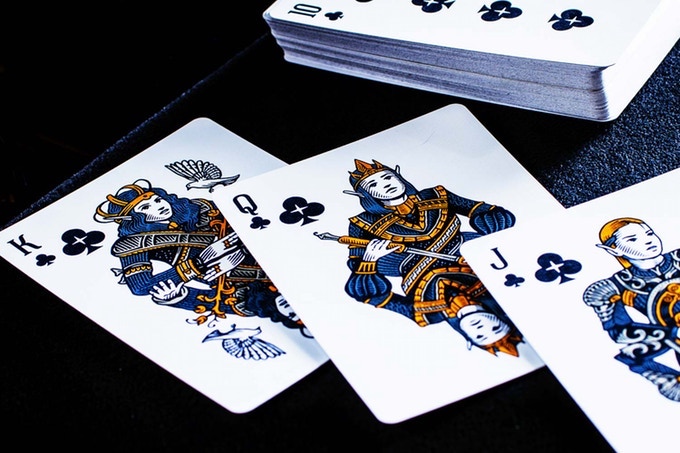 Tell us about the current Venus card deck and what made you choose “Planets” as the overall theme?
I’ve wanted to create a collectible box set of decks that make sense as part of a series and the planets theme works perfectly while providing a vast pool of inspirational imagery and meaning to draw from when creating artwork. Every planet has astrological significance, mythological relevance, and even color associations so there’s already so much information to utilize and it was a matter of filtering that down to what worked well for this particular project. The Venus deck (number 2 of 8), which is currently being funded on Kickstarter, showcases a feminine side to the planets. All of the court cards depict women and the underlying theme of the deck is love and beauty. Also, the campaign will be running during Valentine’s Day, which makes sense given that Venus is the Roman goddess of love!

How did artist Srdjan Vidakovic get involved with the “Planets” series?
I came across Srdjan’s work one day while browsing through posts on dribbble. I was immediately drawn to his gorgeous typographic work and line art style and knew it would be a perfect fit for my planets concept. I reached out to him and he was very excited about the project. It was about nine months between our first conversation and the Kickstarter launch of the first deck, Mercury.

Your campaign page is extremely visual with little text and no campaign video. What can you tell us about your approach to a solid and effective campaign page?
I think if you have a good looking product you should show it off. Since the images of the playing cards speak for themselves for the most part, there isn’t a whole lot of explanation required. This isn’t a new technology product that needs a detailed video—when potential backers see the artwork they either love it or they don’t. Also, at this point I have a pretty decent audience size of previous backers who know exactly what Vanda products are. Generally, I would strongly encourage making a video for one’s campaign, and I have done so for several of my previous projects. 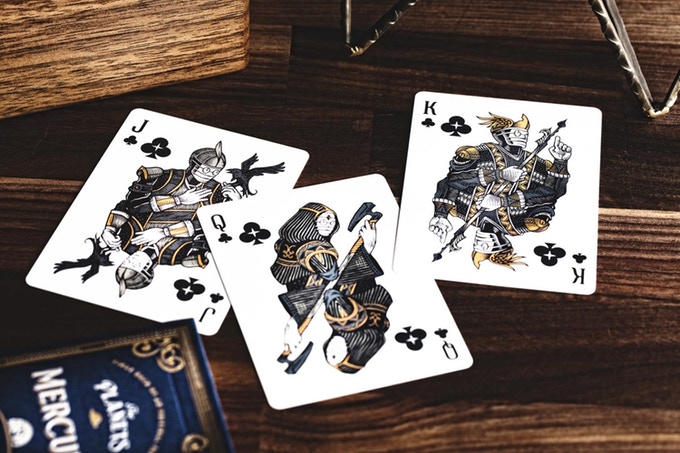 Tell us a little about your “Lousy T-Shirt” campaign.
Heh…that was a little experiment of mine that wasn’t much more successful than the name might imply. It was my playful attempt to create something with viral potential but it didn’t really take off. It had a very low funding goal since the minimum print requirement was very few shirts. The campaign was funded by a small number of people and I printed the shirts and sent them out, but it didn’t catch on in the way I had hoped and I’ve moved on to other things.

Your card decks are extremely collectible. Do you personally collect anything?
I have a handful of playing card decks created by other designers—a small select few that have grabbed my attention. I used to collect Magic the Gathering cards back in middle school and baseball cards before that. I also collected classical music CDs back in college but now they mostly sit in boxes in the storage shed. But I wouldn’t say that I’m actively collecting anything these days.

What advice can you give crowdfunding creators who want to run several campaigns and possibly use crowdfunding as a sustainable career path?
Start small and learn about all the aspects to running a business before pursuing any grand plans that are beyond what you’re capable of handling logistically.

Don’t underestimate your expenses and make sure you allow large enough margins to cover unexpected costs, especially in the beginning when you’re still learning about all the details involved.

Communication is the most important aspect to running a successful campaign. Your backers will be patient of delays and forgiving of your mistakes as long as you keep them updated regularly, even if you don’t think there’s anything noteworthy to tell them.

Stay organized. There are so many tools available today for project management and keeping track of other aspects of your business. If you can’t keep track of all the logistics, find and hire someone who is really good at handling that aspect of your business for you.

I highly recommend visiting the Kickstarter campaign page for The Planets: Venus card deck before it ends on February 18th, 6pm PST. And if you’re a collector, there is a reward tier you can support that will deliver all 8 decks once they are all printed.

Be sure to Subscribe to our Community Newsletter to get more creator interviews, in-depth crowdfunding guides & best practices, and exciting event updates!