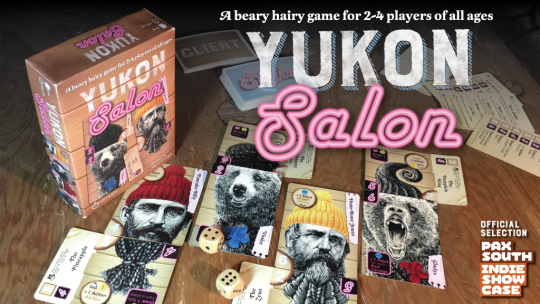 Landing a Game Review: Advice From an Editor and a Game Designer

David Fooden’s Yukon Salon is an unconventional card game. Its cast of characters include lumberjacks, grizzly bears, and duelling hairstylists. Presently, with over two weeks to go before its Kickstarter campaign’s completion, the project has met its funding target and unlocked one stretch goal. It has also managed to net plenty of blog coverage in the process, with mentions in gaming podcasts For All Intents and Purposes and Going Last, and reviews in blogs such as Junk Spirit Games, GeekDad, Indie Game Report, the Board Game Vault, among many others.

Securing reviews boost a project creator’s credibility, and are a handy way to generate publicity and expose the game to a wider audience and new backers. However, getting your game in front of a blogger or games publication can be challenging for first-time creators. Fooden and GeekDad senior editor Jonathan Liu share some wisdom from both sides of the divide.

Priming Your Game For Reviews

Liu’s inbox is inundated with pitches and requests for GeekDad reviews on a daily basis. He chooses which games to feature by considering its suitability for the GeekDad readership. “Even if it’s a game that I don’t personally think I would like, we do circulate the pitches among our team of writers to see if anyone else is interested,” he says.

Taste is subjective; what appeals to one reviewer might revile the next. Nevertheless, there are some general ideas on what constitutes an engaging game-playing experience. “Generally what I’m looking for in a prototype is the gameplay,” Liu says. “Are there interesting mechanics at work? Is there an interesting story? Is it fun to play?”

For game creators, extensive playtesting can provide invaluable feedback and ensure the game is ready for public consumption. Yukon Salon underwent many revisions in the leadup to its launch. “The first prototype had a rule set and went through many rounds of playtesting and iteration. I would playtest it and find out what worked and what didn’t and make changes,” Fooden says. “Refining the graphic design and the look of it was very important as well.”

Fooden asked for playtesting feedback from his friends in the gaming community as well as creators he’d met through events like the PAX South Indie Showcase, where was able to demo his game and generate buzz for his crowdfunding campaign. He also took it to Mox Boarding House for Playtest NW, where prototypes from Seattle game designers are playtested by the gaming community and the general public.

Getting reviewed on an industry-specific blog can help generate publicity and momentum, but timing is of the essence. Sending a press release about your game well ahead of your launch date (and following up via email) can increase the likelihood that it will be reviewed. Liu recommends that game creators get in touch with publications well in advance of their launch to give them a chance to playtest their prototype. “We get a lot of pitches where the project has already launched,” he says. “Or maybe it has launched a week ago or it’s launching tomorrow.” By that time, he says, it’s too late.

Liu urges game creators to budget enough time to make their prototype and send them to reviewers ahead of the campaign. “Arrange for a prototype about a month in advance of the launch if possible,” Liu says. “We typically say we want to arrange enough time for us to receive the prototype, be able to understand the rules in case there are any questions, play it a couple of times, and have time to write a review by the time the project launches.” He doesn’t expect to get a firm grasp of component quality from a prototype, although he says more games appear to have finished artwork by the time of launch. In any case, Liu says, he’s willing to overlook artwork or components if the gameplay is compelling.

Fooden sent out review copies of Yukon Salon two weeks before its Kickstarter launch, although he says games with more complexity should be sent out farther in advance. Card games are typically easier to playtest. “Before I launched the Kickstarter, I was mostly reaching people at conventions and going to events at local games stores,” Fooden says. “I reached out to other gamers and blogs, and secured some game reviews from bloggers of various levels of followings online.”

Fooden drafted a form letter that he sent to prospective game reviewers and kept track of his outreach via a “sizable spreadsheet”, and cast the net pretty wide. “I sent out press releases to any place that seemed like it might possibly cover it,” he says. A lot of local news outlets, blogs — anyone with anything to do with board games or card games, or websites that covered funny, quirky stuff.” Fooden reached out to approximately 22 reviewers, most of whom responded; he ended up getting 16 reviews. He notes that “it helped to have a how-to-play video to send them featuring the game artwork”.

Liu concurs, adding that it’s important to keep a blog’s readership in mind. “I always have to pay attention to whether or not it is something people are going to be able to play with their kids. It’s not our primary criteria … but that’s a bonus for our readers.” Suitability should be front of mind for game creators when they’re pitching publications — for instance, don’t pitch an adults-only game to a family-friendly website. He urges aspiring game creators to read GeekDad’s comprehensive guidelines on how to pitch the publication.

Liu encourages creators to contact GeekDad via email. “We don’t do as much ‘discovery’, where we look for a game on Kickstarter and say, ‘Oh, this looks good — I would like to review it,’” he says. This puts the onus on game creators to be proactive in their outreach strategies. “For new creators or first-time projects, we wouldn’t know about them unless they contact us. Once they’ve launched, it’s too late.”

Doing the rounds at conferences and game stores can help spread the word about a project and build support networks within the gaming community, makes your game and crowdfunding efforts more visible to the press. When it comes to garnering press mentions or blog reviews, it’s often not what you know, but who you know. Reaching out to other gamers is a great way for newer and inexperienced crowdfunders to learn the tips of the trade. What’s more, supporting and playtesting other games can help make a game the best it can be, and also generates goodwill.