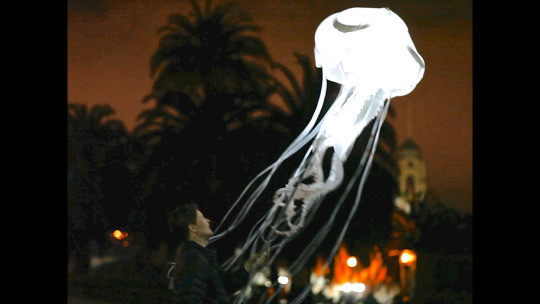 Soon she found the demand for her jellyfish spread beyond Burning Man. Lord and her jellyfish were getting hired at music festivals, aquariums, galleries, and weddings, and she began fielding queries from people who wanted to know if and where they could be purchased.

In 2013, the crowdfunding campaign for the OMG Jellyfish was born. “I wanted to make a product that you could take to a music festival, carry it, set it up when you needed it,” she says. But functionality was important too. “One of the use cases that made it a very pragmatic puppet was that some of the festivals are quite large, and one of the big challenges is staying together with your friends.”

Step One: Research Your Price Point

The cost of manufacturing the jellyfish’s inflatable chassis would be central in making it a functional, affordable product. Lord began to do her research.

“I thought, ‘What do people spend when they go to, say, Coachella? If we want to make a very durable product that’s not a throwaway at the end of the festival, that’s going to cost more money. Where’s that sweet spot?”

She looked at ticket prices, asked friends who regularly attended festivals, factored in discretionary spending on food and drink, and scoured Pinterest boards to see what people pinned — specifically the kind of equipment and gear they brought to festivals and how much it would typically cost — and then added these expenses to the ticket price to gauge a price range that consumers would be willing to accept: $125 to $175.

Lord’s team “had to make a few hard choices about lighting”. “We ended up buying an existing flashlight from Asia,” she said, which ended up being a dollar per unit, instead of using a brighter but more costly pre-LED technology that was heavily integrated into the jellyfish’s body. “It was going to be too expensive,” she says. “We would not have been able to manufacture it.”

Creators can achieve economies of scale by manufacturing larger quantities of units. At the same time, opting for a greater sales volume can incur additional risks and expenses for project creators.

“If we had built a jellyfish totem that could have sold for $85, our volume would have increased,” she says. “But the commitment in terms of the minimum order quantity for the components we were sourcing in Asia would have been 1,000 units — a big capital expense to put up front.”

Lord and her team elected to charge a higher price for the OMG Jellyfish, and base their Kickstarter campaign around a minimum need number of 250 units. Moving forward with the lower quantity also allowed the team to set a more reasonable goal amount, which can have a powerful effect on conversions because potential backers will see a $25,000 goal as more achievable than an $85,000 goal.

There were some points in the campaign when Lord worried that she didn’t aim for the higher goal. “It was day three when Boing Boing dropped their Twitter and blog about the OMG Jellyfish Kickstarter and we saw a huge increase in backers,” she said. “We knew Laughing Squid was also going to do an article, so we thought we were going to get another ramp up.” But, as it turned out, the Laughing Squid article resulted in little conversion of traffic to backers. In practical terms, this meant that Lord didn’t need to change her plans — she simply stuck to the production path she had established before the launch of the Kickstarter campaign.

The OMG Jellyfish’s initial funding goal was $25,000; at the end of the campaign, it raised $41,196 from 309 backers. It was a successful campaign, Lord says, but she sees some room for improvement.

If faced with an opportunity to a similar project a second time, Lord believes she would act more swiftly on creating pledge tiers to meet backer demand. When the project was featured on Boing Boing, there was a sharp upswing in traffic, which resulted in backers snapping up the OMG Jellyfish at the early-bird price of $125. However, once that allocation was exhausted, the next available price point for backers was $175.

Despite the attention from various blogs, the traffic didn’t convert into extra backers due to the high price. “That was too big of a jump,” Lord says. “It wasn’t until two days later that I added a new $150 tier.” The few backers that had pledged $175 were moved across into the $150 pledge level and credited accordingly. In hindsight, she says, she would have taken a more proactive approach.

“I wish I would have converted more backers and been more reactive to that in hours, rather than days.”

Traffic surges from media mentions are short-lived, lasting only a day or two. If your pledge tiers aren’t set to convert backers right when the traffic hits, you’ll lose those sales forever. Some creators increase the backer limit on ‘early bird’ tiers as they approach capacity to make sure that new backers can get in at the most attractive reward tier.

Step Three: Redesigning Your Product for the Market

The jellyfish’s chassis is made with a cast that costs $5,000, so “you only get to do that once”, she says.

“You really need to have your design right”.

So the OMG Jellyfish team attempted to find the best shape to hold the jellyfish’s various moving parts together (its snap-on ‘body’ and canopy) before settling on an inflatable, petal-like structure that sits atop a collapsible aluminum pole.

Lord was worried about how long production would take, particularly for components that were made abroad in Asia. In this respect, her fears were unfounded.  “Everything was air-freighted, which saved us a lot of time,” she said. “The actual production time was quite low,” she says, “and our products were light, so the air freight wasn’t going to kill us.”

“We had a lot more time for other backer categories because we had buffered the deliverable date by a month,” Lord says, but she didn’t want to let the early -bird backers down. So, with the help of her mother and three contractors hired from online freelancer marketplace Taskrabbit —  she took on the task of sewing and assembling the 80-odd jellyfish to distribute at Burning Man.