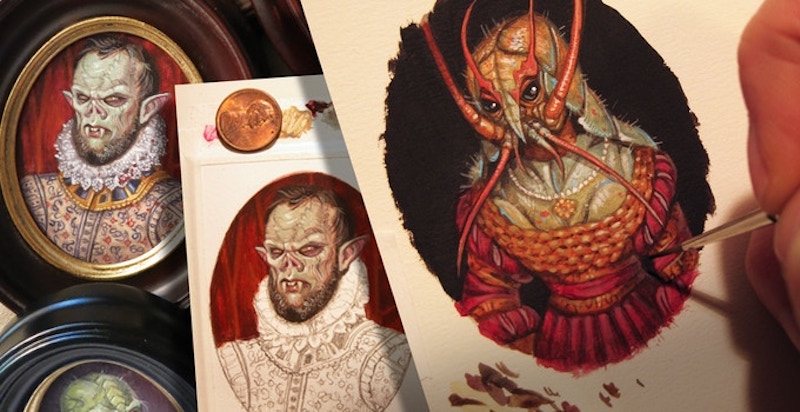 Creator Chris Seaman is the man behind the Cameo Creeps Tiny Monster Paintings Kickstarter Campaign. Cameo Creeps are highly detailed miniaturized monster paintings inspired by Elizabethan-era portraits. While Seaman draws inspiration from iconic pop-culture monsters, all his Cameo Creeps are original creations featuring fun and unique names. We were impressed with these collectible pieces of art and wanted to learn a little more.

What’s the coolest crowdfunding project you’ve ever seen? (Besides your own of course)
Some of the high-tech Kickstarter campaigns are always interesting to watch. I remember a laser pocket engraver project that was just so cool!  I love that Kickstarter allows entrepreneurs from all walks to create something new for our world, communities, and our society as a whole.

How did BackerKit change your overall experience?
Because my campaign had multiple choices for rewards, BackerKit allowed me to organize my Kickstarter campaign in a way that was easier for me. Keeping all my Backers organized with printable checklists helped shipping rewards much easier.  But above all, my favorite feature is the Pre-orders store.  I was able to continue to sell Cameo Creeps far after the campaign had ended.

Do you have any hobbies and/or collect anything?
I collect toys and mini-busts of my favorite pop culture characters. Toys have always inspired me to be a creator.  They massage my imagination and make me feel that any idea is possible.

What’s next? Any upcoming projects you want to share?
There are a lot of things for the Cameo Creeps Tiny Monster Paintings on the horizon, but the most important thing is that I’ll be launching a new campaign for the next set of Cameo Creeps on Kickstarter. Backers will get first dibs on all new Cameo Creeps for set 3. There will be new Kickstarter exclusives, new original Cameo Creeps art, and new product lines. So feel free to go to Cameocreeps.com and sign up on my mailing list to be the first to know when this campaign launches (Hint: very soon).

What’s your favorite Cameo Creep?
All of them are my favorites, but if I had to pick one, it would be the most popular Cameo Creep, Lady Miriam Lillithad.

What’s your favorite Con to attend?
My Favorite Con would have to be GenCon.  My bread and butter is in game art and I have attended that convention for the last 15 years.

Please take a second to check out the Cameo Creeps Pre-Order page to choose your favorite Creep, and head to the official Cameo Creeps website for updates and announcements!