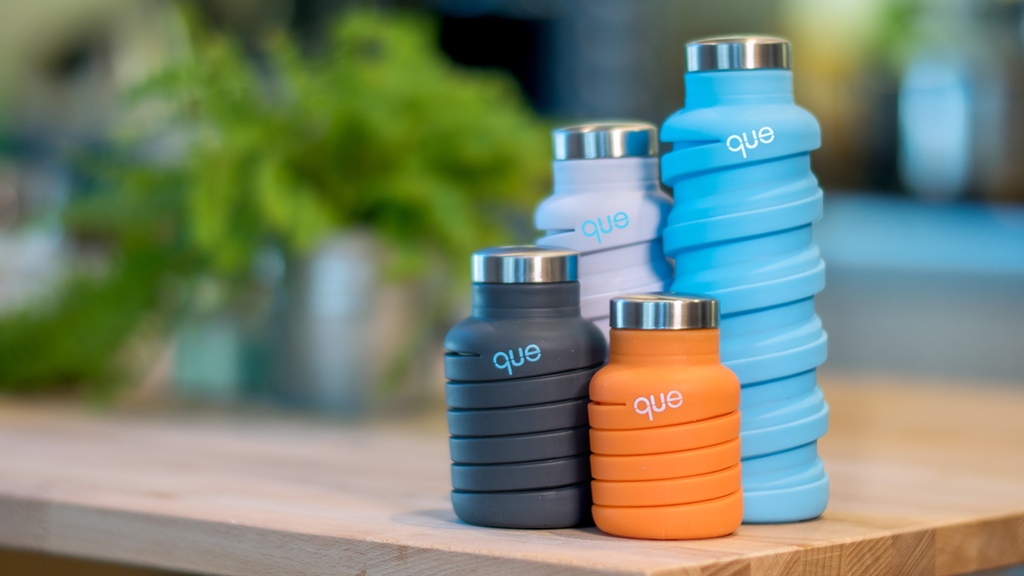 Mastering the Art of the Project Update

The crowdfunding journey spans many months: from mass outreach conducted well before the launch of a crowdfunding campaign to the fulfillment and shipping phases — and even beyond.

Project creators and backers alike are in it for the long haul, but the onus is on project creators to keep backers satisfied. Clarissa Redwine, Kickstarter’s West Coast tech lead, told audiences at BackerKit’s crowdfunding panel held earlier this year that constant communication could be seen as a part of building one’s brand. “It makes your life easy in the short term because backers are more likely to trust you and give you valuable feedback, and it also makes them remember you in the future.”

The case for regular project updates is a no-brainer. They keep backers engaged during the campaign and fuels anticipation for the project. They show backers that you’re working hard to get their rewards to them and ensures there are no nasty surprises when it’s time for fulfillment and shipping. But when things go awry, some project creators suddenly go dark, opting for silence rather than honesty.

Giving backers the silent treatment — unintentionally or otherwise — can cause irritation and mistrust among your most supportive advocates. Keeping the lines of communication open is the best way to manage expectations and address any concerns. Emily Nathan, co-founder of Tiny Atlas Quarterly, says creators should not lose sight of the most important part of their crowdfunding campaign: their backers. “So much of making a product is about the customer experience,” she says.

Nathan says that challenges can arise in even the most organized crowdfunding campaigns. “We had a plan for the timing of the campaign and had almost everything in place for that,” she says. But there was a hitch: the bags that were slated for her early bird supporters weren’t ready. “We have one of the best photo-led influencer networks in the world, and we didn’t have any product for them to start sharing that story.” When faced with setbacks, Nathan advises adopting a customer-centric approach. Acknowledging the backer’s situation and being empathetic to their feelings can help mitigate any disappointment from the backer’s end.

Writing an Update: Dos and Don’ts

A creative approach can make project updates more interesting, but ensure the tone is appropriate for the announcement. If you’re telling backers that their shipments will be delayed, it’s best to play it straight.

Some general rules: keep updates short, sharp, and to the point; express information succinctly; and acknowledge the role your backers have played in the crowdfunding journey.

The best updates are:

Other things you might include in your project updates: stretch goals, press coverage; fulfillment or manufacturing partnerships; appearances at panels or conferences; answers to common queries; changes in the production and shipping timelines for your project; and so on. Kickstarter has compiled a more comprehensive list. Vinson Leow of ASAP Technologies ends his Indiegogo campaign updates with a plug to projects he likes. 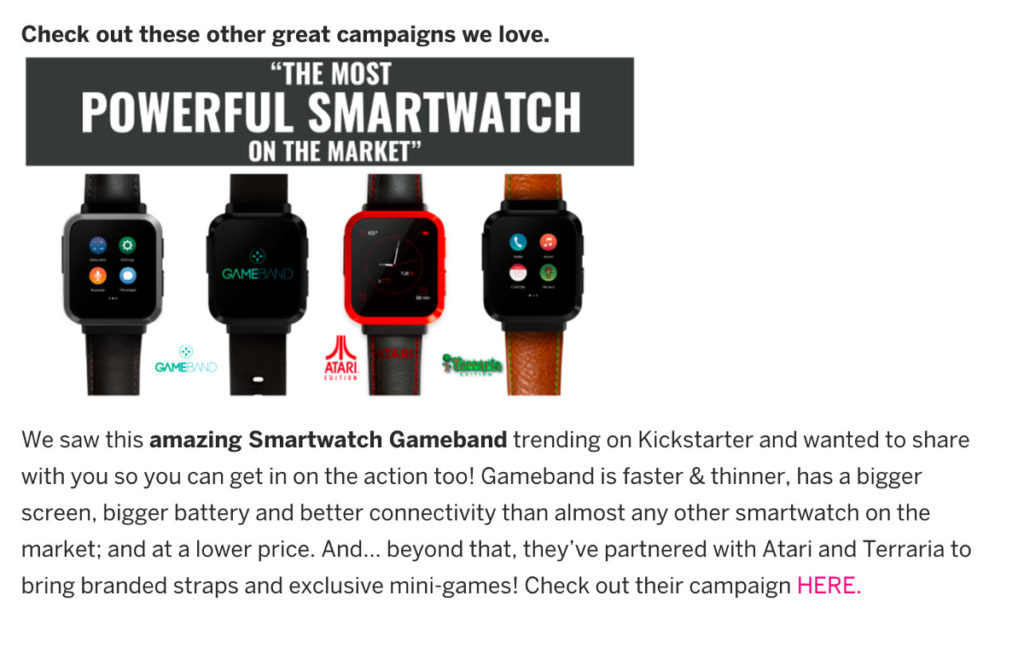 For Lay Waste Game’s Kickstarter campaign for Dragoon, they posted 72 updates, some of which are for backers only. One update informed backers of their forthcoming expansion and revealed some of the final card art; others signposted appearances at tabletop gaming conferences such as PAX, and opportunities for fans to playtest earlier iterations of the game. The team has also included an update on their first campaign page about their current Kickstarter campaign for Dragoon: The Rogue and Barbarian Expansion +Reprint.

Here’s an excerpt of a production update. You’ll notice the tone is enthusiastic, warm, and conversational, and the text is accompanied by images to heighten backer interest. 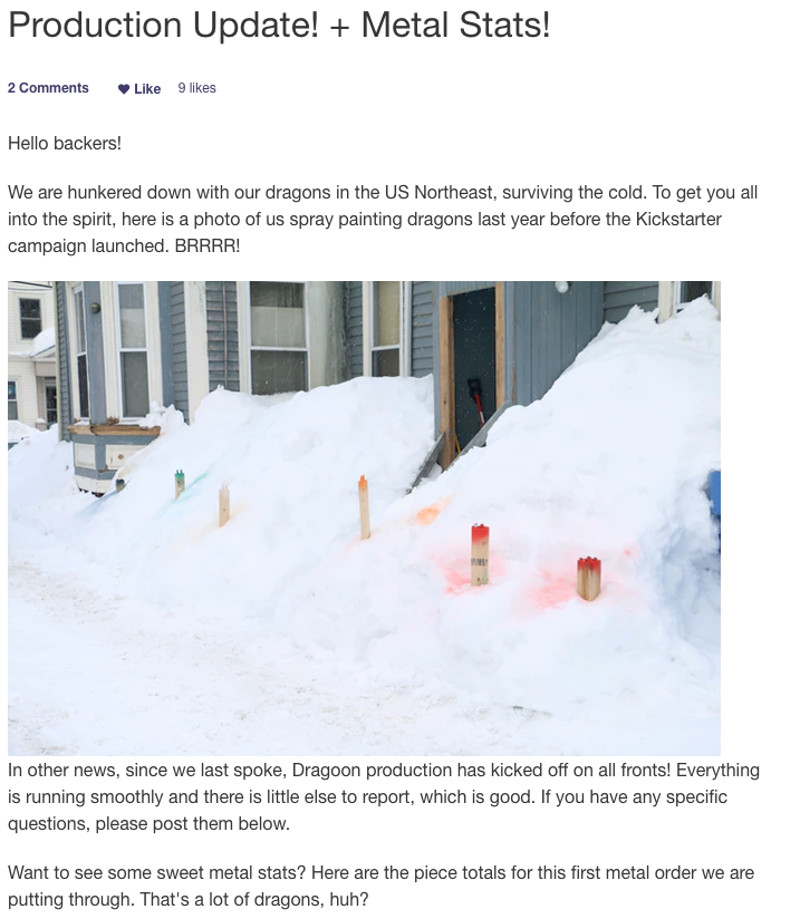 Stretch goals are tailor-made for project updates during and after a campaign has been completed. Highlighting stretch goals and associated rewards during a campaign engages your community of backers and makes them more determined to see your project meet these benchmarks. What’s more, you can update backers on the progress of your stretch goals once your crowdfunding campaign has ended. Ideas for post-campaign updates could include sharing more information on additional rewards and their production, as well as images that give backers a glimpse of what to expect. 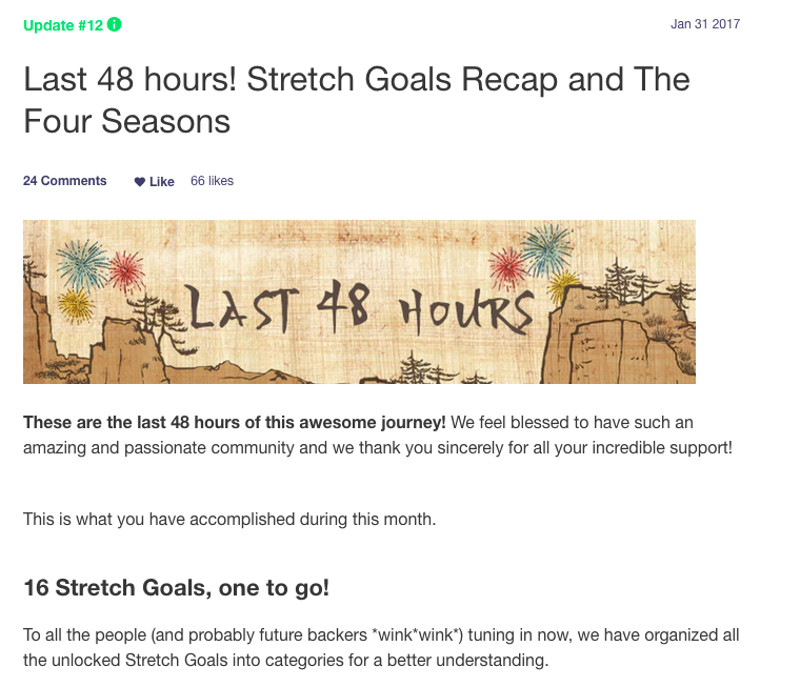 Which kind of update should I use?

Milestones achieved during a crowdfunding campaign —reaching a funding target, unlocking stretch goals, reaching a specific number of backers, mentions in the press—are best served by project updates that reach all backers. Updates can be marked public or for private (for backers only). They can be emailed to all backers of a project, or to a specific segment of backers (location, pledge tiers etc).

Post-campaign updates can be practical and creative. There are plenty of ways to engage backers during this phase. You might consider uploading photos that reveal a glimpse at a final prototype, or ‘behind the scenes’ images of items being packaged for shipping.

That doesn’t mean you should stay silent. There are other ways to communicate with backers on Kickstarter. Picking the right type of update will help communicate your message more clearly in a relevant fashion.

Project creators can respond to queries from individual backers by responding to comments on the campaign page itself. During the Kickstarter campaign for the Que Bottle, project creator Jean Wu checked the project page on a daily basis. “We responded to comments every day or once every two days, but we’ve only had 20 project updates throughout the campaign so far,” she says. “We wanted to make sure our project updates were relevant to all of our backers.”

How often should you update? It depends. Kickstarter’s handbook doesn’t specify the frequency, but recommends project creators update consistently and often. For some projects, a weekly update during the campaign might make sense, but there’s no golden rule. Indiegogo says project creators who provide updates “once every five days tend to raise 218% more than those who update less often”.

While it’s important to communicate after a crowdfunding campaign has been completed — you want to show backers you still have a heartbeat — project creators might want to consider dialing down the frequency and save updates for the most important announcements. Post too many updates once a campaign is completed and you are likely to get flooded with queries.

Responding to individual backers promptly demonstrates your gratitude for their support, and reminds them that there’s a human behind the project to assuage any concerns they might have. Building this trust will be especially important in the fulfillment and shipping phases of your campaign, where obstacles such as manufacturing delays are likely to arise. If you’re receiving a number of queries on the same topic, considering addressing them in a project update.

Kickstarter Live functions as an immersive marketing tool. It’s suited to exciting announcements or special events, such as the unveiling of a product or an exclusive Q&A with backers.

IndieGoGo’s updates function in a similar way to Kickstarter. Its guide says regular updates foster a sense of trust and community among a project’s backers. Crucially, regular updates also help Indiegogo project creators to increase their ‘Gogofactor’ — the platform’s algorithm that determines the placement of a creator’s project on the website, email campaigns, and so on. The website states: “The more you and your community interact with your campaign and share it, the higher your campaign’s GoGoFactor will climb.  The higher your GoGoFactor, the greater the chance your campaign has in getting featured on the home page, in blogs, and in Indiegogo press.”

At some point, project creators likely field complaints from backers who are dissatisfied with the progress of the campaign. An update about delayed shipping might spark many disappointed comments from backers. Zane Lamprey, TV travel show host and veteran project creator, says even the unhappiest of backers appreciate a personal response from a project creator. “It’s always good to remind people that there’s a person out there that they can talk to, rather than a robot they can vent their problems to.”

The first time you receive a complaint in response to an update might seem “mortifying”, Nathan says, but it’s crucial to take any criticism — deserved or undeserved — in your stride. Podo Labs’ Eddie Lee says it’s best to ““be prepared to be honest and open and real — and have a thick skin”.