Bond is our upcoming conference examining how creators make a living through the internet. On Friday, March 9th, 2018 we will be featuring an eclectic lineup of speakers who all have a unique perspective on what it takes to build community, share your work, and establish your creative practice as a sustainable, independent business. This is a guest post from Anxy Magazine’s Indhira Rojas!

Hi! I’m Indhira Rojas (you can just call me Indhi!). I’m the founder and creative director of the mental health magazine Anxy. Anxy is a bi-annual publication exploring vulnerable personal stories through an artful and creative lens. As a design consultant during the day, and a magazine maker during the “night”, my days are a balancing act of client requests, designing, art directing, and managing projects, plus addressing the new challenges (or adventures) that Anxy throws my way.

I’ve spent most of my professional career in the intersection of branding, editorial design and interaction, working for the tech and publishing sector. I’ve collaborated with businesses and organizations large and small, such as Atlas Obscura, Modern Farmer, Patreon, Obvious Ventures, and the online platform Medium. I hold a Bachelors of Fine Arts in Communication Design from Parsons School of Design and a Masters of Fine Arts in Design, from California College of the Arts.

I started Anxy because I wanted to present a counter-narrative to how mental health stories are presented. Instead of focusing on a particular diagnosis or on how to ‘fix’ an issue, Anxy invites people to explore their inner worlds and share their experiences. The magazine is structured mainly as a journal of personal essays, where the arc of the stories and how they interrelate with one another set the tone for each themed issue.

Anxy launched on Kickstarter in September 2016. We raised over $50k from over 800 backers in 30 days. Since then, Anxy has sold over 5,000 copies, gained nearly 400 new subscribers, and partnered with stockists around the world. Most recently Anxy won two Stack Awards (Launch of the Year and Subscribers’ Choice) and was highlighted by the New York Times in the Sunday Style piece, “Prozac Nation Is Now the United States of Xanax.” Anxy has been featured in Fast Company, Refinery29, HuffPo Health, among others. 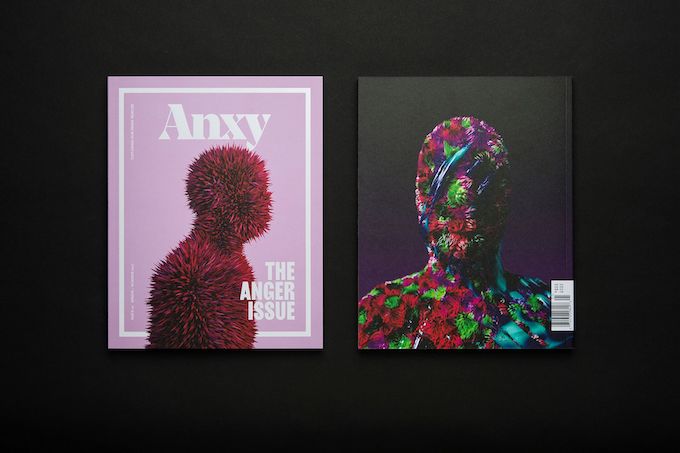 The inaugural issue of Anxy, Anger, features an interview with Margaret Atwood, reporting from the deep turmoil of Turkey to the front lines of customer service; beautiful and powerful photo essays from Matt Eich, Melissa Spitz, and Brian Frank; and writing from Ijeoma Oluo, Diego Salazar, May Wilkerson. It’s 144 pages of art, insight, and care.

The second edition, The Workaholism Issue, tackles what’s been called “the best-dressed mental health problem of all”—the addiction that’s more socially acceptable than any other. In fact, 1/3 of people identify as workaholics.

The magazine itself is a strikingly beautiful, but inside it really investigates the idea of workaholism across a range of different perspectives. From breakout comedy star Neal Brennan to Nepalese migrant workers; from those who are burning the candle at both ends in Las Vegas, to those who have experienced deep trauma at work. The issue also has real stories from teens at some of America’s most high-pressure schools, a perspective that is particularly worth reading. It includes artwork by artists such as Petra Eriksson, Ori Toor (cover), Billy Clark, and Talia Herman, among others.

I’m looking forward to meeting you all at Bond, until then—stay Anxy!

Be sure to head to the official Bond website for more details and announcements including our lineup of speakers and presenters. Space is limited, so reserve your tickets today!