Marketing for Kickstarter: How to Smash Your Funding Goal

Are you wondering how to drive more pledges to your campaign? It all starts with marketing. Let’s take a look at how marketing for Kickstarter and Indiegogo works and the strategies the top creators rely on to raise more funds during their campaigns.

As a crowdfunding creator, you can classify the people you’ll be marketing to into two groups: (1) People who already know about your project and are invested, and (2) people who you haven’t reached yet. You’ll need to take two distinct approaches when connecting with these groups.

Experienced creators likely already have a community of people behind them who trust them and are excited about their upcoming project. If you’re setting up a crowdfunding marketing budget and wondering where you should spend your first dollar, start with this existing audience. When marketing for Kickstarter, it’s a lot easier to get people you already know to visit your campaign page than it is to acquire new backers, so your money will go further with this group.

This community will help your campaign build momentum. Their pledges, particularly when those pledges happen early on in your campaign, serve as social proof, convincing other people to back your project. When someone sees that your campaign is doing well, they’ll want to jump on the bandwagon.

To mobilize your community, and make sure you’re reaching them with the right messages at the right time, develop an email messaging strategy. In terms of your timeline, you should be sending email messages at a few crucial moments pre-launch and during your campaign. These moments include, but are not limited to: a week before you launch your project, launch day, a few days after launching, and right before your campaign ends.

In each email, you’ll not only need to encourage your audience to pledge early but also drum up excitement for your campaign. Tell them what problem your product solves. Give them a behind-the-scenes look at your product development or prototyping process. Offer early-bird specials. Create a sense of urgency.

If you struggle to come up with email marketing messages or just want to make this process easier, BackerKit Launch can help. Launch is an email platform built specifically for crowdfunding. With email templates designed to be sent at strategic points throughout your campaign, you’ll have guidance on what to say and when to say it.

Unlike a standard email marketing platform, you’ll also be able to use Launch to refine your messaging as your campaign progresses. Launch allows Kickstarter users to track pledge progression in real-time (you are able to import your Indiegogo backer list, but only Kickstarter allows our system to track who has actually pledged or not). Using the platforms segmentation tool, you can divide your community into groups based on whether or not they’ve pledged. After segmenting your audience, you’ll be able to send targeted messages to people who haven’t pledged to encourage them to do so while also ensuring that you don’t over-message people who’ve already pledged.

You can also import past Kickstarter projects directly into Launch to see how many people on your email list pledged to previous campaigns and the percentage of pledges that came from past backers. With this data, you’ll have a sense of how many people from this group are likely to pledge to your campaign based on their past behavior and whether or not you have enough built-in support to have a strong first day. 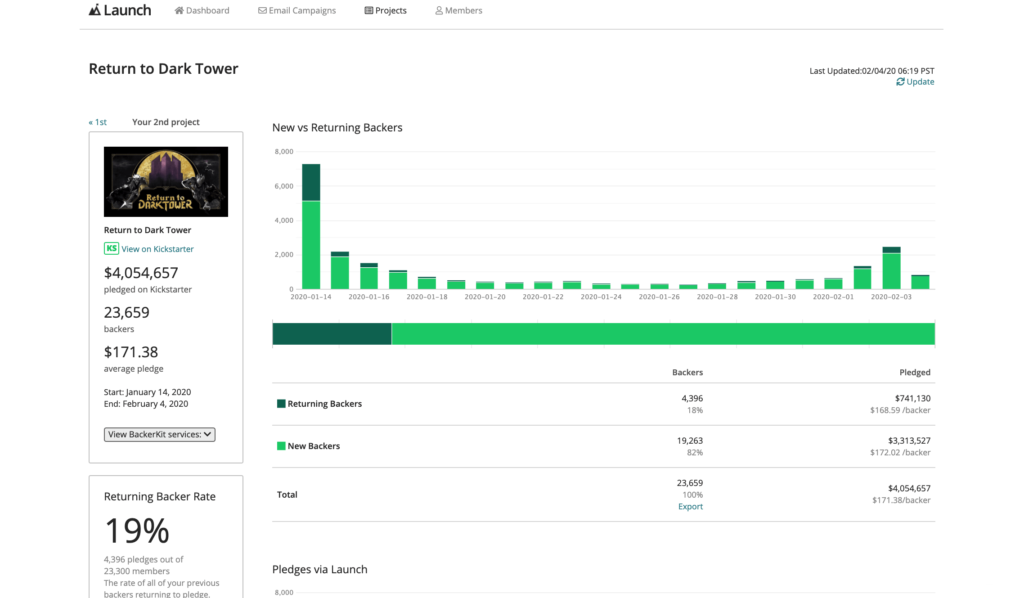 Once you’ve started connecting with your existing audience, that’s when you can scale up and start spending money where there’s more of a risk.

Paid marketing encompasses a whole spectrum of activities. Each of these activities varies in how effective they are in targeting the people most likely to be interested in your campaign.

Brand marketing: The goal here is to build brand awareness and tell a compelling story. Think about Super Bowl ads — they’re not very targeted, and it’s difficult to measure the results, but they reach a lot of people. Brand marketing is not going to be a good fit for a Kickstarter or Indiegogo campaign.

PR/influencer marketing: Here, you’ll identify people who may be social media influencers, bloggers, or other popular creators who produce content that is adjacent to the project category you’re working in and can help spread the word about your campaign when it’s live. This strategy can be helpful. However, it’s most powerful when used in addition to other promotional techniques.

Demographic and interest-based Facebook Ads: Through Facebook Ads, you can effectively target people interested in technology, design, gaming, Kickstarter, Indiegogo, and any other demographic that your “ideal customer” may fall into. You can also measure the results reasonably well through Facebook. This is something that you can do on your own.

Behavioral targeting: This type of targeting is the most precise and is achieved through performance marketing. Rather than merely targeting people who resemble the kinds of backers you’re hoping to attract, you’re targeting people who have performed actions or behaviors that would make them good prospects. Using behavioral targeting, you can connect with real people who have supported projects like yours and recommend your project to them through ads. This data makes your marketing dollars go further, which is why this type of marketing for Kickstarter is so popular with the top creators.

Although behavioral marketing has the strongest targeting capabilities, you can only access the audience data that you have personally collected to date, limiting the number of potential backers you’ll be able to reach. However, you can increase that audience by teaming up with a marketing or ad agency.

How a marketing agency works with you

A marketing or ad agency that employs behavioral targeting will recommend your project to prospective backers through highly-targeted Facebook Ads. And while you’ll find many different ad agencies and marketing services out there, crowdfunding creators must work with partners that have experience running ads for crowdfunding projects. Agencies that specialize in marketing for Kickstarter and Indiegogo not only understand which techniques work best for crowdfunding projects, but also have access to the audiences that are most likely to pledge to your campaign.

BackerKit, for example, has sent 17 million backer surveys in the eight years since its launch. A certain percentage of those people have opted in to receive recommendations. As a result, BackerKit has a deep well of backer data. We know when these people back projects and what their behavior is in BackerKit. Our marketing experts can then use this information to put together the most relevant group of people for your project. Just as a service like Spotify recommends music to people, connecting listeners to artists, we’re recommending crowdfunding projects to people, connecting backers with creators on Facebook.

You can’t achieve this level of targeting on your own. You have to work with an agency with access to your campaign’s most relevant audience and deep insights into how they behave.

To ensure that you’re getting the best return on ad spend (ROAS) — that is, the money you’re getting back for every dollar spent — you’ll obviously have to track ad performance. One common misconception that creators have is that they need to optimize for efficiency if they want to have a successful campaign. For example, they may think that every dollar they spend on ads needs to return $10, otherwise it’s not worth their time. While it’s important to look at efficiency, chasing those super-efficient returns doesn’t have to be your primary focus. But that super-efficient ROAS is only meaningful if it’s able to scale.

To understand how to measure your success, let’s take a look at two different scenarios. 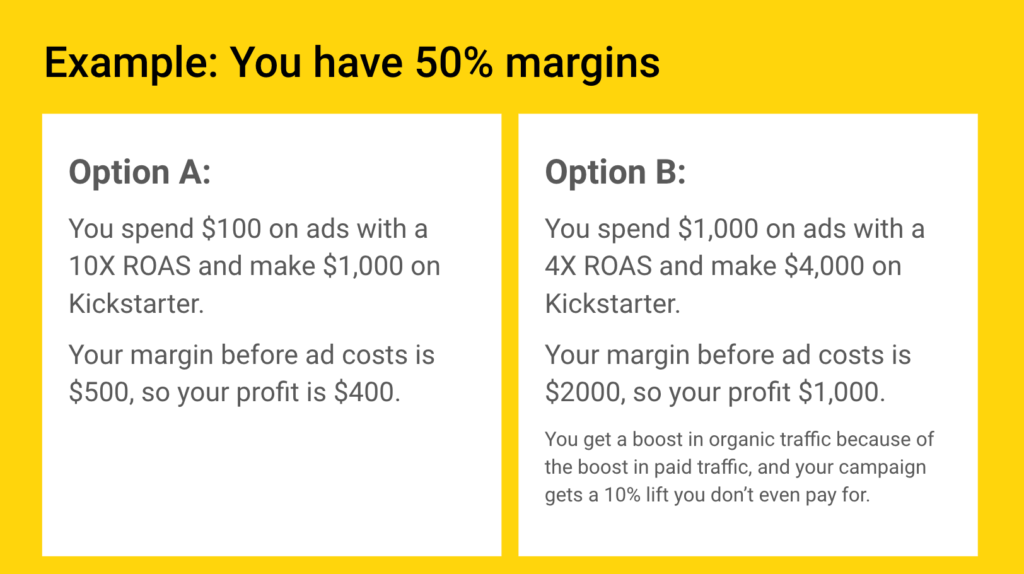 In the second example, you’re spending more money, but you’re getting twice as much back in pure profit. On top of this, you’re going to benefit from Kickstarter’s networking effects. When you’re able to drive more pledges to your campaign through ads, you’ll experience a boost in organic traffic because Kickstarter’s algorithm ranks projects that are doing well higher. This means that you’re going to get a lift that you don’t even have to pay for. It’s best to get your Kickstarter campaign as big as it can be as quickly as you can because everything will compound to bring more attention to your campaign and help you reach your funding goal.

When does running ads make sense?

Paid customer acquisition doesn’t work for every type of project. To make sure that you’re using your marketing dollars effectively, you should only consider working with an ad agency if you meet the following criteria:

Getting marketing assets for your Kickstarter or Indiegogo project ready

Once you’ve decided to engage with an agency, you’ll be required to send over assets — high-quality photos of your product. The images you choose can significantly impact the success of your ads, so you must get this right. Here are a few recommendations.

The gold standard for tabletop games is a totally stylized image that shows your box, components, minis (if you’re doing a minis game), and product art. You want to show everything that people will be getting. The image should make the game seem expansive and convince them that this is an experience they want to get into. 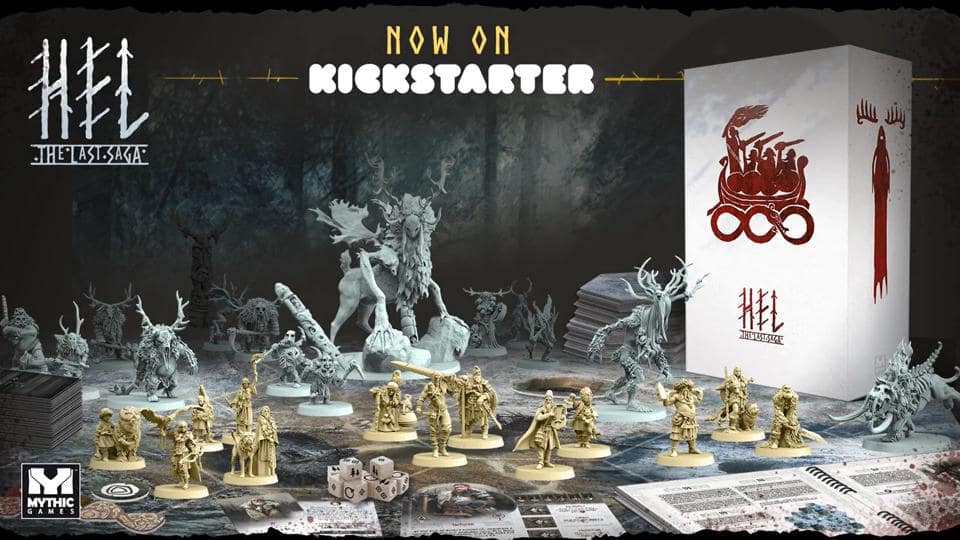 You’ll want to use images that contain the device or equipment that you’re producing. Showing the product in action is particularly effective. Devices and equipment pictured in a physical environment, demonstrating the benefits they provide, generally outperform studio product shots. It should be easy to understand what the product is. 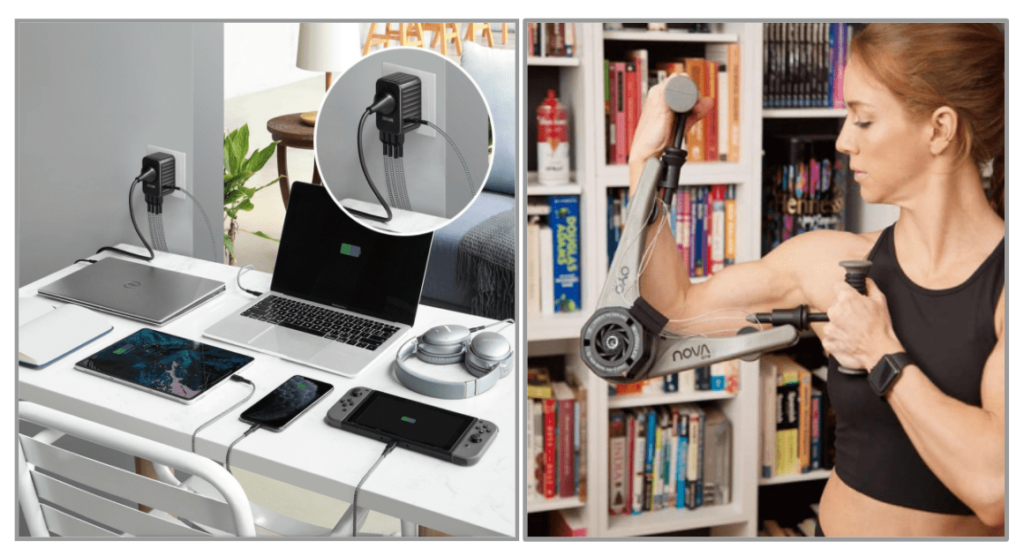 For example, this power bank image clearly shows how many devices can be charged at once while the image from the OYO NOVA campaign makes it clear that this product is an at-home exercise device.

GravGrip is a battery-free gimbal that keeps your phone level when you’re filming action shots. The campaign was launched on Kickstarter by Kevin Thomas, a first-time project creator. His funding goal was $20,000. 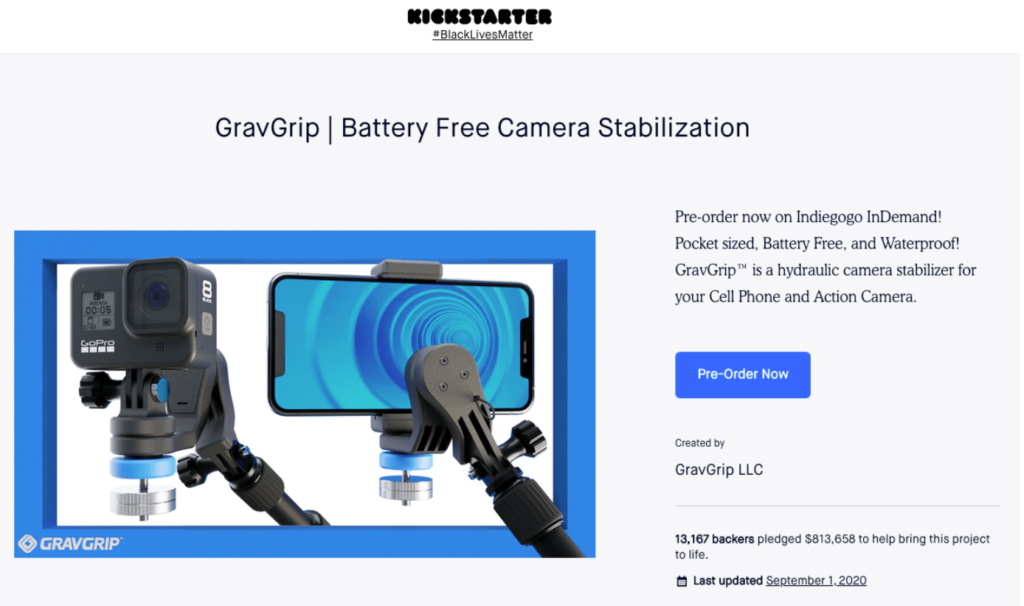 Before teaming up with BackerKit to run ads for his campaign, he had done the work. He had a great-looking Kickstarter page, and he’d put together compelling ad assets that showed the product in motion and told a compelling story. According to BackerTracker — a tool that shows trend projections and lets you know if your campaign is on target to meet its funding goal — Thomas was on track to raise $280,000 before getting started with BackerKit Marketing.

When a campaign is doing well like this, it’s the perfect candidate for performance marketing. In these cases, ads will amplify the work you’ve done. Once Thomas started running ads with BackerKit, the BackerTracker prediction went up almost 300% from $280,000 to $813,000 — a considerable increase.

Of those funds, only a fraction, around $350,000, is directly attributed to BackerKit’s actions. Thanks to Kickstarter’s network effects, the bulk of those funds are coming from that organic lift that occurs when a campaign is performing well. You can approximate how Kickstarter’s network effects are impacting your campaign by turning to BackerTracker. If your campaign starts to outperform its index, you can look at how much you paid for ads and compare that number to how much your campaign’s outlook has improved.

Find a marketing partner for your next Kickstarter or Indiegogo campaign

It may take some trial and error to develop the best marketing plan for your Kickstarter or Indiegogo campaign. But when you have experts at your side, you are in a better position to hit — or even surpass — your funding goal. If you’re launching your next crowdfunding campaign soon and want to get started with BackerKit Marketing, reach out to us to see if your project is a good fit for the service. 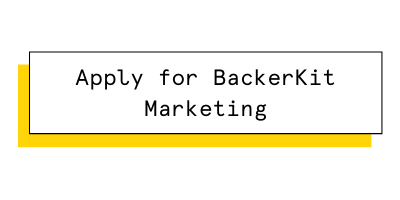